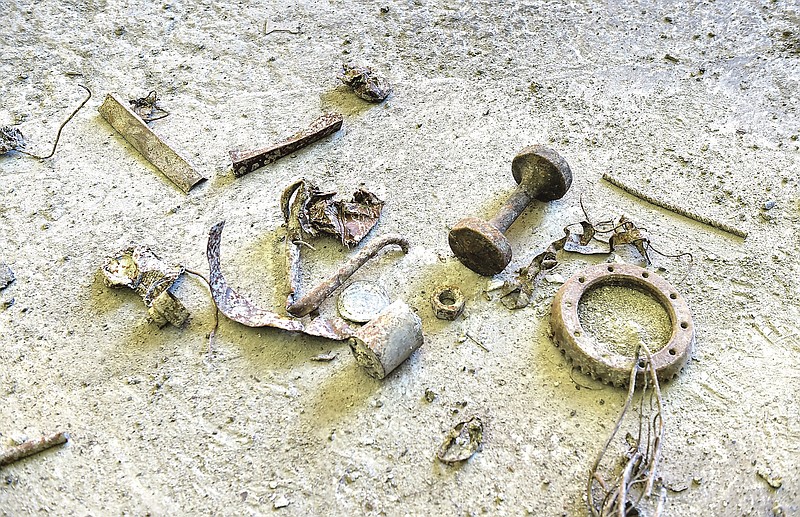 Debris and metal that went through the Lancaster County Solid Waste Management Authority's incinerator, is pictured on the floor beside a pit at the waste-to-energy facility in Bainbridge, Pa., on Wednesday, June 16, 2021. (Suzette Wenger/LNP/LancasterOnline via AP)

BAINBRIDGE, Pa. -- Piled in thousand-ton heaps, garbage was a putrid mountain, stacked about two stories tall in a concrete pit last month in rural Conoy Township, where the rubbish is seen as more than just discarded trash to be landfilled.

That's according to officials at the Lancaster County Solid Waste Management Authority, which is celebrating the plant's 30th year.

To date, 10.7 million tons of trash has been combusted at the facility, authority officials said.

"It's the best way to process on a mass scale at this place and time," authority CEO Bob Zorbaugh said, referring to the trash-related needs of the county's more than half a million residents.

That's true, Zorbaugh claims, even though the combustion process is not pollution-free.

"We don't want to pretend that the facility doesn't have any emissions. It does," he said before weighing that against the alternative.

"You know, most communities in the United States have just a landfill," Zorbaugh said. "Do you just want to landfill everything, or do you want to do something different with the technology available?"

The authority has a landfill, too -- the 96-acre Frey Farm site in rural Manor Township that began operating in 1989. However, the county likely would have needed two more landfills of the same size if it wasn't for the waste-to-energy program, said Katie Sandoe, an authority spokeswoman.

Space is saved because the process turns trash -- mostly the kind of rubbish that's put out for collection at the curb -- into ash, reducing its volume by 90 percent before it's sent to the landfill.

Over the facility's 30 years, that equates to a reduction of 17.8 million cubic yards of waste, enough to fill Penn State University's Beaver Stadium 12 times, Sandoe said.

Authority officials shared those figures before showing off the process last month, leading the way into the facility as garbage clattered to the floor from the back of a filled tractor-trailer before being pushed into the pit, where as much as 9,000 tons of rubbish can be piled.

Overhead, crane operators used massive, claw-like grapples to scoop trash from the pile before lowering it into chutes that feed the site's three boilers, which burn at a minimum of 1,800 degrees to each incinerate 400 tons of trash a day.

The heat warms water-filled tubes surrounding the boilers to create pressurized steam, which drives a turbine to generate electricity.

Running continuously, the process generates 36 megawatts of electricity at a given time. The facility itself consumes six of those megawatts, and the other 30 are sold into the local power grid -- enough to power more than 20,000 homes, Sandoe said.

Energy-related revenue from the facility's output amounted to about $9 million in 2020, Sandoe said.

Discarded metal items, not burned up in the process, can be recovered from the ash and sold into recycling markets, Zorbaugh said. He showed off piles of the reclaimed metal during the tour, pointing out dumbbells, lugnuts, tin cans, gears and mattress springs.

"We are able to extract and recycle thousands of tons of metal a year," he said, noting that those materials would have been landfilled without the combustion process.

Annually, metals recovered at the facility generate an average of about $700,000 in revenue, Sandoe said.

But for all of those reported benefits, Sandoe acknowledged that there are environmental drawbacks of running a 24/7 waste-to-energy facility, including emissions of harmful gases -- mostly carbon dioxide, which causes climate change, and poisonous nitrogen oxides that contribute to air pollution.

She cited U.S. Environmental Protection Agency data to compare the facility to the nearby Brunner Island power plant in York County, which in 2019 produced 2,158,706 metric tons of carbon dioxide equivalent emissions, or about 13 times more than the Waste-to-Energy Facility.

The average passenger vehicle emits about 4.6 metric tons of carbon dioxide per year, according to the EPA.

Critics have long expressed fears about the potential release of other toxic pollutants, including dioxins, toxic chemical compounds that can negatively impact human health.

Those concerns have existed locally since even before the $115 million facility was formally dedicated in June 1991, according to LNP archives.

"Let us not leave to our children and our children's children an inheritance of bad air, contaminated water," one letter writer wrote, opposing combustion at the site ahead of its opening.

Steven Mohr, chairman of the Conoy Township Board of Supervisors, recalled that opposition. He was on the board when the facility site, between River Road and the Susquehanna River, near Bainbridge, was first announced as a potential location.

"They just wanted to come up with anything they could to stop it," Mohr said, adding that police were asked to attend at least one related township meeting so "it didn't get out of hand."

To Mohr, it's the ideal location, tucked away from most developed areas on a rural road that can handle the hundreds of trash trucks that drop off waste at the facility.

The thousands of tons of smelly trash inside are barely detectable outside of the building's footprint, he said, an assurance authority officials gave him prior to the build.

"It lived up to the sales pitch," he said. "There isn't any negative."

Currently, there are no active local opposition groups to the waste-to-energy facility, Sandoe said.

Mohr said the per-ton host fee the authority pays to be sited in the township has been a major benefit to Conoy. Amounting to about $60,000 to $70,000 in revenue a month, the fee has allowed the township to eliminate local taxes, he said.

"Now all of those people that were against it, they want to help spend the money," he said with a laugh.

Still, the potential for pollution problems exists, according to the EPA, which notes a number of related regulations, standards and controls that were implemented to combat harmful emissions during the 1970s to 1990s.

As he led a tour of the facility last month, Zorbaugh moved outside to the back of the plant, where he pointed toward a collection of structures and stacks, all designed, he said, to control pollutants and ensure compliance with federally mandated standards.

Readings from those control systems are transmitted live to state regulators, and any interruption or violation of that process comes with consequences, Sandoe said.

"Some of the misunderstanding around modern waste-to-energy facilities comes back to this public memory of old incinerators of the '60s and '70s that did have a negative impact on the environment," she said. "That's not exactly what we are doing here."

Sandoe also touted the process as an environmental benefit, pointing out that burning trash for electricity eliminates the amount of raw waste left to rot in traditional landfills. Decomposing waste releases methane gas, a significant contributor to climate change.

While officials could not provide methane-specific numbers, it's been reported that every ton of waste processed in a waste-to-energy facility offsets a ton of carbon dioxide equivalent emissions, Sandoe said.

Zorbaugh said he hopes the authority will remain innovative, especially when it comes to new opportunities for recycling and reuse in the waste stream.

"But until that happens, we need to do something with this waste," Zorbaugh said, guessing that waste-to-energy will remain a viable option.

In fact, the facility was designed with the future in mind, built with extra space to allow for population growth. 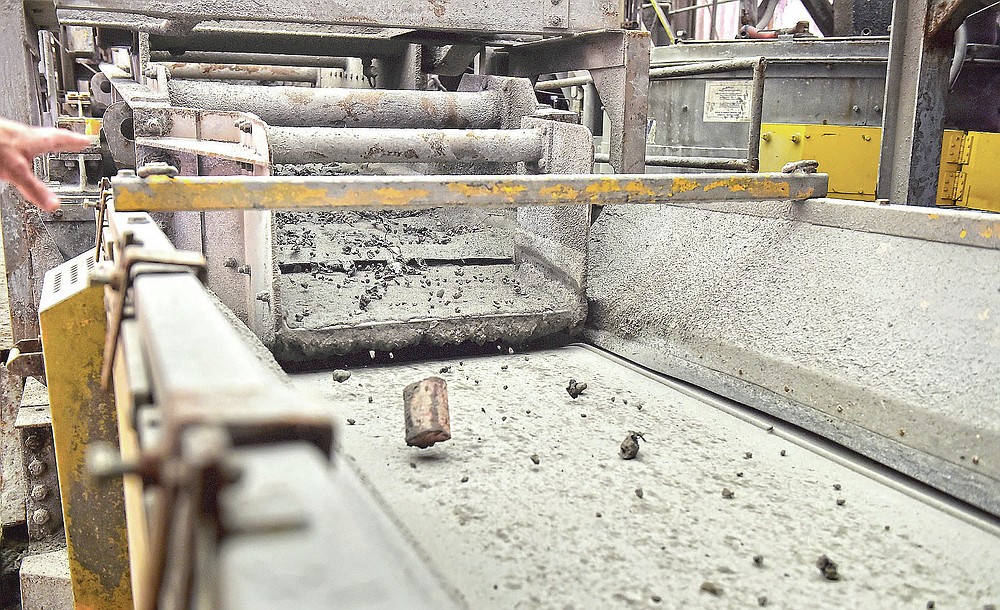 Ash, cans, metal and other debris moves on a conveyor belt after a cool down period during a tour of the Lancaster County Solid Waste Management Authority's waste-to-energy facility in Bainbridge, Pa., Wednesday, June 16, 2021. (Suzette Wenger/LNP/LancasterOnline via AP) 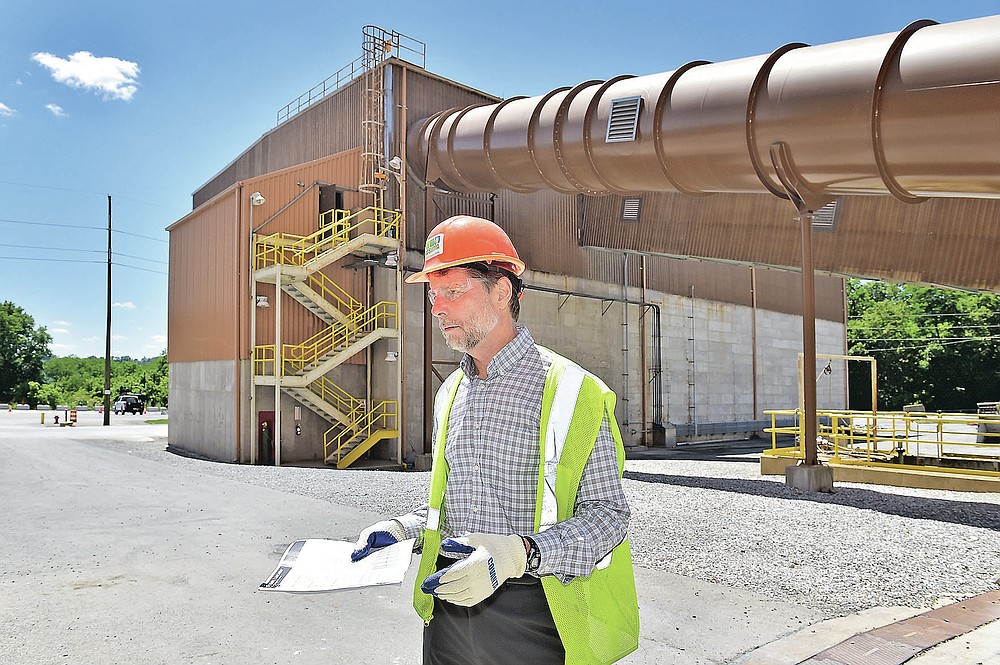 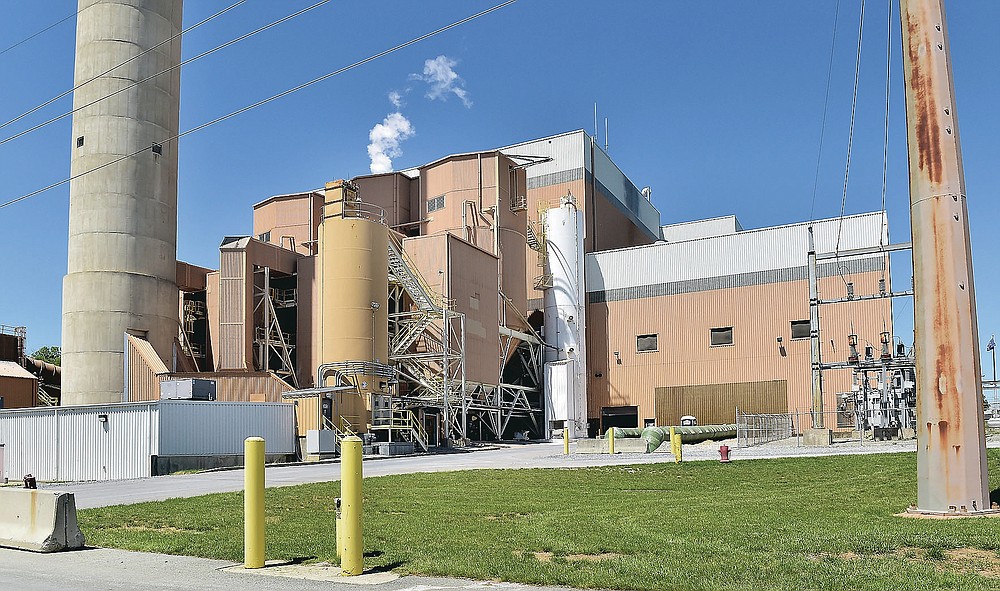 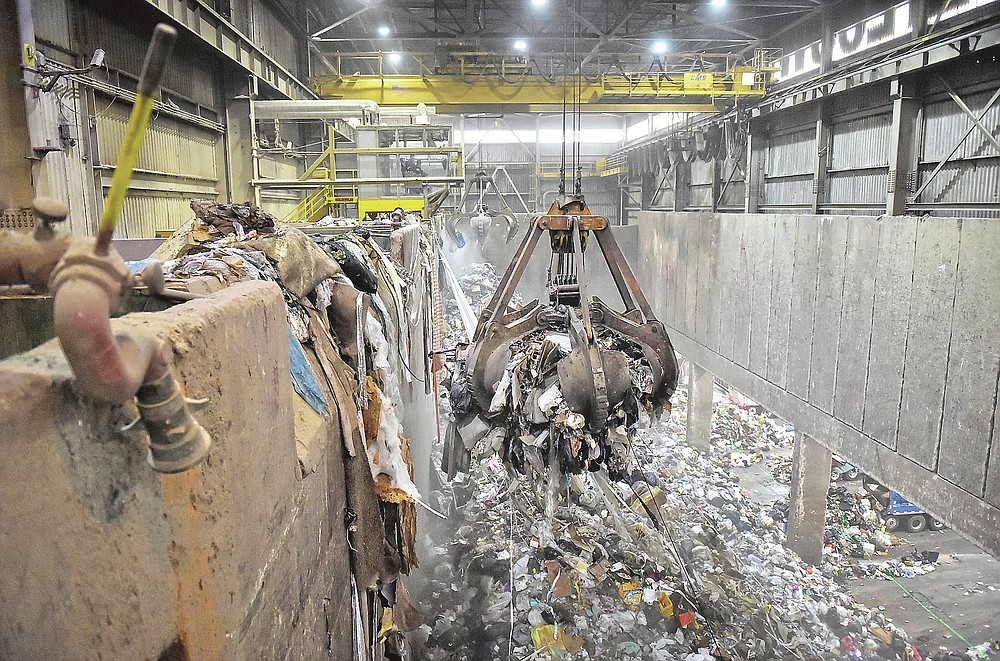 Operators control large grappling hooks to move garbage into a chute where the waste falls into the incinerator to burn during a tour of the Lancaster County Solid Waste Management Authority's waste-to-energy facility in Bainbridge, Pa., on Wednesday, June 16, 2021. (Suzette Wenger/LNP/LancasterOnline via AP)