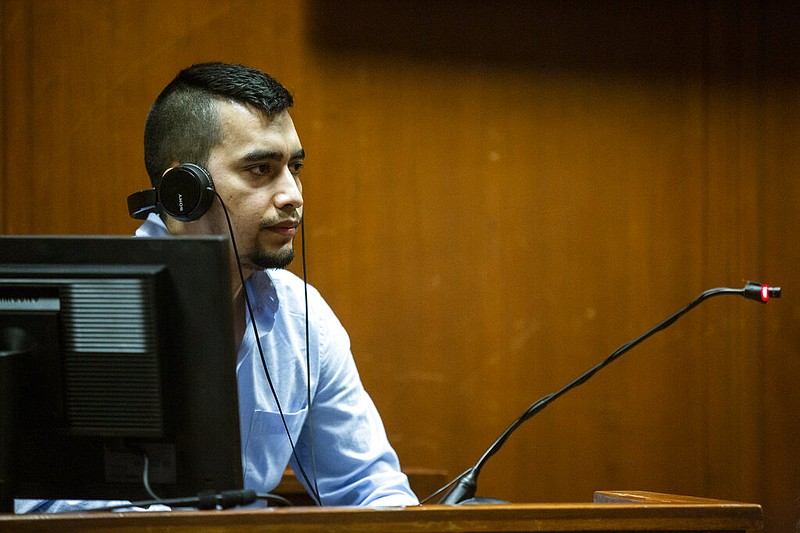 Cristhian Bahena Rivera testifies from the witness stand in the Scott County (Iowa) Courthouse at Davenport in this May 26, 2021, file photo. Bahena Rivera was charged with first-degree murder in the 2018 death of Mollie Tibbetts. (Kelsey Kremer/The Des Moines Register via AP)

Cristhian Bahena Rivera, 27, was scheduled to be sentenced to life in prison without parole Thursday before his lawyers revealed newly obtained information that they say calls his guilt into question.

Judge Joel Yates ruled Wednesday the sentencing would be delayed until after he holds hearings on the defense’s requests to compel prosecutors to release information about other suspects and to order a new trial. Yates said he would hold the first hearing Thursday at the Poweshiek County Courthouse in Montezuma and set a later date for the hearing on a new trial.

A jury in May found Bahena Rivera guilty of first-degree murder in the stabbing death of Tibbetts, 20, who vanished while out for a run in her hometown of Brooklyn, Iowa, in July 2018.

Prosecutors built their case on surveillance video showing Bahena Rivera driving in the vicinity of where Tibbetts disappeared while jogging, on DNA evidence showing that her blood was found in his car’s trunk, and on a partial confession in which Bahena Rivera led investigators to a remote cornfield where her body was found a month after she disappeared.

Bahena Rivera, a dairy farm worker, claimed publicly for the first time while testifying at his trial that two masked men were responsible for the killing and had forced him to drive them around and dispose of Tibbetts’ body at gunpoint. A native of Mexico who illegally came to the U.S. as a teenager, Bahena Rivera has been jailed since his 2018 arrest.

Defense lawyers Chad and Jennifer Frese requested a new trial last week, saying two witnesses recently came forward independently of one another to partially support Bahena Rivera’s testimony. The witnesses told investigators that a 21-year-old man with a history of violence against women had claimed responsibility for killing Tibbetts.

One of the witnesses said the man told him while they were at a county jail that Tibbetts had been kidnapped and brought to a “trap house” used for sex trafficking before she was killed, according to Bahena Rivera’s lawyers.

The man told the witness that the house was owned by a 50-year-old who was running the trafficking ring and decided to have Tibbetts killed after the publicity surrounding her disappearance got too big. The lawyers said the man claimed that he and an associate followed through with a plan devised by the 50-year-old to stab Tibbetts and frame a Hispanic man for the death.

The Freses said they learned Tuesday about a criminal investigation that centered on a 50-year-old man who allegedly met one of his sex trafficking victims in May 2018 at a gas station in Brooklyn, Tibbetts’ hometown of 1,700 people that is roughly 50 miles west of Iowa City.

The woman told investigators that the man lured her to a house in the nearby town of New Sharon, where she was repeatedly drugged, raped, and held against her will until August 2018, court records show. The woman said she sometimes would hear other women’s voices in the home.

Law enforcement officials used the information to obtain a warrant to search the home days after they interviewed her in March 2019, but it had already been vacated by the 50-year-old man. They did not charge him, and Mahaska County’s sheriff said recently the kidnapping and sex trafficking allegations were never substantiated.

Still, defense lawyers argue that prosecutors should have turned over details about the investigation under their duty to provide exculpatory information to Bahena Rivera. They said the potential existence of the “trap house” corroborates the new witnesses’ claims.

They are asking Yates to order the state to release information about prior sex trafficking investigations, including any involving the 21-year-old and 50-year-old. They noted that several other young people have gone missing from the area in recent years, calling that “very troubling.”

In court filings, the Freses noted that the 50-year-old man had come under scrutiny in the investigation into the disappearance of an 11-year-old boy, Xavior Harrelson. Xavior vanished from his trailer park in Montezuma on May 28, during closing arguments of the Bahena Rivera trial.

The defense filings noted the 50-year-old man is the former live-in boyfriend of Xavior’s mother. Investigators searching for Xavior began looking for the man and arrested him on an unrelated outstanding warrant in another county the day after the boy was reported missing.

Federal authorities detained the 50-year-old man last week on charges of illegally possessing a sawed-off shotgun. He hasn’t been charged in the boy’s disappearance.