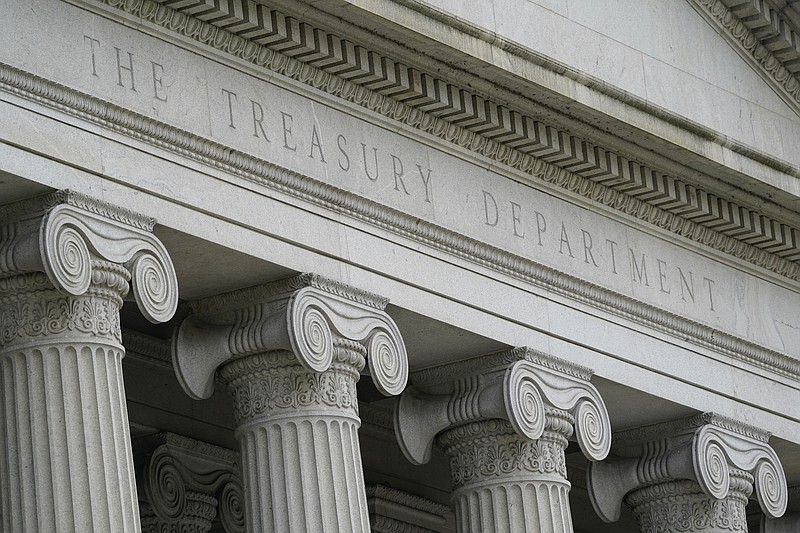 FILE - This May 4, 2021, photo shows the Treasury Building in Washington. The U.S. government's deficit for the first nine months of this budget year hit $2.24 trillion, keeping the country on track for its second biggest shortfall in history. In its monthly budget report, the Treasury Department said Tuesday, July 13 that the deficit for the budget year that ends in September is running 9.1% below last year's pace. (AP Photo/Patrick Semansky, File)

WASHINGTON -- The U.S. government's deficit for the first nine months of the current budget year hit $2.24 trillion, keeping the country on track for its second-biggest shortfall in history.

In its monthly budget report, the U.S. Treasury Department said Tuesday that the deficit for the budget year that ends on Sept. 30 is running 9.1% below last year's pace.

The deficit for the full 2020 fiscal year was a record $3.13 trillion. The Congressional Budget Office is projecting that the deficit for fiscal 2021, which began Oct. 1, will total a slightly smaller $3 trillion.

The deficits in both years were bloated by the multitrillion-dollar spending packages the government has passed to combat the economic downturns caused by the coronavirus pandemic.

Before the coronavirus pandemic, the previous deficit record was $1.4 trillion, set in 2009 when the government was seeking to offset a steep economic downturn triggered by the 2008 financial crisis.

So far this fiscal year, government receipts have totaled $3.06 trillion, up 35.2% from the same period a year ago. The number for last year was pushed downward by the fact that various tax deadlines were delayed, so revenue collections were lower because payments came in after June.

Spending in the October-June period totaled $5.29 trillion, up 5.8% compared with the same period last year.

The huge June 2020 deficit included $511 billion spent by the Small Business Administration, primarily for its Paycheck Protection Program of forgivable loans made to small businesses. By contrast, that spending category totaled just $31 billion in June of this year.

After the slight drop in the deficit this fiscal year, the Congressional Budget Office is projecting a further improvement to a $1.15 trillion shortfall next year.

However, those forecasts do not take into account the multitrillion-dollar infrastructure spending measures President Joe Biden is pushing to get Congress to approve. In his own budget, Biden is projecting the annual federal budget deficit will hit $3.7 trillion this year and will never dip below $1 trillion over the next decade.

Accumulating deficits add to the overall federal debt, which totaled more than $28.5 trillion as of Monday. That figure includes more than $6.1 trillion that the government owes itself, including about $2.9 trillion borrowed from the Social Security Trust Fund, according to Treasury Department reports.