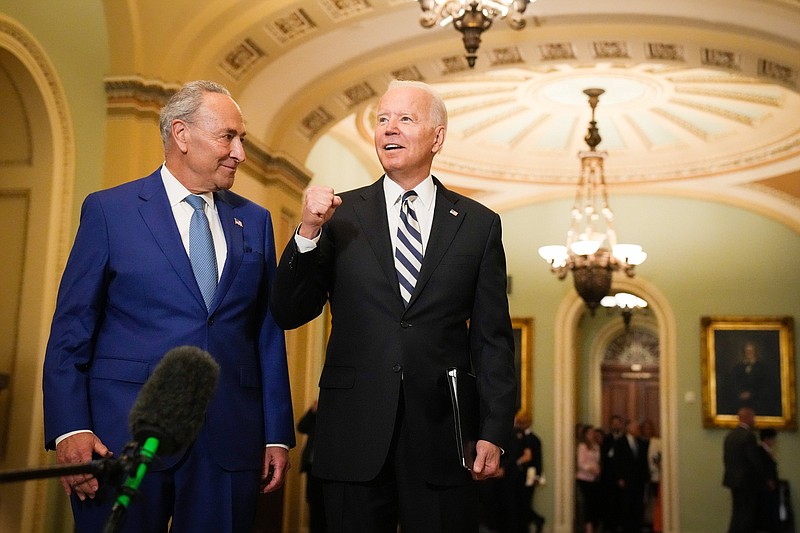 President Joe Biden made a quick foray to the Capitol on Wednesday hunting support for two bills totaling more than $4 trillion that advance critical elements of his economic agenda, including new investments for aging infrastructure, and programs to fight climate change and improve health care.

His visit took place a day after Senate Democratic leaders capped weeks of bargaining by agreeing to spend $3.5 trillion over the coming decade on initiatives focusing on climate change, education, a Medicare expansion and more. That's on top of a separate $1 trillion bipartisan compromise on roads, water systems and other infrastructure projects that senators from both parties are negotiating, with Biden's support.

The president spent just under an hour at a closed lunch with Democratic senators in the building where he served for 36 years as a Delaware senator and where his party controls the House and Senate, though just barely.

"It is great to be home," Biden told reporters after his first working meeting at the Capitol with lawmakers since becoming president. "It is great to be with my colleagues, and I think we are going to get a lot done."

[Video not showing up above? Click here to watch » https://www.youtube.com/watch?v=XPYmLNJeDg4]

Democrats' accord on their overall $3.5 trillion figure was a major step for a party whose rival moderate and progressive factions have competing visions of how costly and bold the final package should be. But many of them say bolstering lower-earning and middle-class families, and raising taxes on wealthy people and big corporations to help pay for it, would nurture long-term economic growth and pay political dividends in next year's elections for control of Congress.

Sen. Chris Murphy, D-Conn., said the president urged them to consider whether their plan would help people in Biden's blue-collar hometown of Scranton, Pa. "His point was that we need to be thinking about folks who have given up on democracy," Murphy said.

Biden's salesmanship opens a new political chapter in what will probably be a winding, tough debate on Capitol Hill in Congress, particularly because Democrats are divided over whether they should take the early deals they have reached, including with Republicans, or try to leverage their narrow majorities in Washington to seek more federal spending.

The president's efforts focus on two separate but intertwined economic packages. The first is a roughly $1 trillion infrastructure deal, which 22 Senate Democrats and Republicans brokered in principle last month. Lawmakers in the group gathered late Tuesday to continue the arduous task of transforming their ideas into legislation, with the goal of getting a bill to the Senate floor as soon as next week.

Only some of the spending Biden sought earlier this spring as part of his roughly $2 trillion jobs plan, and his subsequent $1.8 trillion families plan, is part of that bipartisan infrastructure package.

With unanimous Republican opposition likely, Democrats would need support from all their lawmakers in the 50-50 Senate and could lose no more than three votes in the House.

Sen. Lindsey Graham of South Carolina, top Republican on the Budget Committee, belittled the emerging plan as a wasteful liberal wish list that would fuel inflation and boost taxes.

"Count me in for real infrastructure. Count me out for a tax and spend plan from Hell," he said in a statement.

The reconciliation deal is larger than some spending-wary moderate Democrats want -- but smaller than liberal lawmakers initially envisioned, testing the party's appetite for political compromise.

Sen. Joe Manchin, D-W.Va., perhaps his chamber's most conservative Democrat, signaled he would oppose proposals to curb fossil fuels, long a lifeblood for his state's economy. His demands to trim other spending forced Democrats to drop a longtime progressive goal, a minimum wage increase, from pandemic relief legislation early this year.

Manchin said of cutting fossil fuels, which are major contributors to global warming, "It won't happen, it can't happen and it doesn't do a darn thing but makes the world worse." He said Democrats could achieve their spending plans "if they understand fossil is going to play a part."

Another key moderate, Sen. Kyrsten Sinema, D-Ariz., similarly signaled that she is waiting on further details. "Kyrsten is committed to working with her colleagues and the administration on ways to create jobs and expand economic opportunities in Arizona and communities across the country," a spokesman said in a statement. "Those conversations are ongoing, and she will give careful consideration to any idea that can strengthen Arizona's economy and help Arizona families get ahead."

Key backing for the overall plan has come from Senate Budget Committee chairman Bernie Sanders, I-Vt., a self-proclaimed democratic socialist and a leader of the Democrats' progressive wing. He's repeatedly called the agreement historic and said Wednesday that while he'd like more spending -- he earlier sought $6 trillion -- the reality is that all 50 Democratic senators are needed to prevail.

"This is the most significant piece of legislation passed since the Great Depression, and I'm delighted to be part of having helped to put it together," Sanders told reporters late Tuesday. But, he added, "a lot of work remains."

Details of the package began emerging, even though all are merely proposals that await final decisions later.

A senior Democratic aide said the party will seek extensions of tax credits for children, child care and some low-income people, money for environmentally friendly energy technologies and a federal standard aimed at encouraging a shift to clean energy.

The plan would fund prekindergarten for toddlers, aid for college students, paid family leave, food and housing programs, and a pathway to citizenship for potentially several million people in the U.S. illegally, said the aide, who spoke on condition of anonymity to describe Democrats' plans.

Also included is a top progressive priority -- an expansion of Medicare, the health insurance program for older Americans, to include vision, dental and hearing coverage. Sanders suggested there also might be an effort to lower that program's eligibility age to 60.

Sen. John Hickenlooper, D-Colo., said he thought the expanded Medicare coverage could be a selling point to the public. "The dental, especially, is a real issue for older people," he said.

That would be expensive, but the senior aide said Democrats also are looking at savings from letting the government negotiate prescription drug costs.

The aide said there would also be language barring tax boosts on people earning under $400,000 annually, on small businesses and on family farms.

Sen. Mark Warner, D-Va., a leading moderate, said the entire measure would be paid for with new revenue. Senate Finance Committee chairman Ron Wyden, D-Ore., said in an interview that he's working on proposals to "ensure that the superwealthy and mega-corporations pay their fair share" of taxes and for extra funding for the IRS to crack down on tax scofflaws.

The next few weeks could pose a critical test for the party's cohesion -- and Biden's influence on Capitol Hill. The president has maintained a desire to strike a bipartisan deal after securing passage of a $1.9 trillion coronavirus relief bill earlier this spring without any GOP support, though he has stressed that his willingness to negotiate is not endless.

Information for this article was contributed by Alan Fram, Lisa Mascaro, Kevin Freking, Mary Clare Jalonick and Jonathan Lemire of The Associated Press.