PODCASTING: Big news events revisited from behind the camera 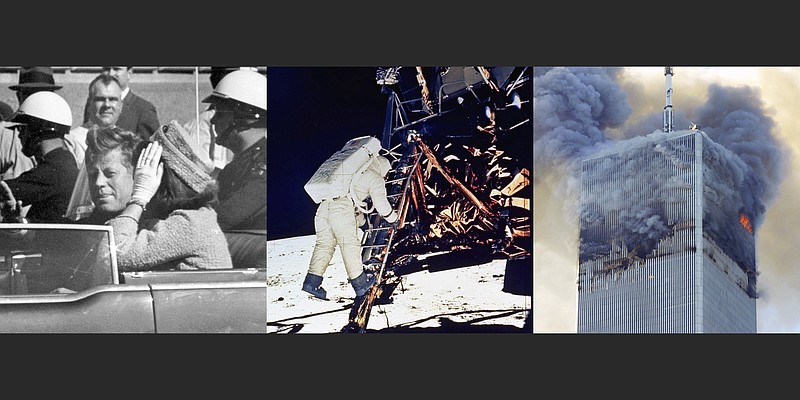 President John F. Kennedy rides in a motorcade with his wife, Jacqueline Kennedy, in Dallas on Nov. 22, 1963 (from left); astronaut Edwin E. Aldrin Jr., prepares to walk on the moon on July 20, 1969; and smoke billows from the north tower of New Yorks World Trade Center on Sept. 11, 2001. A new podcast based on Joe Garners 1998 book, We Interrupt This Broadcast, narrated by Brian Williams, will be available Tuesday. (AP Photo/NASA via AP/AP Photo)

NEW YORK — For a broadcast journalist, they are the moments that MSNBC's Brian Williams says you can almost feel people watching you.

Planes crash into the World Trade Center. A president is assassinated. An election is thrown into turmoil. The first human walks on the moon. Daily life is cast aside and people gather around televisions to soak in the news.

How TV and radio journalists handle it when history is suddenly thrust upon them is the subject of a new podcast based on Joe Garner's 1998 book, "We Interrupt This Broadcast." The 12-episode series, which Williams narrates, becomes available Tuesday, and new seasons are already in the works.

Hearing some of these moments as they unfolded is chilling, particularly if you were around to hear them the first time. In many cases, a journalist's mundane day suddenly turned into one of the most eventful of their career and all skills are brought to bear.

"You can't measure it when it's happening, but you do your level best," Williams said. "You will be remembered when people look back and see how we covered these stories."

While recordings from those days are obviously a big part of the series, Garner said he knew it wouldn't be enough for a podcast.

So the series draws on interviews from the people involved to give a richer perspective.

That's when you hear, for example, NBC News producer Beth O'Connell tell how she called staff members into a conference room after the planes hit the World Trade Center to urge them to take a few moments to buy some shirts and toiletries at Rockefeller Center. They were likely to be at work for a long time.

In 1968, annoyed astronaut Wally Schirra refused to turn a camera on during the Apollo 7 mission, illustrating how television coverage wasn't exactly a top priority of NASA. A year later, Schirra sat in a CBS studio beside Walter Cronkite describing the Apollo 11 mission that landed on the moon.

Cronkite figures heavily in the series. It was a seminal TV moment in 1963 when he took off his glasses to briefly compose himself after telling the nation that Kennedy had died.

One of Cronkite's former desk assistants, Mike Russo, is interviewed in the moon landing episode, as is Richard Nafzger, a NASA official responsible for making sure Neil Armstrong's first step on the moon was captured on camera.

"No one knows who I am," Nafzger said. "But if it failed my name would be all over the place."

One moment lost to history: NBC had prepared a space-themed entertainment special — with renditions of songs like "Moon Over Miami" — for the expected delay between the astronauts landing and Armstrong's moonwalk, but it was scrapped when he and Buzz Aldrin left the landing craft more quickly than expected.

A point that journalists repeatedly make is the need to stay calm in those big moments. One of Aaron Brown's most distinctive memories is repeating those words to himself while walking toward CNN's New York office to anchor CNN's Sept. 11 coverage.

"You kind of go into a mode," said veteran journalist Bill Kurtis, who participates with Williams in the series. "You don't allow your passions to take over. You adopt an insightful demeanor that you're going to do your job, which is finding facts and getting them on the air."

Unfounded rumors frequently fly in those situations, and a vital part of an anchor's job is not giving them oxygen. Williams recalled former ABC anchor Frank Reynolds' anger when forced to retract the erroneous report that Reagan press secretary James Brady had died in the 1981 assassination attempt.

Particularly on television during traumatic days, reporters often take on roles beyond journalism.

"It sort of becomes a chapel," Garner said. "It becomes a national hearth. We all gather there and figuratively hold hands and the anchor sort of gets us through it."

The podcast takes a potentially dangerous risk with two episodes imagining how historical events, like the 1919 passage of the 19th Amendment giving women the right to vote, would be handled by broadcasters. Those episodes weren't available for review.

Garner said he was struck by the self-evaluation many broadcasters offer of their work. The cliche is that journalism is the first draft of history. Those involved didn't have the chance to rewrite it.

"I hope that (listeners) get an understanding of the humanity at the heart of broadcast journalism," he said.