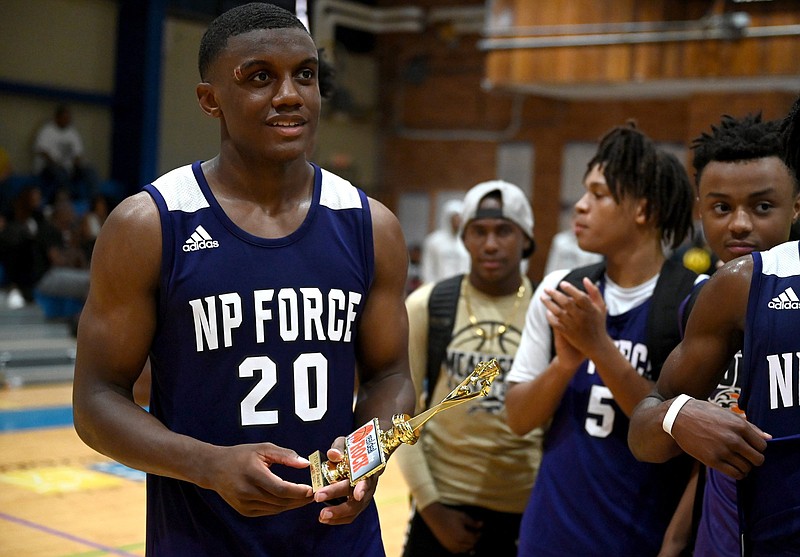 Derrian Ford accepts a trophy for MVP after his team, NP Force, won the Real Deal in the Rock 17U Championship game on Sunday, June 27, 2021. (Arkansas Democrat-Gazette/Stephen Swofford)

ESPN 4-star guard Derrian Ford of Magnolia orally committed to the University of Arkansas on Wednesday.

Ford, 6-4, 205 pounds, has more than 20 scholarship offers from Arkansas, Baylor, Kansas, Alabama, Auburn, Florida, Vanderbilt, Ole Miss, LSU and others. He made an official visit to Fayetteville on June 1-3.

He told Razorbacks Coach Eric Musselman and the Arkansas staff about his decision Tuesday and went public with it Wednesday.

"I just had a great bond with them and I talked to them almost every day," Ford said. "I just felt the connection, and then just staying home. I just want to represent for Arkansas. I just love Arkansas so much.

"The official visit was amazing. Whenever I went up there they always treated me and my family with the best hospitality. I just loved it so much. Arkansas has been nothing but a blessing to us."

He said he was feeling Arkansas long before his official trip to Fayetteville.

"It wasn't even the official visit, it was the talking. It was like I had known them for so long," said Ford, who also was named first team on the Arkansas Democrat-Gazette All-Arkansas Preps squad. "They showed so much interest in me and wanted the best for me."

He released his top 11 schools of Arkansas, Baylor, Auburn, Missouri, Kansas, Florida, Ole Miss, Alabama, Vanderbilt, Texas Tech and LSU on June 11. He told Musselman and the staff about his pledge during a FaceTime session.

"They were all excited. The whole coaching staff was right there," Ford said. "We had a great time with them."

"Another prospect who had an outstanding high school season," Biancardi said. "He has displayed effectiveness both inside and beyond the arc with his jumper. He creates space well for himself and can read the floor and make the assist.

"He also earns a fair share of points from the free-throw line at a good percentage."

Arkansas fans have been vocal on social media about wanting Ford to become a Razorback.

Musselman told Ford he can help him get to the NBA.

"He told me he just wants to get me to my dream, and I believe he can do it," he said. "I'm just going to be putting in a lot of hard work. Whatever I can do to help the team, that's what I'm going to do."

Ford is the third ESPN 4-star player to commit to Arkansas for the 2022 class. The Razorbacks also have commitments from Morrilton guard Joseph Pinion and small forward Barry Dunning of Mobile (Ala.) McGill Toolen. Oral commitments are nonbinding. 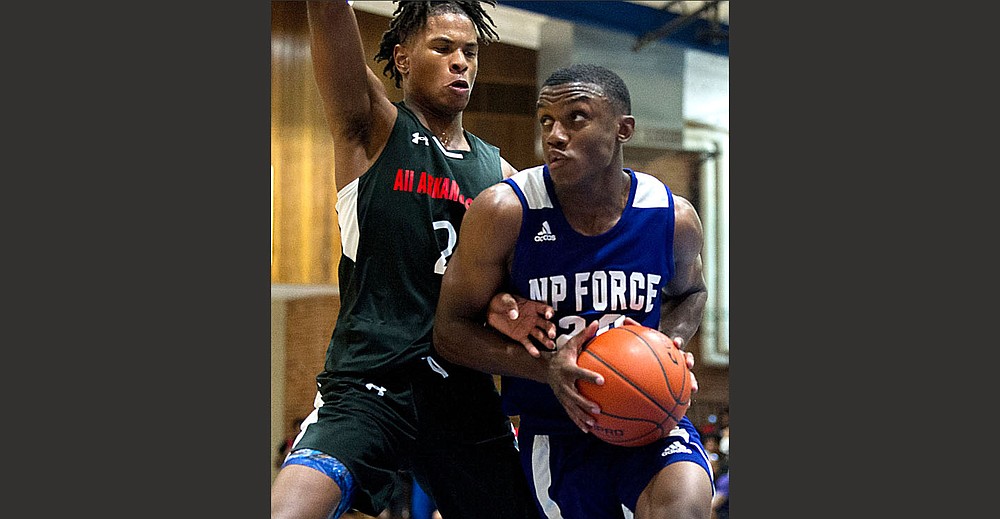 Guard Derrian Ford of Magnolia, shown playing for NP Force in last month’s Real Deal in the Rock, orally committed to the University of Arkansas on Wednesday. He chose the Razorbacks over more than 20 other scholarship offers. (Arkansas Democrat-Gazette/Stephen Swofford)