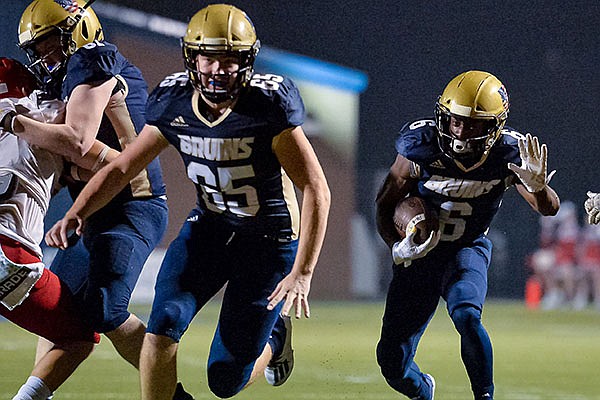 Pulaski Academy has seen its fair share of Division I prospects. Junior offensive lineman Allen Thomason is another who should garner looks from major colleges.

PA coach Anthony Lucas is high on Thomason and praises his desire to work on his craft before and after practice.

“Allen Thomason is a Division I offensive lineman,” Lucas said. “A phenomenal kid. This kid loves the game. He plays every play 100%. When he messes up, he gets so frustrated. He’ll watch film over and over, even on his own time.”

Thomason, 6-5, 250 pounds, was named to the Arkansas Democrat-Gazette Underclassman team after an outstanding sophomore campaign when he helped lead the Bruins to a Class 5A state championship.

He also sees Thomason being a Division I prospect.

“College coaches are looking for that length, long arms,” Barnhill said. “You get a kid like that in a college weight and nutrition program, they can put the weight and muscle on you. Allen has all those physical attributes — big shoulders, wide frame.”

Thomason’s athleticism and foot speed allow him to excel in space.

“He’s blocking corners, he’s blocking outside linebackers and those guys are tough to block out in space, and he’s able to do that,” Barnhill said. “He’s very physical in the box. He has those long arms and if he latches on to you, you can’t get off of him.

“He can definitely play upper-level college football; definitely Division I, for sure.”