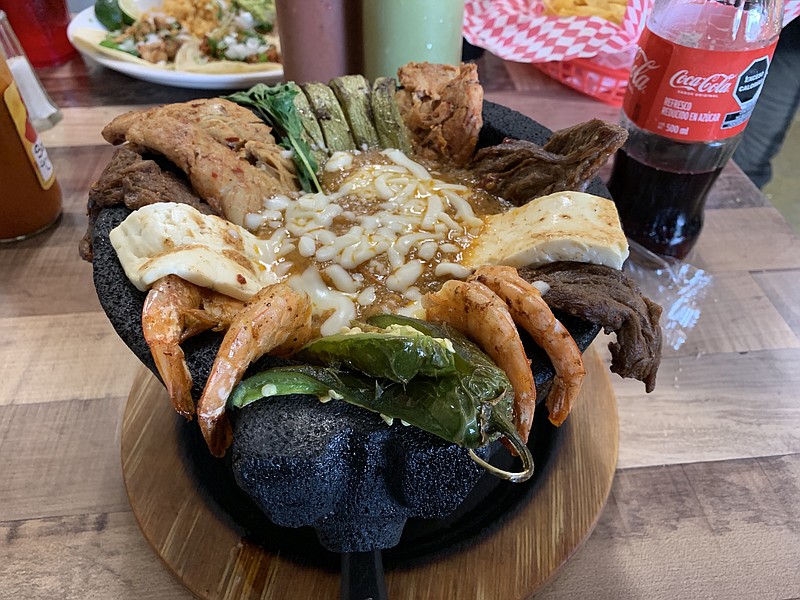 Molcajete La Pasadita — chicken breast, carne asada, mozzarella cheese and shrimp draped over the rim of a volcanic stone “cauldron,” which is filled with a sort of stew of chorizo, jalapenos, onions and melted cheese — is one of the house specialties at La Pasadita in the Market Place Shopping Center, 11121 N. Rodney Parham Road, Little Rock. (Arkansas Democrat-Gazette/Eric E. Harrison)

We weren't sure we were in the same restaurant.

Booths that had previously been in the back of the restaurant dining area were now arranged along the wall in the main room; tables with quasi-butcher-block composite tops were almost all in different positions than they had occupied before.

The menu didn't change between visits, thank goodness. Nor did the quality of the food, which has been consistently good over La Pasadita's three incarnations — as a walk-up taqueria in the former Hop location on Cantrell Road (since completely cleared), then as a taco truck situated nearby, and now in the cozy strip-center storefront that had previously housed B-Side and Lilly's Dim Sum Then Some.

The booths sport Mexican artwork; there's also some on the walls. A counter toward the rear is where staff dispenses to-go orders and where dine-in customers pay for their meals. The "soundtrack" on our two dinner visits came not from a sound system playing mariachi favorites, but from a flat-screen TV showing, peculiarly on both our visits, Asian-centered movies (an American film about a Chinese-immigrant-owned convenience store and subsequently a story of a Korean coach trying to shepherd a tiny school badminton club to championship status). Loud voices speaking Asian languages in a Little Rock Mexican restaurant is a first for us and took some getting used to.

If you need an object lesson in how shorthanded almost all area restaurants are, our first visit to La Pasadita — at a peak early-week evening period — was a case in point: The single front-of-house employee was completely in the weeds, trying to more or less simultaneously serve six tables (of two to four customers each) while answering the phone and processing several to-go orders.

We weren't surprised, therefore, to have to request drink and chip refills, nor, perhaps, at having our entrees take much longer — over 20 minutes — than would have been usual at a Mexican restaurant, where food usually emerges from the kitchen quickly. But having them arrive at our table almost 10 minutes apart — perhaps not.

Our second visit, also on a weeknight, was much calmer — there were fewer occupied tables, there was only one to-go order, and the (different) single server-cashier-bus person had an (underage) helper.

We cannot in any way fault the food. We highly recommend the Molcajete La Pasadita ($16.45), strips of well-spiced chicken breast and carne asada; two thick, rectangular slices of mozzarella cheese; nopal (cactus) strips; and shrimp, all draped over the rim of a volcanic stone "cauldron," which was filled with a sort of stew of chorizo, jalapenos and onions topped with melted cheese. It excels similar dishes we've had at other restaurants by a wide margin.

We have two small exceptions: The shrimp came in the shells, a little difficult to deal with while they were piping hot and when they're making contact with a sauce. And the strips of chicken and steak were extremely difficult to cut using the tiny, flimsy plasticware with which we were supplied (we're not sure if it's a holdover from the pandemic, or just that the server had run out of napkin-rolled silverware). Transferring a piece of steak onto the side plate, though it meant it got smeared with refried beans (a little soupy, but quite flavorful; entrees also come with a pleasantly, lightly flavored rice — could that be a touch of garlic?), was the only way to cut it without it becoming a wrestling match. 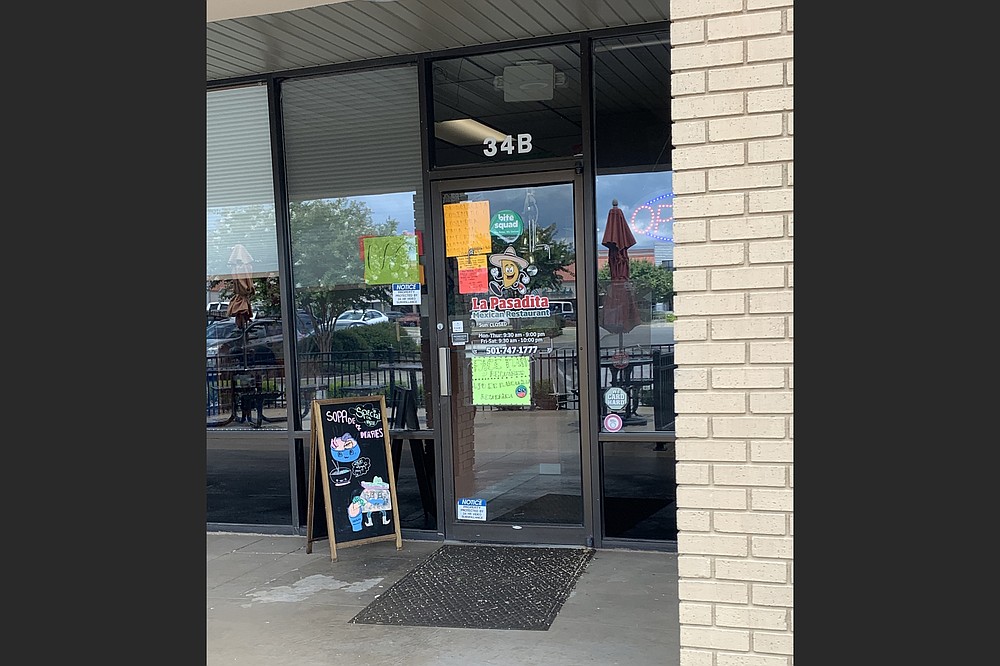 Considering that "taqueria" used to be part of La Pasadita's name, the three street tacos in our dinner Taco Plate ($12.45), while ample and tasty, didn't really bowl us over the way they used to in the Cantrell Road days when it was a hole in the wall. We chose three different tacos for variety's sake: chicken, chorizo and carne asada; the carne asada was the least thrilling of the three. The entree also comes with rice and beans.

We got real second-visit silverware with which to eat our pork tamales (the menu lists them as $2.35 per; we paid $4.65 for two), which come wrapped, not in corn shucks, but in banana leaves, two neat little packages served on a red-checked paper liner. (Chicken and corn are other options.) Unwrapped, the tamales are flatter than the Southern style but still plentifully full of moist, spiced shredded pork soaked in a moderately spicy tomatillo green salsa. The firm masa shells thinned out at the edges, which broke off into individual little quasi-tortillas that were fun to pull off the leaf and munch separately.

A worthwhile drop-in for lunch allowed us to sample the white cheese dip ($5 small, $8 large), with just the right light kick and of just the right thickness and smooth mouth feel. Our Enchilada Plate ($7.50) featured two enchiladas, lightly singed on the grill, filled and covered with that same white queso, plus rice, refried beans and a wee salad topped with a dollop of tangy guacamole. There was more "help" on the floor at lunch — two servers and the same (underage) assistant.

Chips on all three occasions were fresh, thin enough to crunch nicely but thick enough to stand up to the queso and to the red salsa, which had a nice, light kick, but varied a bit in thickness between dinner (chunkier) and lunch (thinner).

You won't see an actual check — customers must stop at the counter on the way out to pay for the meal, but there's "compensation" in engaging with one of the newest and technologically "cool" point-of-sale systems.