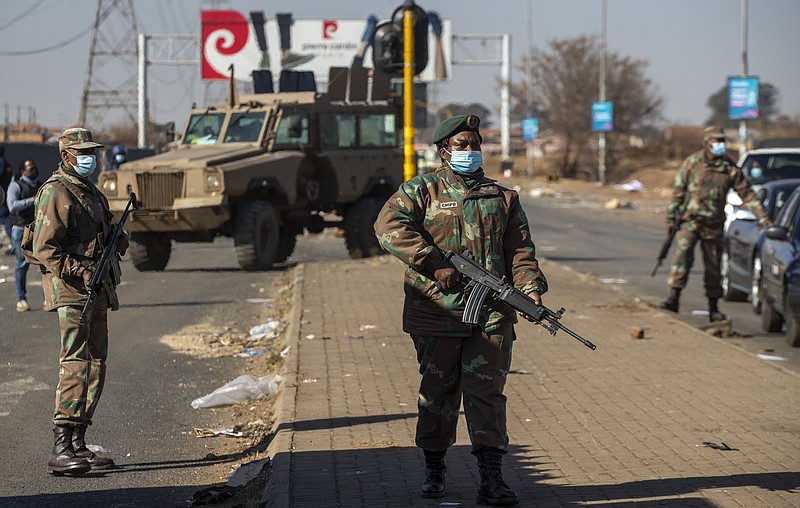 More than 200 violent incidents happened in poor areas of the Kwa-Zulu-Natal and Gauteng provinces overnight, the government said Wednesday, a week after the protests started.

The government doubled the number of soldiers deployed to assist police to 5,000 after days of rioting in which more than 72 people have been killed and 1,234 arrested, according to police. Many of the deaths were caused by chaotic stampedes as thousands of people ransacked shops, stealing food, electrical appliances, liquor and clothes, police Maj. Gen. Mathapelo Peters said.

The violence flared last week after Zuma began serving a 15-month sentence for contempt of court for refusing to comply with a court order to testify at a state-backed inquiry investigating allegations of corruption while he was president from 2009 to 2018.

The protests in Gauteng and Kwa-Zulu-Natal provinces escalated into a rampage of theft in township areas, although it has not spread to South Africa’s seven other provinces, where police are on alert.

A tense order appeared to have been achieved Wednesday by security forces in Gauteng, South Africa’s most populous province, which includes the largest city, Johannesburg.

CIUDAD VICTORIA, Mexico — Men dressed in military gear and carrying rifles burst into a holding facility in the Mexican border city of Reynosa, across the border from McAllen, Texas, and freed the leader of the Gulf cartel.

Prosecutors in the state of Tamaulipas said Wednesday that the raid occurred around 7 p.m. Tuesday after the man was detained by police near Reynosa.

He was being held pending an initial appearance before a judge. The attackers subdued guards and took the suspect with them.

Prosecutors identified the freed suspect by his nickname, “Calamardo.” That is the name used by Jose Alfredo Hernandez Campos.

Police searching for the raiders and the escapee were shot at by people in a vehicle, prosecutors said. They returned fire, killing one person in the vehicle and arresting another.

One of those suspects had an identification card purportedly from the Mexican Defense Department, though it was not clear if it was genuine.

Another two suspects were detained later.

TEHRAN, Iran — Iran’s outgoing president on Wednesday warned that his country could enrich uranium at weapons-grade levels of 90% if it chose, though it still wanted to save its tattered nuclear deal with world powers.

President Hassan Rouhani’s comments, carried by the state-run IRNA news agency, were made as he also criticized Iran’s wider theocracy for not allowing his government to reach a deal soon to restore the 2015 atomic accord.

Rouhani’s powers have waned as the public soured on his government as the economy suffers under U.S. sanctions. But his remarks signal Iran could take a more belligerent approach with the West as hard-line President-elect Ebrahim Raisi is to take office next month.

Speaking in a Cabinet meeting, Rouhani made the 90% remark, a rare moment for him to suggest Tehran could take that approach.

The 2015 nuclear deal, which saw Iran gain relief from crushing sanctions, limited Tehran’s program to enriching only up to 3.67% — enough to power a civilian nuclear reactor. It now enriches a small amount of uranium up to 60%, a short step from weapons-grade levels.

For months, negotiators have been trying to find a way for Iran to return to the limits of the deal and for the U.S. to rejoin the accord from which then-President Donald Trump earlier unilaterally withdrew.

JERUSALEM — The United Arab Emirates formally opened its embassy Wednesday in Israel, inaugurating its diplomatic offices in Tel Aviv less than a year after the two countries announced that they would establish open relations.

Speaking at the ceremony, Israeli President Isaac Herzog said the embassy opening was “an important milestone in our shared journey toward a future of peace, prosperity and security for the Middle East.” The UAE embassy’s inauguration takes place two weeks after Israel cut the ribbon on its embassy in Abu Dhabi during Foreign Minister Yair Lapid’s visit in June.

Israel and the UAE formally established diplomatic relations last year after decades of clandestine ties. The two countries signed the U.S.-brokered normalization agreement on the White House lawn in September, and a flurry of bilateral economic and cooperation deals in the months since.