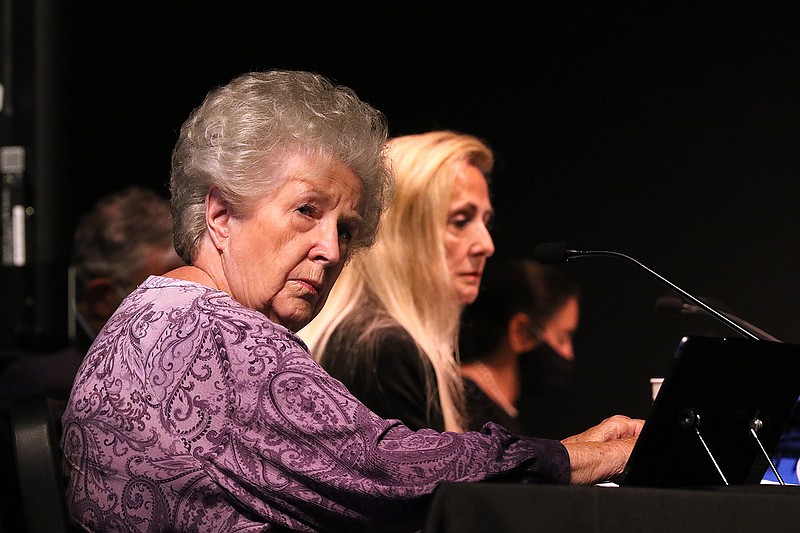 The Arkansas Ethics Commission issued a public letter of caution to at-large Little Rock City Director Joan Adcock over an impermissible campaign contribution from a trust that was accepted by her 2020 reelection campaign, according to a final disposition letter from the commission this week.

However, the commission declined to take action with regard to other reporting discrepancies in Adcock's campaign finance reports that were identified by a citizen complainant.

The commission this week also concluded a separate investigation into Ronnie Jackson, who served as Adcock's 2020 campaign treasurer, for accepting a contribution from an impermissible entity during his own city board campaign in 2018 and for failing to file a final report.

Like Adcock, Jackson was issued a public letter of caution.

The final disposition of the investigation into Adcock was laid out in a Wednesday letter to the city director from Arkansas Ethics Commission Director Graham F. Sloan.

Adcock signed a consent order with the commission in which it was agreed that the commission found that accepting the contribution constituted a violation, according to the letter.

"It should be noted that you have since returned the contribution in question to the David Parker Trust and filed an amended C&E report disclosing the returned contribution," Sloan wrote.

The commission decided Adcock did not violate the law when presented with other campaign finance reporting discrepancies and errors that were identified in the complaint.

Commission members voted 4-0, with one member absent, that no further investigation or action would take place after a June 18 meeting at which Adcock presented evidence regarding the other reporting errors, the letter said.

[DOCUMENT: Read the letters sent to Jackson and Adcock » arkansasonline.com/716ethics/]

In the letter this week, Sloan wrote that Adcock had been notified in an April 8 letter that a complaint had been filed against her and that the commission would commence an investigation with two primary prongs: one dealing with the impermissible contribution from the trust and the other with a variety of campaign finance reporting discrepancies and errors outlined in the complaint.

Those reporting errors included an October 2020 report filed by Adcock's campaign that showed two different figures, each supposed to show the amount of contributions received, with a $6,480 discrepancy between the two totals.

The October report also said the balance of campaign funds at the end of the reporting period was $8,026.47, which did not add up based on the listed loans, contributions and expenditures.

The balance of funds on hand should have been $11,546.47, according to Sloan's July letter.

Another item on the same report showed $10,000 missing from the balance of campaign funds at the end of the reporting period, Sloan wrote.

Additionally, a report filed Dec. 3 failed to show how surplus funds were disposed of or if they were being carried over, he wrote. Another report filed the same day listed carryover funds of slightly more than $2,000, and noted Adcock was holding $100 to replace a lost check.

"You presented evidence that the conduct identified represented unintentional errors in reports and that you corrected your reports within thirty (30) days [of] discovering or learning of the errors," Sloan wrote in the July letter.

Jackson was issued a public letter of caution because he failed to file a timely campaign finance report at the end of his 2018 campaign.

A campaign report from October 2018 reflected a $500 illegal contribution from a business, Carson and Associates, and a follow-up amended report still reflected the contribution, Sloan wrote in a July 13 letter to Jackson.

Jackson also failed to file a final campaign finance report at the conclusion of the 2018 campaign, the commission's director wrote.

However, as with Adcock's reporting discrepancies, the commission apparently felt that Jackson had satisfied the affirmative defense provisions with regard to the $500 company contribution and the uncorrected report that followed.

Jackson signed an offer of settlement and was issued a public letter of caution over the failure to file the final report, according to Sloan's letter.

The commission's investigations into Adcock and Jackson were triggered this spring because of complaints filed by Russ Racop, a local blogger critical of many of the officials who oversee Little Rock's municipal government.

In a post on his "Bad City of Little Rock" blog published March 21, Racop detailed Adcock's 2020 campaign finance errors, including the $500 trust contribution, as well as Jackson's based on their campaign finance disclosures.

Racop wrote that he had called Jackson in October 2020 while reviewing the campaign finance reports of Little Rock city board candidates and informed him of the $500 trust contribution to Adcock's campaign.

The blogger was himself a candidate for an at-large seat on the city board during the 2020 election cycle but lost to the incumbent, City Director Dean Kumpuris.

When reached by phone Thursday, Adcock said she had not yet received the final letter of caution from the commission.

She said she ultimately donated $500 to her own campaign, wrote the contributor, David Parker, a check for $500 and then amended her campaign finance report.

Asked about the other financial discrepancies mentioned in the commission's letter, Adcock attributed the problem to a $10,000 loan she made to her own campaign that was accidentally counted twice. She said Jackson was not the person responsible for the error.

She said she would rely on Jackson to manage her campaign expenditures in a future campaign, "if there was a next time."

When asked her thoughts on being issued the letter of caution, Adcock said she was told it was the lowest-level action by the commission, adding that "it fits because evidently, I wasn't too cautious -- I didn't know that law."

She suggested others were similarly unaware of the prohibition on receiving donations from trusts.

"I think probably lots of people do it. I don't know," Adcock said. "They just don't have a Russ Racop looking over their shoulder."

CORRECTION: Ronnie Jackson was issued a public letter of caution because he failed to file a timely campaign finance report at the end of his 2018 campaign. An earlier version of the secondary headline on this story mischaracterized the content of the letter.