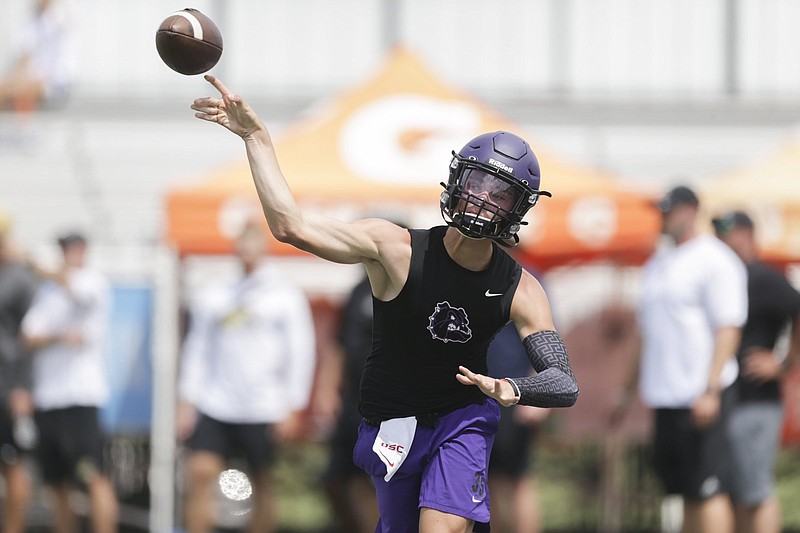 SPRINGDALE -- The celebration started on one sideline, but ended up on the other in a matter of seconds.

With the clock down to all zeroes, Fayetteville appeared to pull off a fantastic finish to the Southwest Elite 7on7 tournament Thursday at Shiloh Christian.

Trailing Heritage Hall (Okla.) 21-20, the Bulldogs appeared to have claimed victory on the final play of the championship game as rising senior quarterback Bladen Fike fired a scoring strike down the left sideline. But the Bulldogs' celebration was short-lived as Fike exceeded the four-sec0nd barrier to release the throw, thus negating the score and sending Heritage Hall into celebratory mode instead.

"That was amazing," said Heritage Hall coach Brett Bogert. "It looked like they were scoring a touchdown but luckily the sack was there. We had to come back. Obviously, Fayetteville is a historic program and we've had battles with them here before.

"It was a lot of fun. Our guys, a lot of them go both ways and they were able to dig down late. It's great to finally win this thing after coming over here for about 20 years."

Heritage Hall, a Class 3A team, relied on backup quarterback Liam Burton in the championship game and he delivered. Burton completed 4-of-6 passes on the Chargers' closing drive including a clutch third-down pass to Orie Walker to keep the drive alive. Burton hit Walker again for the go-ahead touchdown with just over 20 seconds left, erasing a 20-6 deficit.

"He actually starts as one of our receivers," said Bogert. "Our starter hurt his arm earlier in the day. So he took over and ran with it. He had a heck of a day. It was awesome. He played with a lot of confidence and really delivered for us."

The Chargers knocked off host Shiloh Christian 25-24 to reach the championship game, while Fayetteville rolled over Stillwater, Okla. 26-15 in the other semifinal.

[Video not showing up above? Click here to watch » https://www.youtube.com/watch?v=zB9gJlJKEWQ]

Fike had a big day for the Bulldogs and came within two-tenths of a second of delivering a title. The last pass was timed at 4.2 seconds, just barely past the four-second barrier. Fike, a rising senior, had touchdown passes on Fayetteville's first three drives and helped the Bulldogs to a 20-6 advantage before Heritage Hall rallied late.

"This was a great game and our kids fought hard," said Fayetteville coach Casey Dick. "We're super proud of our effort and the way they came out here and sacrificed all day. Anytime you play eight games in one day, then come back and play five or six again today, you get a lot of younger guys some valuable reps. I told them it was awesome to get out here and get a bunch of reps and get back to what we are going to be doing."

After a one-year hiatus because of covid-19 issues in 2020, the Southwest Elite returned this year with a field of 20 teams. The format was altered slightly from years past.

Bentonville and Greenwood also advanced to the final eight. Bentonville fell to Fayetteville in the quarterfinals 25-21.