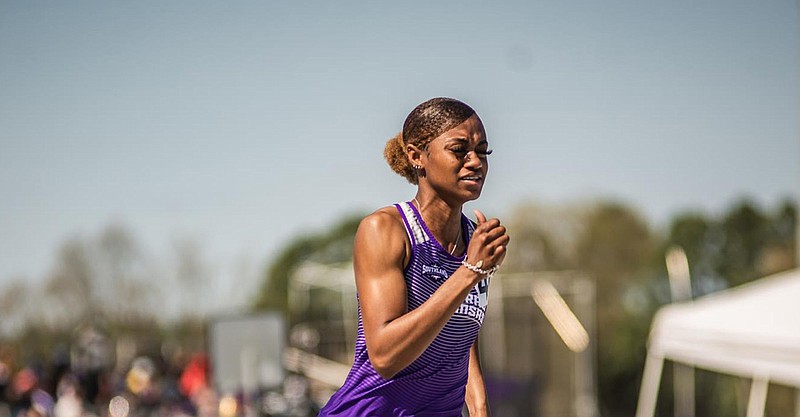 Central Arkansas sprinter Tyler Rose is one of the UCA athletes who is scheduled to sign a name, image and likeness agreement with the Conway Convention and Visitors Bureau. (Photo courtesy of the University of Central Arkansas)

The University of Central Arkansas athletic department Thursday announced a name, image and likeness agreement with the Conway Convention and Visitors Bureau, a partnership between athletes and a public entity that UCA says is the first of its kind.

Under the agreement, the visitors bureau is set to sign 30 UCA athletes to serve as "ambassadors and brand representatives" for the city of Conway, paid to promote the city of 66,127 and the amenities -- parks, restaurants and other entertainment -- it has to offer. The pilot NIL program, which also includes an educational training component, will feature a group of UCA athletes selected equitably across the school's 16 teams.

"We saw this as an opportunity to get a big stage for our community," Jamie Gates, executive vice president of the Conway Area Chamber of Commerce, said. "Conway has a great story to tell. It's a great quality place, and it's obviously a place where generations of young people have moved to and then thrived in. What better group of people to tell that story than these athletes?"

The visitors bureau has allocated at least $30,000 in the initial year to spread across its group of UCA athletes, with each expected to earn between $500-2,000 for their work advertising the city through social media, commercials, testimonials and other forms of content. The visitors bureau will select the remaining 28 athletes through a process focused on criteria including upperclassman status, strong academic standing, past on-field performance and social media following.

"All of the athletes will be paid for the volume and the quality of their work," Gates said. "This is a professional relationship. There's going to be opportunities for certain folks to work more and earn more."

In addition to their working partnership with the visitors bureau, the selected athletes will participate in a business course designed to educate them on NIL run by The Conductor, an entrepreneurial support organization based in Conway. Athletes will be paid $25 per hour to attend the mandatory sessions.

Included in the course outline are lessons on leveraging NIL and brand building, as well as sessions on business fundamentals, tax considerations and entrepreneurial mindsets in a program aimed at preparing the athletes for opportunities beyond the visitors bureau partnership.

"I think this program has hit on all the key issues for any student entering into an agreement like this," UCA Athletic Director Brad Teague said. "I think they're going to help educate our student-athletes greatly."

The inaugural group of athletes involved will represent only 10% of UCA's student-athlete population, leaving a vast majority to fend for themselves with NIL in the first year. Beyond Baker, who has 83,400 followers on TikTok, and a program record-holder in Rose, the visitors bureau may look toward athletes such as football quarterback Breylin Smith, softball's Lindsey Williams and beach volleyball's Aly Brinkley, all of whom hail from Conway.

In an NIL landscape that Baker called "uncharted territory," the visitors bureau agreement provides a structured introduction to NIL for many athletes.

"I think this is everything I was looking forward to about NIL," Baker said. "We're all kind of excited for whatever options are down the road for us. I think this is the perfect opportunity." 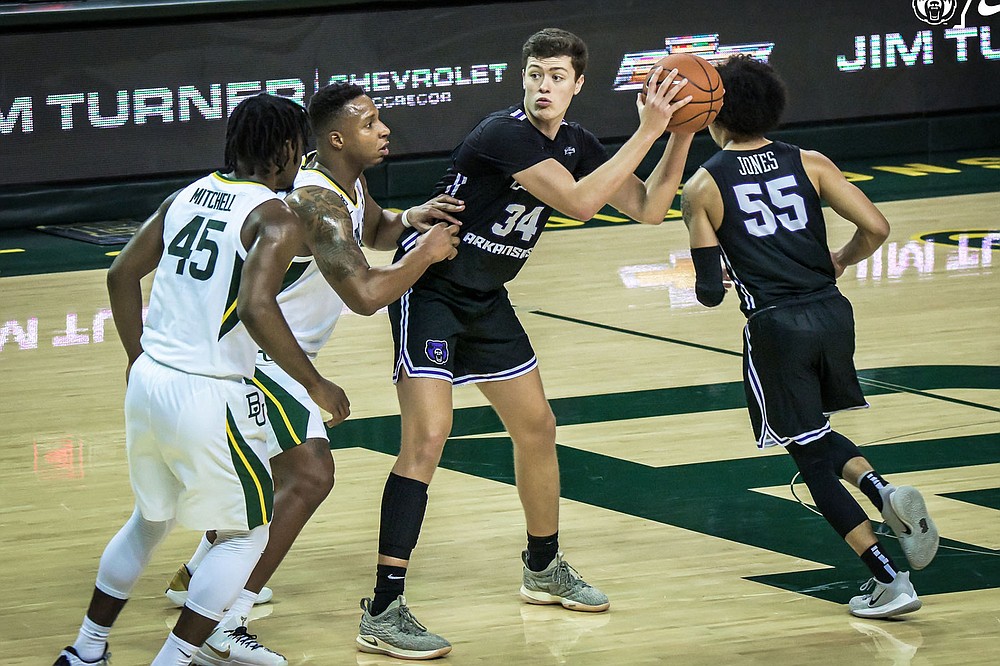 Central Arkansas forward Jaxson Baker (34) is one of the UCA athletes expected to sign an agreement with the Conway Convention and Visitors Bureau. “We’re all kind of excited for whatever options are down the road for us,” he said. (Photo courtesy of the University of Central Arkansas)