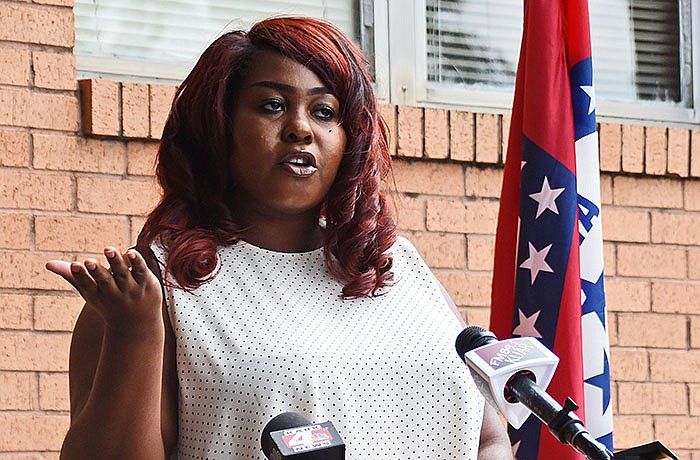 CaSandra Glover of Searcy, a single mother who recently earned a master’s degree in social work, talks about how the Child Tax Credit relief payments will help her and her son during a news conference Thursday at the Democratic Party of Arkansas headquarters in Little Rock. (Arkansas Democrat-Gazette/Staci Vandagriff)

Ninety-three percent of Arkansas children are eligible to be beneficiaries of an expanded child tax credit that went into effect Thursday.

As a provision of the American Rescue Plan Act that Congress passed in March, monthly payments of $250 or $300 per child, depending on their age, began hitting parents' bank accounts Thursday. According to the Center on Budget and Policy Priorities, 661,000 children in Arkansas are eligible for the advance tax credit.

Qualifying households are eligible to receive $3,600 for each child under 6 years old, and $3,000 for each child between 6 and 17 years old, in monthly payments made on or near the 15th of each month from July through December. Families will receive the second half of the credit when they file their tax returns in 2022.

Among the Arkansas parents receiving the credit is Searcy resident CaSandra Glover. A single mother who recently earned a master's degree in social work, Glover said the payments will allow her to sign her 3-year-old son, Derrick, up for recreational activities throughout the year and to start building savings. She said she benefited from government assistance programs, including the Supplemental Nutrition Assistance Program and Medicaid while in graduate school.

"I was able to lift myself economically out of a status, but this money's still going to help, because even for individuals who are middle class, it's not like times don't get hard, you know?" Glover said. "Coming from basically being in poverty, I don't have a whole bunch of savings, so the ability to even save for if a rainy day happens or if I have some large bill."

Bruno Showers, a senior policy analyst at Arkansas Advocates for Children and Families, said the payments are especially timely for Arkansans who may be behind on rent -- with the federal moratorium on evictions ending July 31 -- struggling with hunger, or trying to get back to work after Republican Gov. Asa Hutchinson ended the state's participation in the $300 weekly federal unemployment assistance supplement last month.

"It's a direct lifeline for a lot of people that are still struggling," he said.

Twenty-two percent of children in Arkansas were living in poverty as of 2019, according to a June report from the Annie E. Casey Foundation.

The Center on Budget and Policy Priorities estimates that a permanent expansion of the tax credit would reduce child poverty in the state by 48%. President Joe Biden has said the payments are a key to halving child poverty rates nationally and called the credit "transformative" in a tweet Thursday.

"It's going to spur the largest-ever one-year decrease in child poverty in American history," Biden said.

Nationally, about 15 million households are to receive the full credit, and the monthly payments will average $423 per family.

Michael John Gray, the chairman of the state Democratic Party, praised Biden's administration and Democratic leaders in Congress with passing the American Rescue Plan Act. The vote was almost nearly along party lines; no member of Arkansas' congressional delegation, which is Republican, voted in support of the $1.9 trillion coronavirus relief package. Their spokespeople didn't return requests for comment by Thursday evening.

"This is an opportunity to lift children out of poverty like we've never seen," Gray said at a news conference Thursday. "Why people in Washington would be against this? They were against it strictly on the partisan labels."

"Big government and fiscal irresponsibility are never the answer to our nation's economic issues. Inflation is at a 13-year high and still climbing, which is a hidden tax on hardworking Arkansans," Jordon said.

The Internal Revenue Service said Thursday that payments adding up to about $15 billion reached about 35 million families in total, and about 86% were sent by direct deposit.

If the household filed tax returns in 2021 or 2020 or previously received stimulus payments from the federal government, they will receive the payment automatically.

Others seeking to access the credit can visit the IRS portal at irs.gov/childtaxcredit2021 and sign up to receive payments starting in August.

Gray recommended that people who need help getting the payments reach out to Legal Aid of Arkansas, a nonprofit that provides certain legal services for free to low-income individuals.