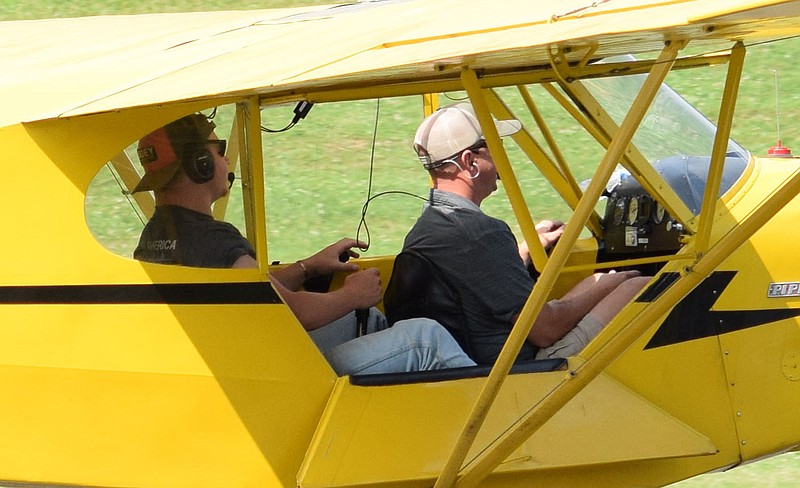 Westside Eagle Observer/MIKE ECKELS This vintage 1946 Piper J-3 Cub, which used runway 13/31 at Crystal Lake Airport for landing and take-off practice, seats two occupants in tandem with the instructor in front and the student in back. Nearly 3,000 cadets received their introductory instruction including solos in the Cub during the Civilian Pilot Training Program at Drake Field in Fayetteville from 1939-1944.

DECATUR -- One of the most iconic aircraft from the 1930s and '40s was one bear of a bird to fly. More pilots before and during World War II received their initial training, including solo flights, in this aircraft than any other type of aircraft in history. One such plane was at Crystal Lake Airport on June 8 for a 90-minute training session.

Piper J-3 Cub 4326N (November), belonging to Summit Aviation out of Thaden Field in Bentonville, is a frequent visitor to Crystal Lake Airport. It is not uncommon to see the familiar Cub Yellow aircraft using the runways for pilot training four times or more a week, depending on the weather.

With the instructor in the front and the student in the back, the aircraft was flying around the skies of Decatur for about 75 minutes. During that time, the instructor put his student through several basic flying maneuvers. With the wind calm at the time, the trainer could utilize both runways 13 and 31 to his advantage.

After landing on 13, which is the northwest to southeast configuration, the aircraft stopped for a moment while the instructor set up his next training exercise. Then the student pushed the stick forward, and the plane quickly began its roll down the runway.

The Piper J-3 Cub was designed and built by C.G. Taylor (founder of the Taylor Aircraft Company) and Walter Jamouneau in Bradford, Pa. Its first flight was in 1938, and from that point history was made. William T. Piper, the founder of Piper Aircraft, one of the big three small aircraft manufacturers (Beechcraft and Cessna the other two), took control of the production of the J-3 which ran from 1938-1947. In all, 19,888 J-3's, 150 Canadian versions and 253 TG-8 gliders were produced in the Lock Haven, Pa., factory which was the new production facility after the Bradford plant was destroyed by fire.

In 1940, the L-4 Grasshopper went to war as a light observation aircraft. It could fly low and slow, sometimes saving it from being shot down but not always. These aircraft were painted in the Army Air Corps' traditional olive drab scheme. The L-4 was also one of the key components in the D-Day invasion and Battle of the Bulge engagements towards the end of World War II.

Many Grasshoppers bore three white stripes on the wing, known as invasion stripes. Allied aircraft used these stripes to tell ground forces that they were "friendlies." Several examples of these aircraft grace aviation and military museums around the globe.

One of the main reasons the Piper Cub was used extensively for training was its short field takeoff abilities. Depending on who was at the controls, the Cub could be airborne in as little as 300 feet. Some airshow pilots can get the Cub in the air in half that distance.

After takeoff, the plane quickly gained altitude, around 1,000 feet by the end of the runway, and the instructor had his student do a duster turn, a turnaround that consists of a steep bank. This allows the aircraft to quickly turn in a short space, getting the nose lined back up with runway 31 this time. As quickly as the pair and their plane were up in the air, they were back to mother Earth once again.

A short rollout and the four-cylinder Continental power plant was at full power and the plane was airborne again. This time, and for the remainder of the instruction time, the instructor had his student fly around 15 feet over the runway until the aircraft was near the number (runway marker) and then the student pulled back on the stick and began his climb. This exercise teaches the student to maintain a steady altitude.

Toward the end of his time at Crystal Lake, the instructor had his student perform a series of one-wheel landings. This teaches the student to handle any kind of landing, especially in crosswind situations. As the plan made its final pass down runway 31, the pilot and student waved at the few spectators who stopped to watch this little piece of history take to the air and soon disappear over the hills of Northwest Arkansas on its way back to Bentonville.

There are still a number of the original Piper Cub J-3s in service today. Aside from being used to train pilots, they are also popular sport aircraft, and some are used as spotter aircraft for the forest service and Civil Air Patrol. Two companies, American Legend in Texas and Cub Crafter in Washington State, still produce a modern version of the J-3.

So, the next time you see a small yellow aircraft flying around the northern end of Decatur, chances are it is a Piper J-3 Cub. Take a short drive to Crystal Lake Airport and watch this iconic bird of the past as it is put through its paces.