Findings of AP inquiry seen as undercutting Trump’s claims by BOB CHRISTIE AND CHRISTINA A. CASSIDY THE ASSOCIATED PRESS | July 17, 2021 at 4:19 a.m. 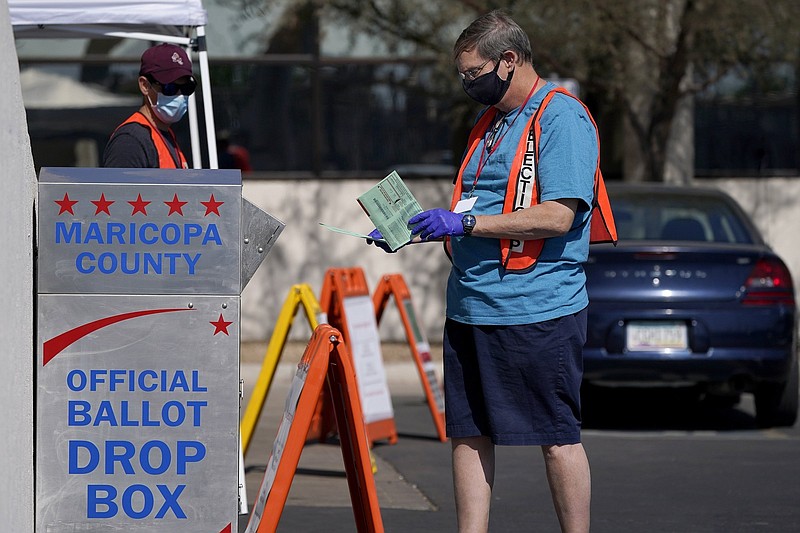 PHOENIX -- Arizona county election officials have identified fewer than 200 cases of potential voter fraud out of more than 3 million ballots cast in last year's presidential election, undercutting former President Donald Trump's claims of a stolen election as his allies continue a disputed ballot review in the state's most populous county.

An Associated Press investigation found 182 cases where problems were clear enough that officials referred them to investigators for further review. So far, only four cases have led to charges, including those identified in a separate state investigation. No one has been convicted. No person's vote was counted twice.

While it's possible more cases could emerge, the numbers illustrate the implausibility of Trump's claims that fraud and irregularities in Arizona cost him the state's electorate votes. In final, certified and audited results, Biden won 10,400 more votes than Trump out of 3.4 million cast.

AP's findings align with previous studies showing voter fraud is rare. Numerous safeguards are built into the system to not only prevent fraud from happening, but to detect it when it does.

"The fact of the matter is that election officials across the state are highly invested in helping to ensure the integrity of our elections and the public's confidence in them," said Arizona Secretary of State Katie Hobbs, a Democrat. "And part of that entails taking potential voter fraud seriously."

AP's review supports statements made by many state and local elections officials -- and even some Republican county officials and GOP Gov. Doug Ducey -- that Arizona's presidential election was secure and its results valid.

Still, Arizona's GOP-led Senate has for months been conducting what it describes as a "forensic audit" of results in Phoenix's Maricopa County. The effort has been discredited by election experts and faced bipartisan criticism, but some Republicans, including Trump, have suggested it will uncover evidence of widespread fraud.

"This is not a massive issue," said Adrian Fontes, a Democrat who oversaw the Maricopa County election office during the 2020 election and lost his reelection bid. "It is a lie that has developed over time. It's been fed by conspiracy theorists."

The AP tallied the potential cases after submitting public record requests to all Arizona counties. Most counties -- 11 out of 15 -- reported they had forwarded no potential cases to local prosecutors. The majority of cases identified so far involve people casting a ballot for a relative who had died or people who tried to cast two ballots.

In addition to the AP's review of county election offices, an Election Integrity Unit of the state attorney general's office that was created in 2019 to ferret out fraud has been reviewing potential cases of fraud.

A spokesman for Attorney General Mark Brnovich told the AP in April that the unit had 21 active investigations, although he did not specify if all were from last fall.

A month later, the office indicted a woman for casting a ballot on behalf of her dead mother in November. A spokeswoman declined to provide updated information this week.

Maricopa County, which is subject to the disputed ballot review ordered by state Senate Republicans, has identified just one case of potential fraud out of 2.1 million ballots cast. That was a voter who might have cast a ballot in another state. The case was sent to the county attorney's office, which forwarded it to the state attorney general.

Virtually all the cases identified by county election officials are in Pima County, home to Tucson, and involved voters who attempted to cast two ballots.

The Pima County Recorder's Office has a practice of referring all cases with even a hint of potential fraud to prosecutors for review, something the state's 14 other county recorders do not do. Pima County officials forwarded 151 cases to prosecutors. They did not refer 25 others from voters older than 70 because there was a greater chance those errors -- typically attempts to vote twice -- were the result of memory lapses or confusion, not criminal intent, an election official said.

None of the 176 duplicate ballots was counted twice. A spokesman for the Pima County Attorney's Office, Joe Watson, said Wednesday that the 151 cases it received were still being reviewed and that no charges had been filed.