Gone but not forgotten

LOS ANGELES -- They were teachers, scholars, mentors, ministers to the troubled.

They devoted their lives to God and helping others. After they grew old, they came to a secluded campus in the hills of the Santa Clara Valley to spend the rest of their days in quiet contemplation.

One by one, the retired priests succumbed to covid-19.

In the span of a month, beginning in early December, eight residents of Sacred Heart Jesuit Center in Los Gatos died.

As each man grew sicker, fellow residents entered the infirmary one at a time, anointed him with oils and said a prayer.

"When that phone rang, it was haunting," Peterson said. "You didn't know who was next. Sometimes the deaths were so quick you didn't have a chance to say goodbye, and others lingered in pain."

Sacred Heart was home to more than 80 retired priests and brothers, some able-bodied, and others who required frequent medical care. As in other facilities, elderly people living in close quarters provided fertile ground for the coronavirus.

DID EVERYTHING THEY COULD

Father Scott Santarosa, head of Jesuits West Province, said officials did everything they could to prevent a coronavirus outbreak.

Residents masked early in the pandemic. They stopped congregating in the chapel and hallways. Eventually, Mass was livestreamed so they could worship from their rooms. Visitors were barred.

"The sacrifice, the belief in God and their mission helped these men through this difficult time," Santarosa said, "but the loss of these great men is difficult to measure."

The 175-acre Sacred Heart campus overlooks rolling hills and is bordered by a winery built by the Jesuits in 1888. Once a training ground for new priests, Sacred Heart is the only retirement home for Jesuits in the Western states.

They gathered excitedly around the television when Gonzaga's men's basketball team, a perennial powerhouse, competed in the NCAA tournament.

The eight men who died of covid-19 joined the priesthood in its heyday, before its ranks

Seven priests on "safety plans," designed to keep them from sexually abusing anyone else, reside at Sacred Heart. None of the eight who died has been accused of abuse.

Abuse of vulnerable people has occurred at Sacred Heart itself. In the late 1990s, a priest in a wheelchair who was struggling with mental illness accused a brother of groping him. In the early 2000s, that same brother and an elderly priest were convicted of molesting mentally disabled men who lived and worked at Sacred Heart.

But for the most part, Sacred Heart has been a tranquil retreat.

In November, as the pandemic worsened in California, the coronavirus found its way there. Peterson, the archivist, tested positive, along with four retirees.

A full lockdown ensued. The chapel, dining room, gym and library were closed. The retired clergy ate alone in their rooms. Instead of exchanging greetings in hallways, they caught up by email and phone.

While training to be a priest in 1958, Bush began visiting the federal prison on Alcatraz Island, assisting in Masses and offering a sympathetic ear to prisoners and staff alike.

Trumblay was released in time to attend Bush's ordination in San Francisco in 1965, presenting the new priest with a ceremonial white robe he had made.

When Bush celebrated his first Mass, he wore the garment, and Trumblay was in the congregation, according to the San Francisco Chronicle.

A Southern California native, Fice taught religious education at Catholic high schools for more than two decades and led retreats, including sessions focused on grief for people who had recently lost loved ones. In retirement, he was Sacred Heart's handyman, caring for antique clocks and the patio garden, Peterson wrote in an online obituary.

"Fascinated by word origins, he could be counted on to research and report on whatever arcane subject came up at the table," Peterson wrote.

A few days later, on Dec. 16, the virus took Silvano Votto, 78, a teacher and scholar of classical languages who was born in Italy.

At Sacred Heart, Votto gave lectures on Scripture, with the Greek text as his sole reference, Peterson wrote.

The day after Votto, Michael Cook, a longtime professor at Gonzaga University who wrote three books on theology, died at 84.

The Montana native, who spoke seven languages, used personal, informal language when discussing God -- whom he referred to as "abba," or "father" in Aramaic, recalled his niece, Colleen Cook.

ONE AFTER THE OTHER

He was born in a taxi in Houston in 1940 as his mother rushed to one of the few hospitals that admitted Black patients.

Black students were not allowed in Houston Catholic schools, so McGowan's family moved to Seattle. There, he was ordained as the archdiocese's first Black priest in 1974, according to a church spokesperson, and later served as head of the University of Seattle's Office of Minority Affairs.

His booming voice and sense of outrage over racial injustice inspired students and instilled confidence in them, said former student Glenn Nelson.

"Father would just let us go, and that was the first time many of us ever called out white people," said Nelson, 63, whose mother was Japanese. "It was empowering."

In 2019, McGowan moved to Sacred Heart as he battled cancer. He contracted covid-19 and died Dec. 23.

Then came Chuck Peterson, who ministered to Indigenous villages along the coast of the Bering Sea and the banks of the Yukon and Kuskokwim rivers, accessible mainly by bush plane and snowmobile.

He had dreamed of preaching in Alaska since he was a child in Montana, said Susan Murphy, a friend and longtime parish administrator of Immaculate Conception Church in Bethel. Shortly after arriving in Bethel in 1963, Peterson created a deacon training program for Yup'ik people so that villagers could, after years of instruction, perform Communion services, baptisms, weddings and funerals.

"What made Father Chuck special is he made the teachings so easy to understand," said Joe Asuluk, 72, who is Yup'ik and has been a deacon since 1989. "If we could understand the Scripture, then we could explain it to our communities."

In 2004, Peterson was working in Washington state when a decadeslong sexual abuse scandal surfaced in Alaska. Ultimately, more than 300 allegations involving 45 clergy and volunteers in the Archdiocese of Fairbanks were deemed credible by the church. Most of the sexual abuse survivors were native Alaskan children.

Peterson engineered a transfer back to Alaska to try to repair the damage.

According to Murphy, some former Bethel priests were on the list of the accused. Disillusioned, about half the congregation left the church. Peterson won over some people by admitting that church officials were at fault and emphasizing that the survivors did nothing wrong, Murphy said.

After experiencing a hemorrhage and cranial bleeding, Peterson moved to Sacred Heart for rehabilitation in 2017. He visited Bethel twice and hoped to return permanently, Murphy said.

Gordon, a native of Spokane, Wash., taught at Gonzaga and Xavier University in Cincinnati before working as a hospital chaplain for nearly three decades, according to Peterson, the archivist. He then ministered at Gonzaga before retiring to Sacred Heart in 2015.

"It was heartbreaking to get the news," Santarosa said. "For this pernicious virus to attack the heart and soul of this province was very difficult."

Over the course of the outbreak, 15 Sacred Heart residents were hospitalized with covid-19 and survived.

Santa Clara County officials arrived with the Moderna vaccine early this year, with staff and retired priests receiving their second doses on Feb. 17 -- Ash Wednesday, the beginning of the Lenten season of fasting and contemplation.

"There was a little bit of celebrating going on that day," Peterson said. "There was a lot of relief that hope arrived in our hour of need."

Since then, retired priests confined to their rooms for months have enjoyed socially distanced Masses and dining together in small groups. On Cinco de Mayo, the festivities included tacos and mariachis.

Tom Splain lived next to Bush, the Alcatraz priest, at Sacred Heart. The two had been friends for more than 50 years.

"The idea is to honor the men who died by getting back to our lives," Splain said.

Information for this article was contributed by Richard Winton and Marisa Gerber of the Los Angeles Times. 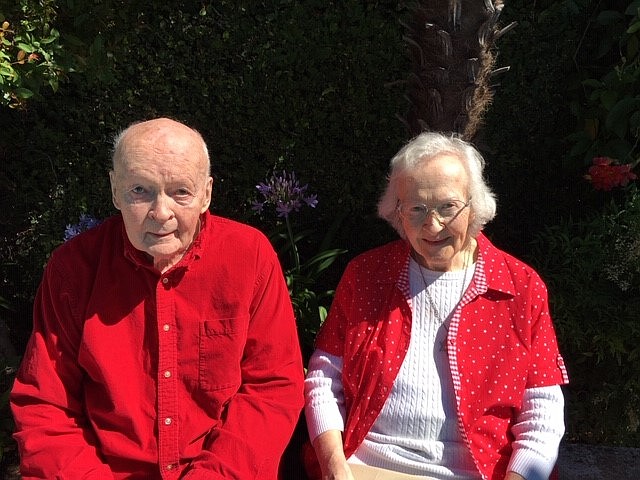 In early January 2021, Gerald Gordon, left, succumbed to COVID at age 95. Gordon, a native of Spokane, taught at Gonzaga and Xavier University in Cincinnati before working as a hospital chaplain for nearly three decades. (Sacred Heart Jesuit Center/TNS) 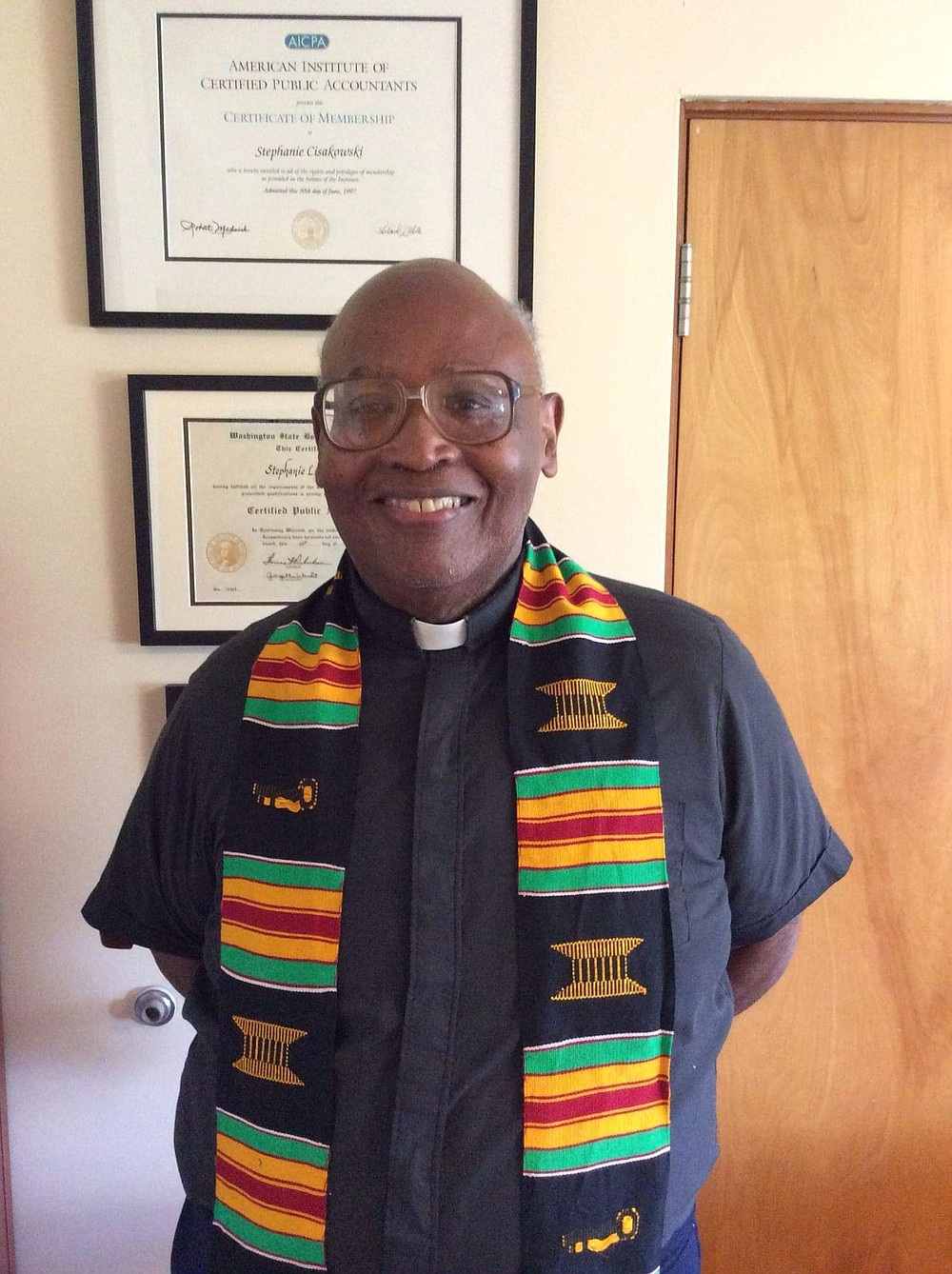 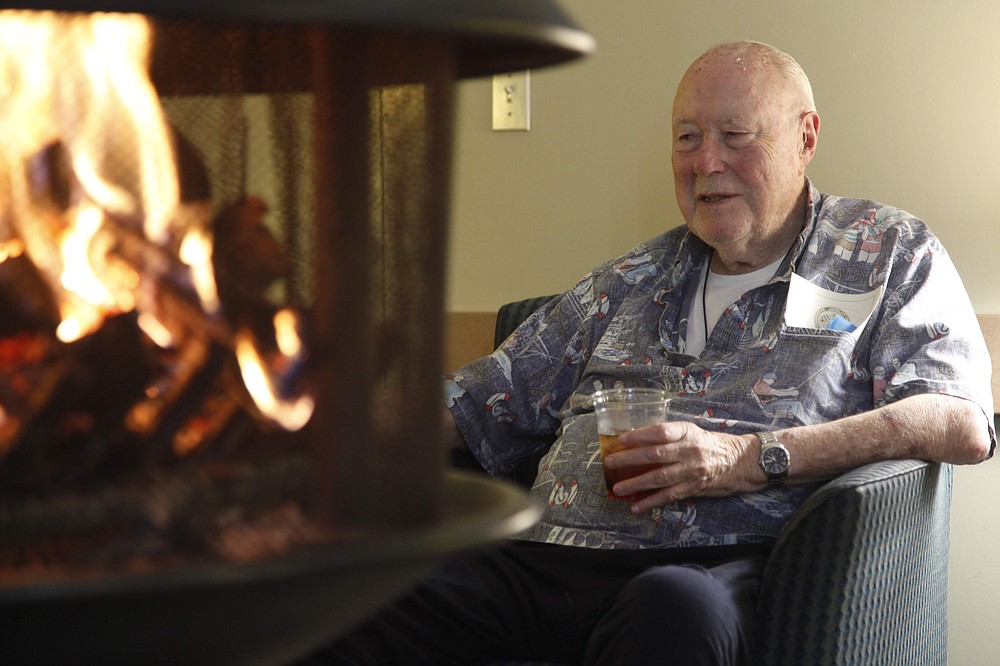 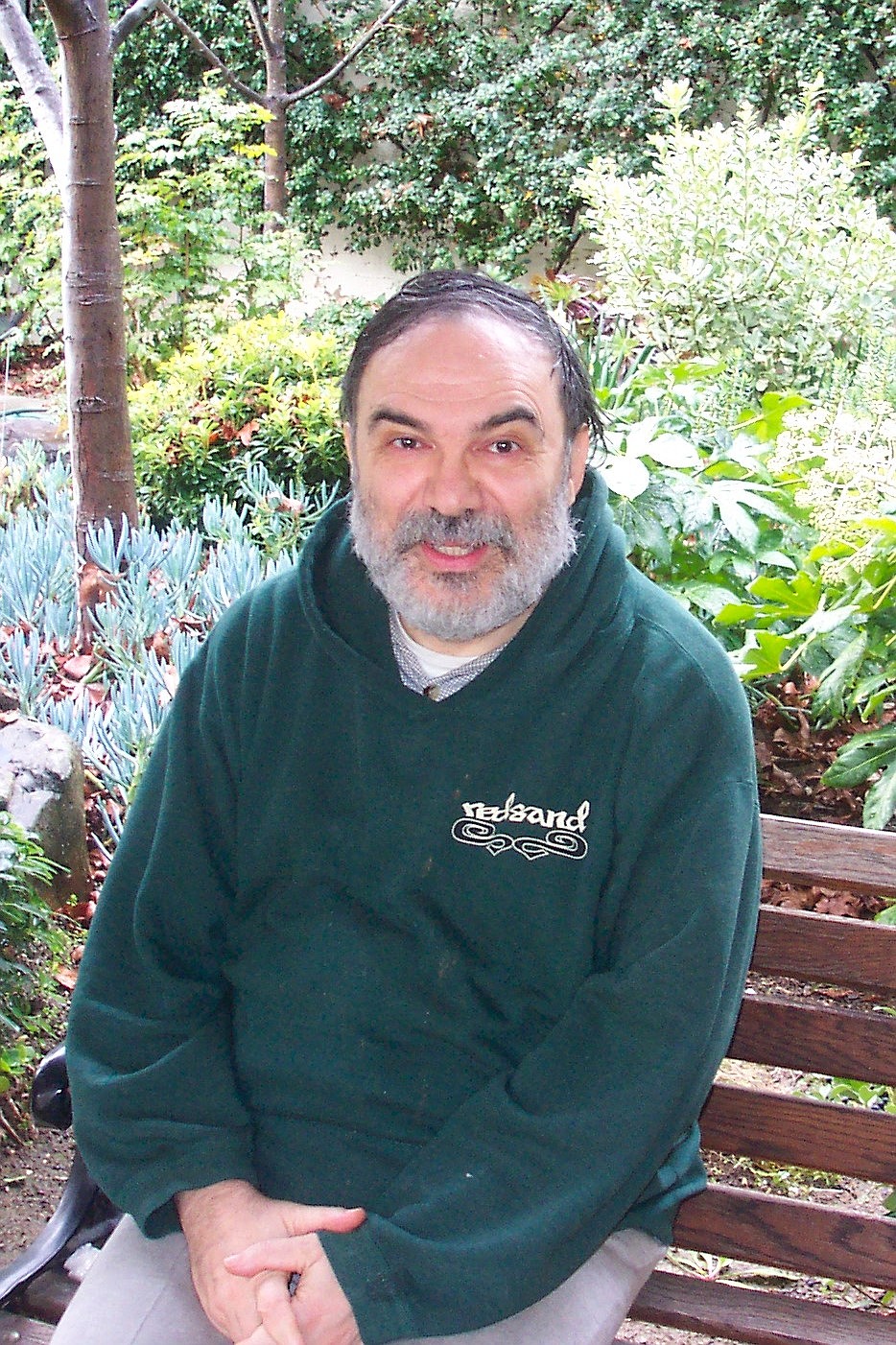 Silvano Votto died on December 16 at age 78. Votto was a teacher and scholar of classical languages who was born in Italy. (Sacred Heart Jesuit Center/TNS) 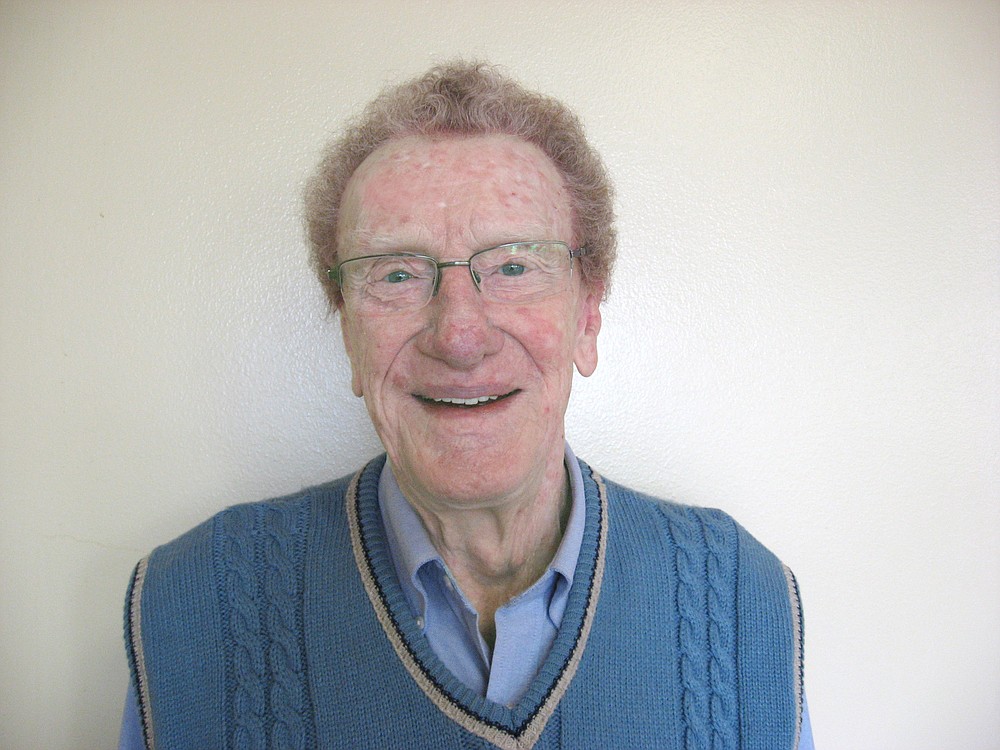 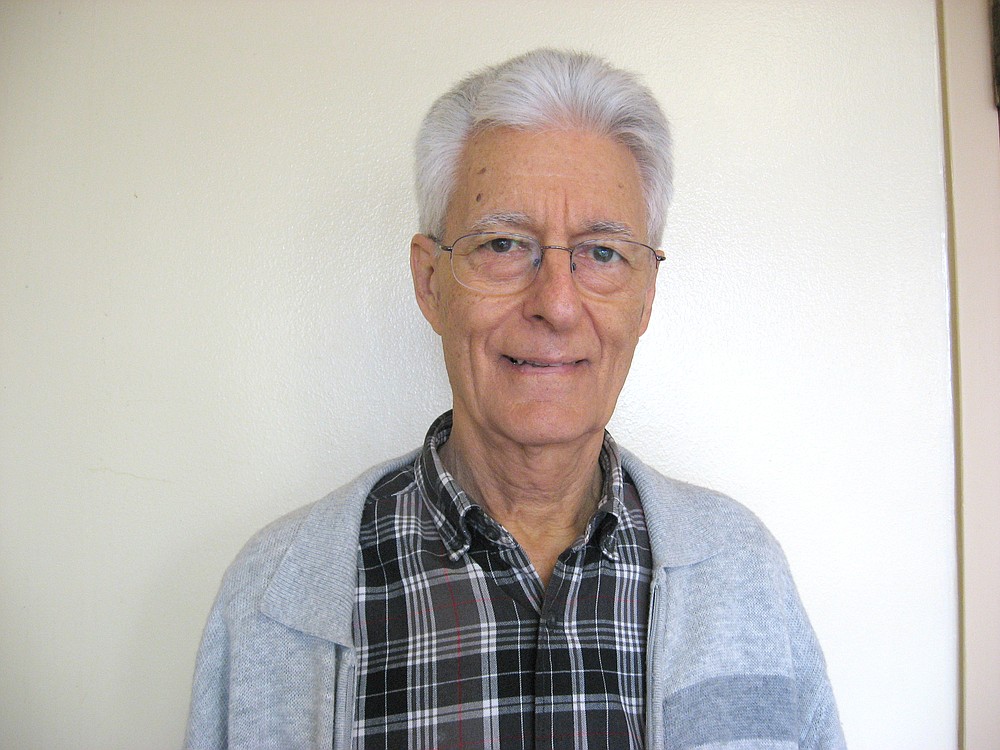 Joseph Fice died on December 13, 2020 at age 82. He taught religious education at Catholic high schools and led retreats, including sessions focused on grief for people who had recently lost loved ones. (Sacred Heart Jesuit Center/TNS) 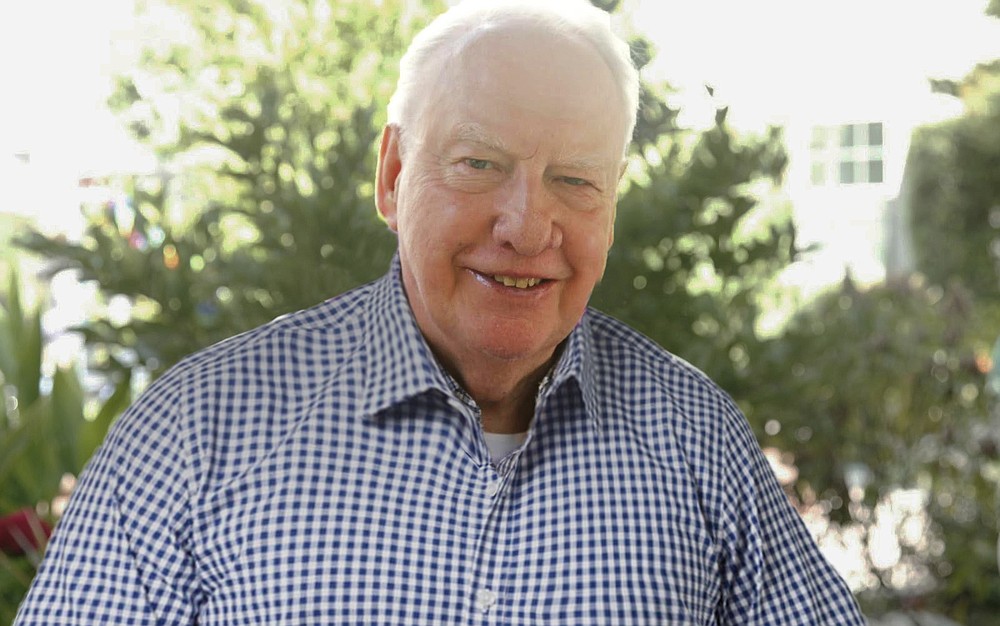 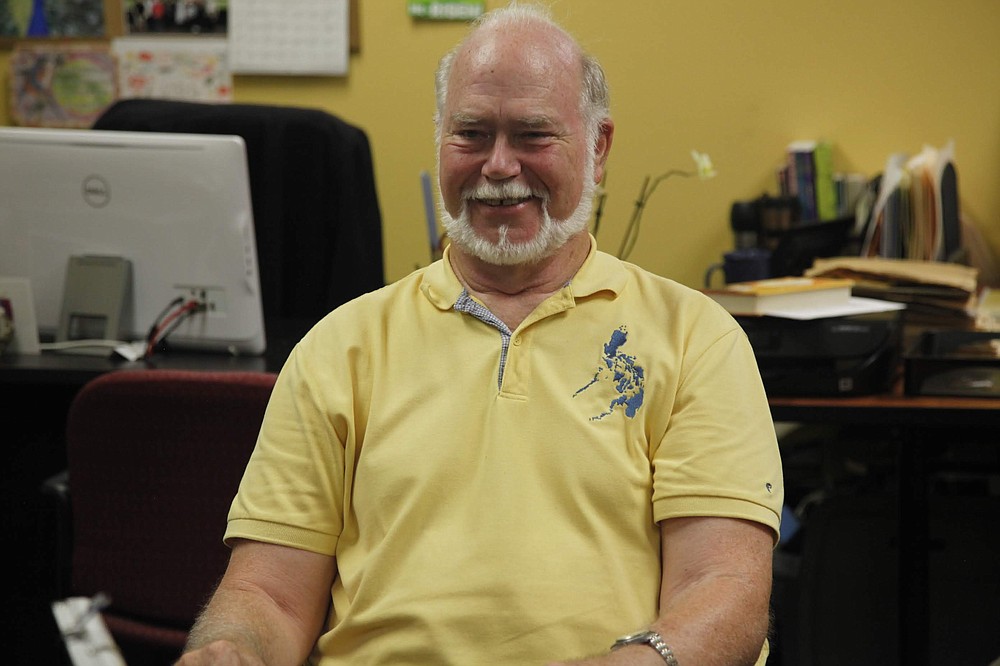 Chuck Peterson died on Christmas Eve 2020 at age 82. Peterson ministered to indigenous villages along the coast of the Bering Sea and the banks of the Yukon and Kuskokwim rivers. (Sacred Heart Jesuit Center/TNS)

Print Headline: Gone but not forgotten