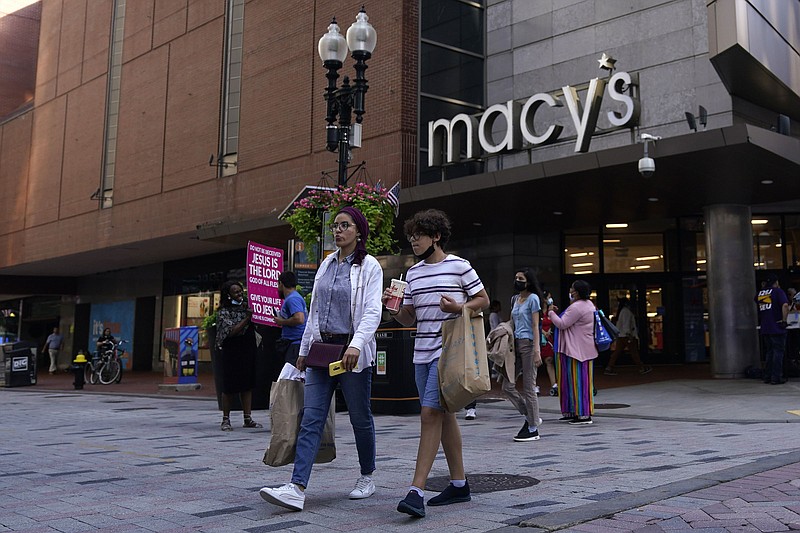 Retail sales rose in June, the Commerce Department reported Friday, an unexpected jump that came as American consumers increased spending on dining out, clothes and gadgets.

The value of overall retail purchases advanced 0.6% last month after a downwardly revised 1.7% drop in May. Excluding autos, sales jumped 1.3% in June. The increase was a surprise to Wall Street analysts, who had expected sales to fall slightly last month.

Spending has slowed since March, when stimulus checks sent to most Americans caused a surge in shopping. And as Americans get vaccinated, they are spending less on goods and more on hotels, haircuts and other services, which are not reflected in Friday's report.

"This report only captures a small sliver on consumer spending, on restaurants and bars, but it misses all the travel," she said.

[Video not showing up above? Click here to watch » https://www.youtube.com/watch?v=CAIzMCtA2rw]

Americans are paying more for food, gas and other goods. Prices jumped last month by the most in 13 years, the Labor Department said earlier this week. A survey by the Federal Reserve Bank of New York also found that consumers expect higher inflation in the near term and over the course of several years.

"You're starting to see a pickup in inflation expectations that might make consumers more cautious in terms of opening up their pocketbooks when they're spending," Beth Ann Bovino, U.S. chief economist at S&P Global Ratings Services, said before Friday's release.

Sales at non-store retailers, which include e-commerce, advanced 1.2% in June.

At car dealerships, sales fell 2%. Automakers aren't making as many vehicles, meaning there are fewer cars to buy, because of a worldwide shortage of chips, which are needed to power in-car screens and other technology.

The biggest drop in sales was at furniture stores, where purchases fell 3.6% in June. Sales also fell at home improvement stores and places that sell sporting goods.

As the back-to-school season approaches, Bovino expects more parents, who might have relied on unemployment benefits and tended to their children while they pivoted to remote learning, to rejoin the workforce. That could help companies increase output and ease some of the shortages of supplies and products.

"I suspect we are going to see some of the supply constraints that businesses are facing right now ease come September," she said.

Spending could also be affected by states withdrawing early from federal unemployment insurance programs, cutting off the $300 a week in aid that was added to benefits last year. Twenty-four states stopped paying the extended benefits, with most cutting off the aid in June, and an analysis by Bank of America based on credit and debit card spending showed that spending in states that ended the benefits saw a decline in consumer spending last week.

The states that withdrew the benefits have argued that the aid was discouraging people from seeking work at a time when some businesses were trying to staff up as the economy reopens. Many economists say that discontinuing benefits may end up hurting personal incomes more than they help address the worker shortage.

Bovino expects the child tax credit, which will provide all but the most affluent families up to $300 a month per child as part of the pandemic relief package, an extra lift to consumer spending. The size of the credit depends on a family's income, the number of children and their ages.

"This could help give a cushion to those people who are unemployed as they find a job," Bovino said.

Information for this article was contributed by Joseph Pisani of The Associated Press, by Coral Murphy Marcos of The New York Times and by Olivia Rockeman of Bloomberg News (WPNS).