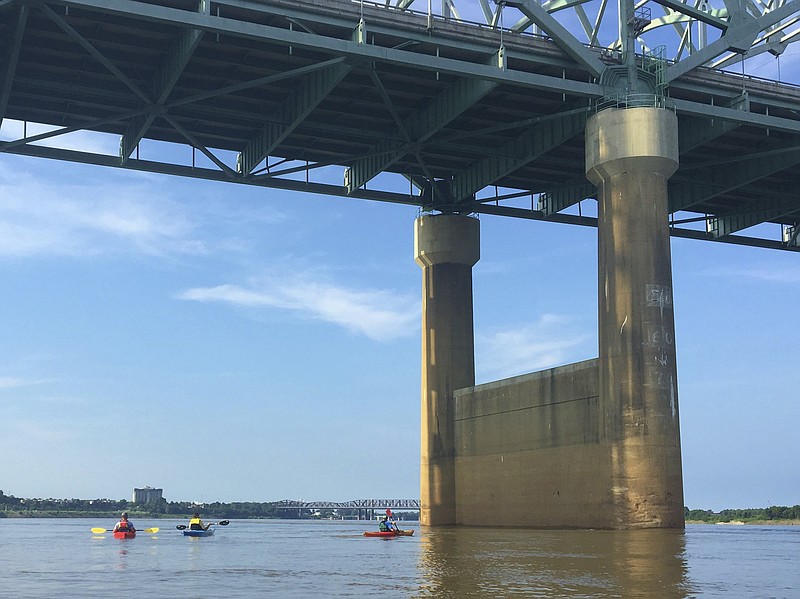 In this 2016 photo provided by Barry W. Moore, the Interstate 40 bridge is seen from the Mississippi River, between Arkansas and Tennessee. A cracked steel beam, seen above, prompted the indefinite closure of the bridge. (Barry W. Moore via AP)

The latest delivery of steel plates -- a total of six -- to repair the closed Interstate 40 bridge over the Mississippi River between West Memphis and Memphis arrived at the site Thursday from one of the two Arkansas steel fabrication plants operated by W&W/AFCO Steel in Little Rock.

Another 11 plates are scheduled to be delivered next week, also from W&W/AFCO Steel, according to Amy Rogers, the company's vice president for bridge sales.

In all, the company will provide 100 tons of steel for the Phase 2 and Phase 3 repairs on the bridge, also known as the Hernando de Soto Bridge. It has been closed since May 11 when inspectors discovered a fracture that affected the structural integrity of the bridge.

A hundred tons is a tiny amount for the privately held W&W/AFCO, the largest bridge steel fabricator in the United States. By comparison, the company will provide 22,940 tons of fabricated steel for 30 Crossing, the $1 billion project to improve a 6.7-mile section of Interstate 30 in downtown Little Rock and North Little Rock. That project includes replacing the I-30 bridge over the Arkansas River.

In fact, the steel used to repair the Memphis bridge was steel W&W/AFCO had ordered for the 30 Crossing, Rogers said.

Company officials were offering their insight almost from the beginning, speaking with officials from Arkansas and Tennessee, and with the governor's office, she said.

"We were saying, 'hey, nobody panic. Here's the solution,'" Rogers said. "'The state of Arkansas owns the plates. We have it on the ground. It's Grade 70. It's what needs to go.' We have a lot of very experienced engineers on staff that said, 'here's what needs to happen to get the bridge open quickly and safely.'"

Helping repair the I-40 bridge was personal for W&W/AFCO employees. Just 140 miles from Little Rock, the bridge is practically in their backyard. They and their relatives and friends regularly use the crossing, be it to visit Memphis or on their way to the beach or other points east.

"We fabricate bridges from Maine, New York, Florida, Colorado, all over the country," Rogers said. "But this project, you know, is home.

"I hand-delivered a drill out there when [the contractor] first started before we had a contract out of our shop in Van Buren on a Sunday night because it felt like our crisis, our problem, as an Arkansas company."

The company has used both of its Arkansas operations to fabricate the steel.

They include W&W/AFCO's operations in Little Rock, which feature two facilities totaling 609,000 square feet of shop space under a roof on a 50-acre site off East Sixth Street. They are equipped with what the company says is "a full range" of computer numerical control routers, advanced machines that automatically cut steel.

The other Arkansas operation is in Van Buren, where a 30-acre site has 282,000 square feet of shop space under a roof.

Both operations are near major interstates, Union Pacific and have access to barge shipments on the Arkansas River. Together, they employ 200 people.

In Little Rock, the company was known as AFCO for its first 93 years. Founded in 1909, the company can safely boast fabricating the steel for what is much of modern Little Rock: The Regions Bank building, Simmons Bank Arena, the Simmons Bank Tower, the Stephens Building, the Clinton Center ... "all the major high-rises ... except old Worthen Bank, which is concrete," Rogers said.

The company was owned by four generations of the Fred Brown family until it was sold in 2002 to another family-owned fabrication company, W&W of Oklahoma City.

The company has participated in major construction projects across the country, including the home of the Dallas Cowboys, AT&T Stadium; Globe Life Park, home of the Texas Rangers; Tesla's truck factory in Austin and its battery factory in Sparks, Nev.; Amazon distribution centers in New York, Las Vegas, El Paso and Canada; and the 9/11 Memorial Building in New York City.

Rogers' division has 16 bridge steel fabrication facilities across the nation. In addition to the I-40 repair and 30 Crossing, bridge jobs have included another Mississippi River crossing -- the Stan Musial Veterans Memorial Bridge in St. Louis, which carries Interstate 70 traffic -- and the Christopher S. Bond Bridge in Kansas City, Mo.

The latest steel that AFCO is providing is for 16 locations on the I-40 bridge that need to be repaired before the bridge reopens. They are considered part of what is called Phase 3 repairs. The locations were identified after an ultrasonic inspection of 500 welds undertaken after the bridge was closed. None of the locations had cracks.

Closing the 48-year-old bridge has forced traffic to be rerouted to the Memphis and Arkansas Bridge, which is 3 miles to the south on Interstate 55.

The crack on the Hernando de Soto Bridge, a tied-arch span, was found on a steel beam that connected cords to the arch. When the beam cracked, the load that was once carried by the beam shifted to other parts of the bridge.

The way the bridge is designed means the Arkansas Department of Transportation classifies it as "fracture critical," meaning parts of the bridge are "subject to tension whose failure would probably cause a portion of or the entire bridge to collapse." Fracture critical bridges require frequent inspections but aren't inherently unsafe.

The Tennessee Transportation Department oversees repairs on the shared bridge, while the Arkansas department is responsible for bridge inspections. Kiewit Infrastructure Group was contracted for the repairs.

The crack was discovered May 11, but a photo from 2019, confirmed by transportation officials to be authentic, shows the crack has potentially been there for years. Another photo appears to show a crack as far back as 2016, but the authenticity of that image remains under investigation.