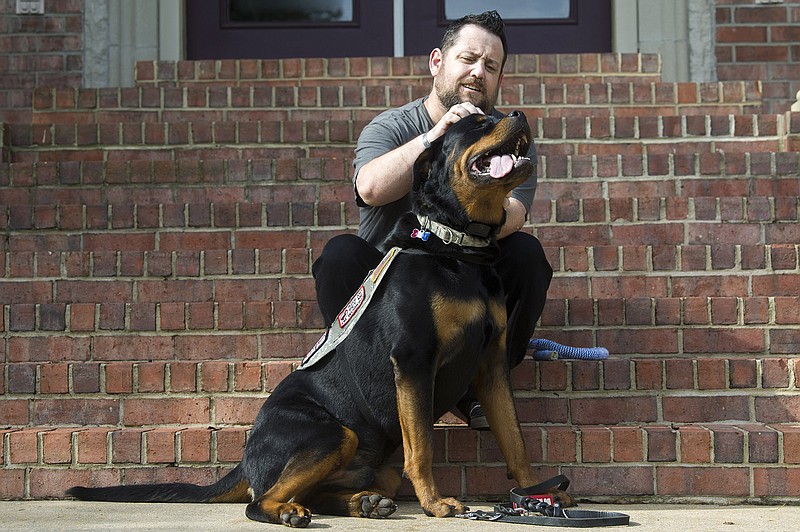 The federal jury unanimously concluded that the company must allow the Army veteran to bring the dog, Atlas, to work to help him deal with ongoing symptoms of post-traumatic stress disorder and a traumatic brain injury.

Hopman, 45, of Benton, said he was relieved after Judge Kristine Baker read the verdict.

"I'll finally get to work without being in pain and having flashbacks," he told the Arkansas Democrat-Gazette.

The jury also awarded Hopman $250,000 in compensatory damages but did not levy punitive damages against Union Pacific, the country's largest railroad. The ruling came after a five-day trial in U.S. District Court in Little Rock.

Hopman, a former flight medic, filed a disability discrimination lawsuit on Jan. 26, 2018, after Union Pacific officials refused his requests in 2015 and 2017 to allow his service dog to accompany him to work at the North Little Rock rail yard where he is an engineer on overnight runs to Van Buren in Crawford County.

He was diagnosed with PTSD in 2008 after an 18-month tour of duty in Iraq and is a survivor of a traumatic brain injury that occurred during a 2010 deployment to Kosovo.

Atlas, a 125-pound rottweiler, is a trained service dog who can sense Hopman's anxiety levels and "ground" him by sitting on his feet. The dog, who accompanied Hopman in the courtroom, can remind Hopman to take his medicine, keep crowds away, block anyone approaching from behind, notify Hopman when a migraine is coming, find the closest exit in a building, pick up and retrieve items, wake Hopman from nightmares and even force him out of the house when he is being too reclusive.

John Griffin, a Texas attorney who represented Hopman, tried a similar case in 2015 in San Antonio. The jury in that case found that Schlumberger Technology Corp. violated federal law by failing to reasonably accommodate an Iraq war veteran's PTSD by waiting six months to let the mechanic take his service dog to work and then restricting the dog's movements.

Griffin said Friday that the verdict in favor of Hopman "will open doors for veterans with war-induced disabilities."

"This will be a signal that employers should never treat anyone, much less a veteran, like the way Union Pacific treated Perry [Hopman]," Griffin said.

The defense attorneys representing Union Pacific declined to comment after the trial.

Hopman began working at Union Pacific's North Little Rock facility in May of 2008, after his PTSD diagnosis, but did not need any special accommodations on the job then, according to his lawsuit. He later medically retired from the National Guard after experiencing the brain injury, but he continued to work at the railroad as a conductor and now as an engineer.

Nearly a year later, he cited worsening struggles with PTSD, which is classified as a disability under federal law, and asked for permission to bring Atlas to work. Hopman acknowledged he could safely perform all functions of his job without Atlas at his side, but he said the dog's presence and special skills would allow him to be more comfortable physically and mentally on the job.

Union Pacific's primary reason for denying Hopman's request was because he could still do his job safely, said Torriano Garland, a Nebraska defense attorney representing Union Pacific, in his closing argument to the jury.

Griffin disputed this claim in his own closing argument and added that Atlas' presence on trains with Hopman would come at no cost to the railroad.

"They say, 'Look, he gets through the day somehow, he works through his migraines, he works through his flashbacks, he manages to go to work [and] has a high performance rating,'" Griffin said. "I think you'll see that this is a Catch-22 they're trying to get you to put him in, claiming that since he can work through these episodes and the physical and emotional pain they bring him, he should have to endure them, even when there is a no-cost solution to allow him to work better and safer."

A company must prove that a disability accommodation is an "undue burden" or violates a federal law in order to refuse a request. Garland attempted to make a case for this, claiming the dog's presence in the cabin of a moving locomotive could take up too much of a small space or be a distraction to other employees.

"Union Pacific understands why Mr. Hopman wants his companion, Atlas, at work, but Union Pacific is responsible... for providing its employees a reasonably safe place to work," Garland said.

Hopman said after the trial that Atlas has been trained "to go unnoticed" and should not cause problems for other employees. Atlas has never been on Union Pacific property in his five years with Hopman, who said being able to take the dog to work is "a dream come true."

"It was a just decision," Hopman said while scratching the dog's ears.

Information for this article was contributed by Dale Ellis and Linda Satter of the Arkansas Democrat-Gazette.