Broadway, New York on the cusp of rebound 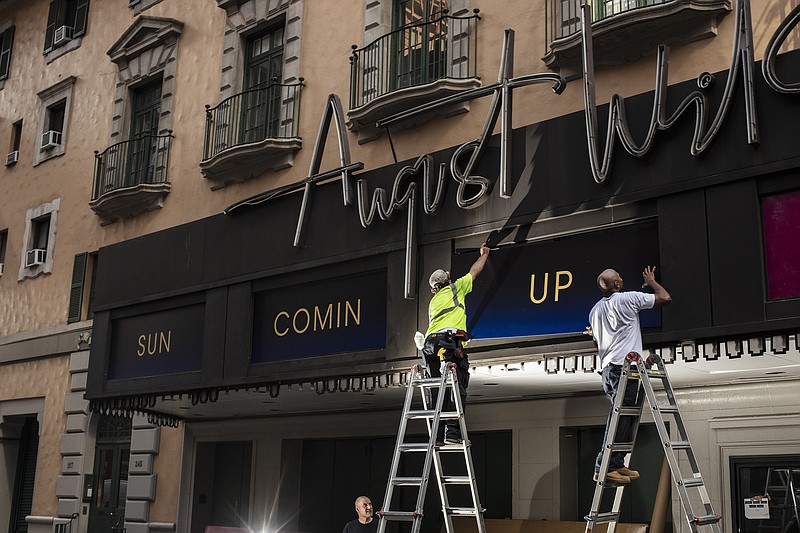 With Broadway reopening, the marquees are coming back to life, including at the August Wilson Theatre, where Antoinette Chinonye Nwandu’s “Pass Over” begins previews Aug. 4. (The Washington Post/Bryan Anselm)

NEW YORK — The pace has been stunning even to seen-it-all showbiz folk. Just two months ago, only one Broadway show had plans to open in the new 2021-22 season. Now there are 43.

The remarkable volume of new and returning Broadway productions, from entirely fresh entries such as "Thoughts of a Colored Man" to such established hits as "Dear Evan Hansen" to golden oldies including "Chicago," is a clear sign of how fast the New York entertainment world of every brow — high, middle and low — is scrambling to rise again. After "Springsteen on Broadway" led the pack on June 26, three more shows will begin performances before Labor Day, and then a deluge of reopenings commences shortly thereafter.

It is an article of faith that New York cannot robustly percolate without a Broadway in full swing; it supports 100,000 workers and pumps upward of $15 billion into the city's economy. But getting lost in the Gotham hoopla, which includes a massive "Homecoming Week" concert in Central Park on Aug. 21 — with Bruce Springsteen, Jennifer Hudson and Paul Simon among the headliners — is a fundamental concern: Who is going to fill all the seats? The answer is up in the air because tourism, vital to the city's revival, remains anemic, with the hotel occupancy in June under 60% ... a number so mediocre that, to drum up business, Mayor Bill de Blasio suspended the city's 5.9% room tax until the end of August.

Still, anticipation of a post-pandemic world runs so high that counting customers is taking a back seat to just getting open, a goal that went into overdrive after New York Gov. Andrew Cuomo announced the sudden lifting of all capacity restrictions on indoor events May 19.

"Things are changing so dramatically that what we were thinking two weeks ago is not what we're thinking now," said Charlotte St. Martin, president of the Broadway League, the trade group representing Broadway producers and theater owners.

The organization is part of an "It's Time for New York City" national TV ad campaign by the city's tourism marketing arm, NYC & Co., debuting this month. Pressure is building for the campaign to help: After an initial box-office boom, insiders say, ticket sales for many shows have leveled off, and Broadway producers need about 90% of all seats to be sold to make money. Confided one longtime producer, "I think what's going to happen is a lot of shows will open and there just won't be audience to fill them." Part of the problem is that international tourists, who make up about a third of the Broadway audience, are not expected back soon.

To pre-empt such a calamitous outcome, unorthodox come-ons are being trotted out. Many shows are instituting customer-friendly ticketing policies — virtually unheard of pre-pandemic in the 41 theaters of Times Square — allowing for tickets to be exchanged or refunded up to a couple of hours before showtime. And in another indication that radical measures may be required for survival, the Tony-winning, two-part "Harry Potter and the Cursed Child," facing what its producers called "commercial challenges," will reopen in the Lyric Theatre in November in just one condensed part.

This summer, productions gearing up for a return will be reassembling casts, repairing costumes and sprucing up sets; turntables and other stage mechanisms must be taken apart, reinspected and reinstalled. The crunch is such that rehearsal space is at a premium. 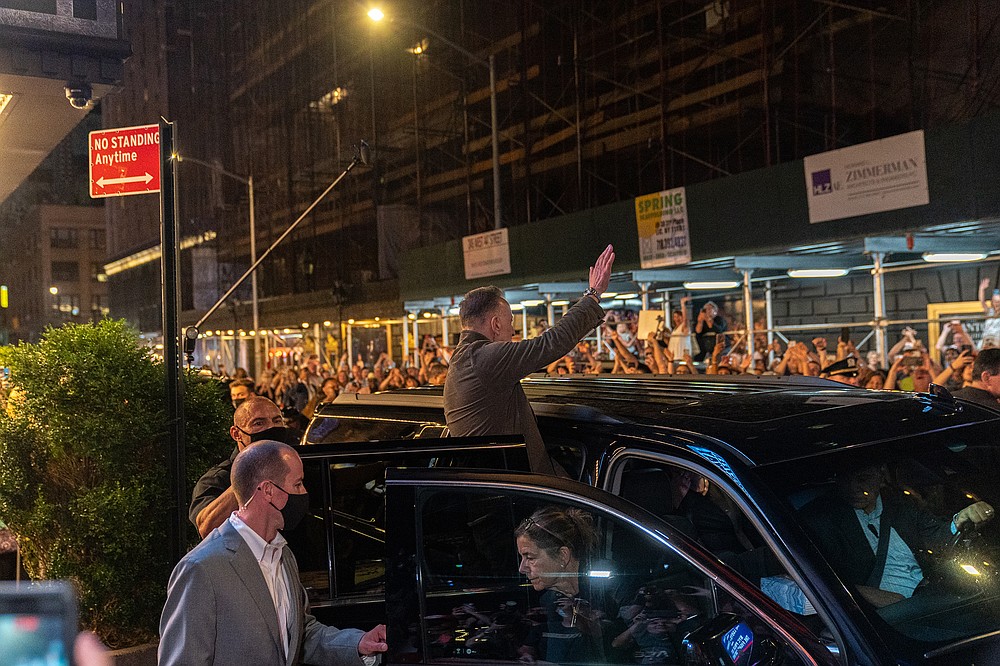 Bruce Springsteen greets his fans after his Broadway show at the St. James Theatre on June 26. (The Washington Post/Jeenah Moon)

"We're not restarting. We're resuming," said Kevin McCollum, who has the distinction of putting back on the boards two original musicals — "Six" and a stage adaptation of "Mrs. Doubtfire" — that were in previews when the coronavirus shut Broadway down on March 12, 2020.

"It has challenged every control issue a producer can have," McCollum said, noting that the preparations include reworking 16 different contracts with 14 different unions. "That's making sure we have work rules that we all understand. And the good news is that science has turned in our favor."

Some worry is building about an increase in street crime: A 21-year-old man was shot and wounded by a stray bullet in Times Square on June 27. And the multitude of storefronts plastered with "Available" signs is a grim reminder of the fiscal toll of the past 16 months.

And despite McCollum's belief that science has made gathering indoors safe again, there is the ever-present anxiety that the pandemic might re-intensify. "Springsteen on Broadway" has a vaccination mandate for all ticket holders, and so far, no problems have been reported. Owing to the virus' unpredictability, other shows are awaiting government instructions on specific protocols, although the expectation is that masks and social distancing will not be required.

On the streets, though, one senses a growing confidence in the approach of normality. The symphony of noisy New York, reduced for what felt like forever to a desultory hum, seems to be rising in volume every day now. On sunny summer days and humid nights, the streets are filled again; restaurants that had been shuttered for months, then reopened with a few outdoor tables, are packed nightly, inside and out. That one can sit at a bar with a Corona or a Cosmopolitan or a Coke feels like a minor miracle.

Comeback plans are not evolving solely on Broadway. Culture across the city is beginning to reseed the canyons. Deeply satisfying new exhibitions on the Medicis and the 20th-century painter and social activist Alice Neel are huge summer draws at the Metropolitan Museum of Art. "Little Island," a handsome new off-Broadway oasis for dance, music and theater, built on 150 tulip-shaped concrete pillars in the Hudson River, is attracting crowds of performing-arts-starved New Yorkers for free and low-price shows. The first Shakespeare in Central Park since 2019 — a free "Merry Wives," adapted by Jocelyn Bioh from "The Merry Wives of Windsor" — promises to be a seasonal highlight at the open-air Delacorte Theatre.

For performers, atrophied muscles will have to be re-exercised.

"I won't have acted in two years," said Matthew Broderick, who with wife Sarah Jessica Parker is planning a return to Broadway in Neil Simon's "Plaza Suite" in February — a production that was stopped in its tracks by the pandemic. "I hope," he added wryly, "I remember how to do it."

That hope resonates all over town. "Last March, I thought, 'When am I going to have a New York night again?'" Joshua Henry, the Broadway singer-actor, declared as he jump-started the citywide rebirth with a vivacious hourlong set with a four-piece band in late June on Little Island. "And here we are!"

Springsteen may have had the honor of strumming the first chord back, but Jon Michael Hill will have the history-making distinction of speaking the first line back in a play. Antoinette Chinonye Nwandu's "Pass Over" — one of several plays this season on theater's biggest platform by playwrights of color — begins previews Aug. 4 at the August Wilson Theatre, with Hill intoning the words of his character, Moses.

"I'm a little nervous about it, but nervous is good," Hill said of his return to the piece, built around a pair of young Black men biding their time on a blighted city corner. Nwandu has said she wrote the drama in response to the 2012 killing of Trayvon Martin, a Black teenager.

"We'll have to see how it goes, if people are still open to the conversation," Hill added. "But unfortunately, it's a story of 'always' in this country."

So much of the life of this city is built on a foundation of cultural enrichment that even the renovation and reopening of a theater bookstore makes news. Lin-Manuel Miranda and one of his "Hamilton" collaborators, director Thomas Kail, took it upon themselves to save the dying Drama Book Shop, moving it a couple of blocks to West 39th Street and giving set designer David Korins creative rein. He devised a winding sculpture of 2,500 books that snakes across the ceiling of a handsome store devoted to playwrights' and historians' words.

"I guess it's us and Bruce reopening Broadway," Kail said at a news conference in the shop. "Hamilton" restarts, along with "Wicked, "The Lion King" and "Chicago," on Sept. 14. 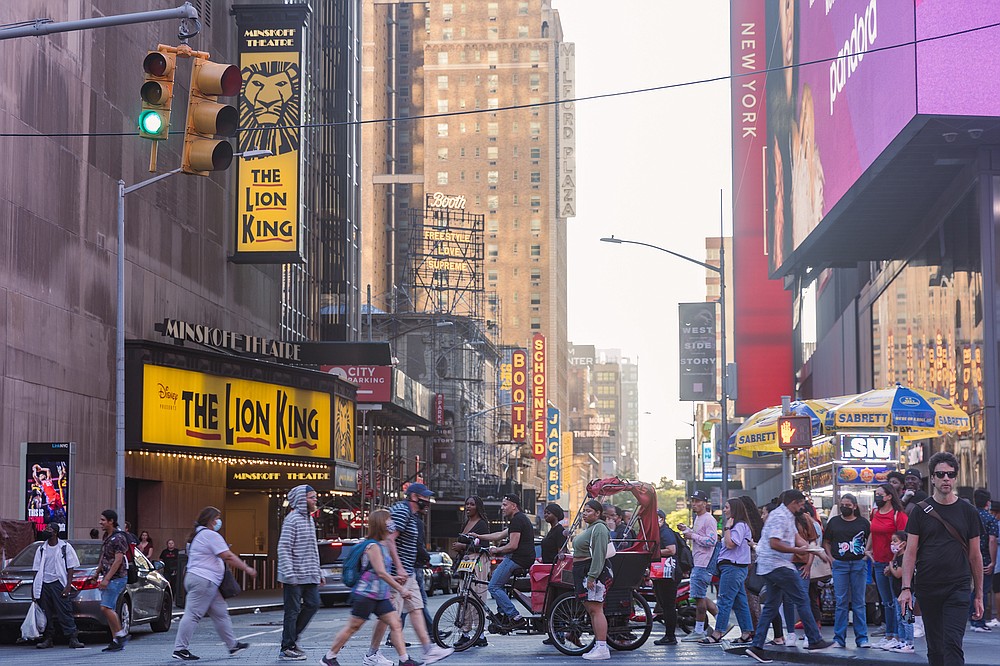 The theater district of Manhattan is teeming once again with pedestrian traffic. (The Washington Post/Jeenah Moon)

How this reopening rolls out is, of course, of enormous consequence: The entire city is banking on a smooth return.

"What we have with this moment is a level of attention on Broadway that frankly will be unprecedented in our lifetimes," said Rick Miramontez, a leading publicist for Broadway shows.

No organization may have more at stake than Disney Theatrical Productions, the arm of Disney that is reopening its two long Broadway runners: "The Lion King" in the Minskoff Theatre on Sept. 14, and "Aladdin" in the Disney-owned New Amsterdam Theatre on Sept. 28.

"We're doing TV, radio and print ads with lots of color, lots of joy, to remind you that we're here again," said Thomas Schumacher, president of Disney Theatrical Productions and one of a small cadre of producers who worked closely with New York state to get live performance back on track. He and Senior Vice President Anne Quart have in fact been traveling the globe, tasked with launching 18 touring and sit-down productions in Germany, Japan, New Zealand and the United Kingdom, among other locations. A team of 40 employees is being dispatched with them.

"There are eight brand-new productions that have never seen the light of day by any human, and then another 12 that are reopening," Quart said by Zoom from London. "We've been planning for this in some configuration for the whole time that we've been shut down. And we rewrote the plan 15, 20 times."

On West 42nd Street, at the center of the theatrical universe, the New Amsterdam's shuttered facade has looked cold and forlorn for months. That fallow period now has an expiration date — the day coming at us fast, when "Aladdin's" Genie rises from the lamp once more.

"I'm very much looking forward to being able to take the front gate up," Quart said, "and have it feel like a living, breathing thing again."