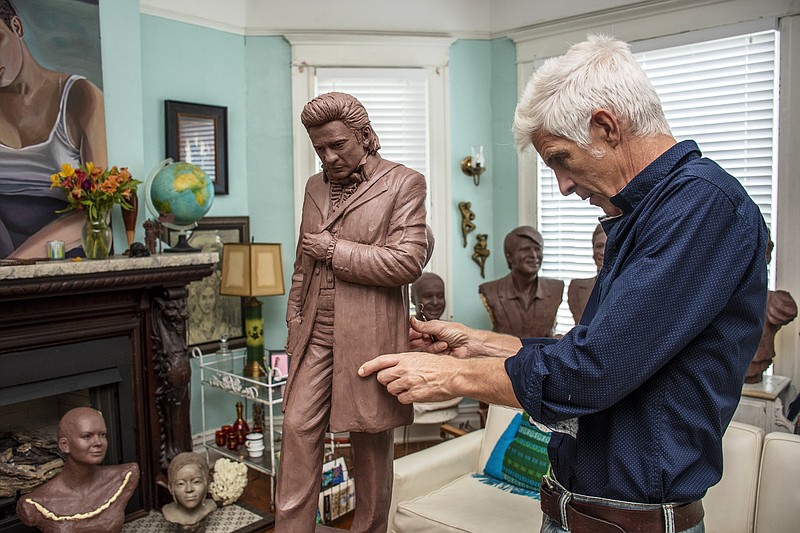 Artist Kevin Kresse makes a few adjustments on his clay model of Johnny Cash at his home. In June, Kresse was selected to create a statue of Cash to reside in the U.S. Capitol — one of two statues representing Arkansas. (Arkansas Democrat-Gazette/Cary Jenkins)

Somewhere in Little Rock's Stifft Station, the legends of Arkansas music have gathered in Kevin Kresse's home for a reunion. Reclining on a midcentury sofa, the longtime artist glances to his right to smile back at Louis Jordan while over his left shoulder, Levon Helm hits a hard note, mouth wide, eyes closed, keeping time with Glen Campbell on lead guitar.

Each musician here carries the same earthen hue and bears the literal and figural fingerprints of Kresse, their creator, who sculpted these busts from clay. Honing the lines of Al Green's turtleneck or caressing the proud arc of Sister Loretta Tharpe's chin, the North Little Rock-born artist grew to know each of these giants in a unique way. When he looks at them now, it's as if they share a special language of a pitch and tone inaudible to the rest of us.

The late Johnny Cash, even among this legendary roster, speaks loudest of all.

"It's hard to describe and put your finger on," Kresse says. "It's almost like you don't want to look at the magic directly in the eye, or you're afraid that it will disappear."

Cash is here in triplicate. There's a bust of the young Kingsland-born singer who walked into Sun Studios in Memphis to unleash "Hey Porter" and "Cry! Cry! Cry!" and with them, his career. Another sculpture, Cash as middle-aged performer, activist and musical bridge builder, sits yonder near the front door. And to Kresse's immediate right stands a three-foot-tall statue of The Man in Black, guitar slung over his back, Bible in hand, eyes cast downward.

It's a remarkably poignant rendition, not just for Cash fans, but for the Capitol Arts and Grounds Commission and the National Statuary Hall steering committee in Washington. In June, Kresse's work was selected to be cast in bronze and reside in the U.S. Capitol, one of two statues representing Arkansas. 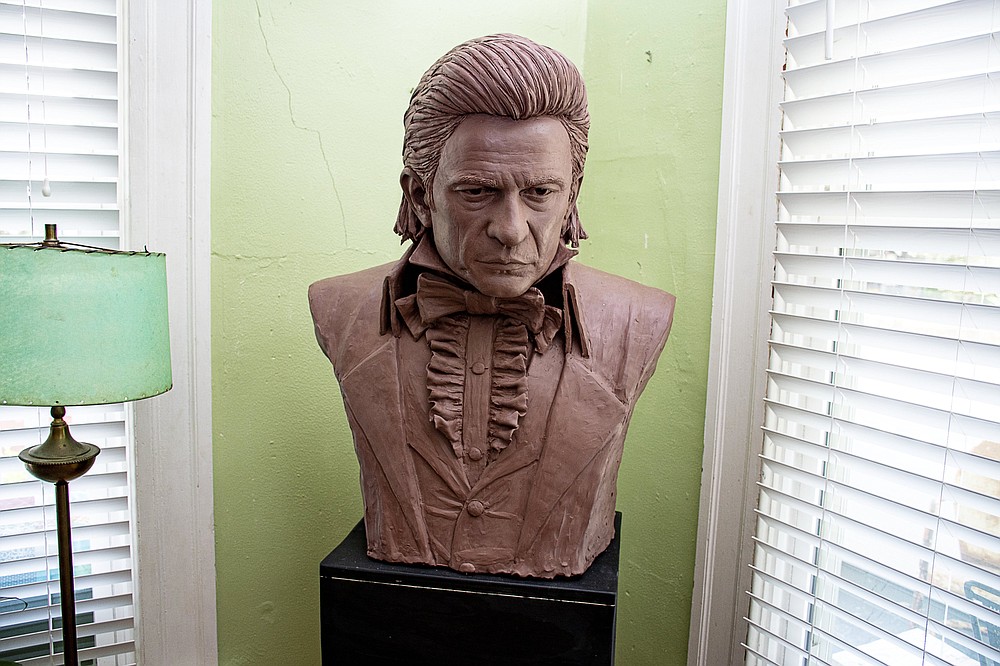 A life-size clay bust of Johnny Cash is one of three Cash likenesses adorning the home of Kevin Kresse. Kresse is creating a statue of Cash for inclusion in the U.S. Capitol. For Kresse, a Natural State artist and a Cash fan, it’s the dream of a lifetime. (Arkansas Democrat-Gazette/Cary Jenkins)

DREAM OF A LIFETIME

For a Natural State artist, and a Cash fan to boot, it was more than the opportunity of a career, it was the dream of a lifetime.

"To be a native son, doing a native son for the U.S. Capitol, I don't know that it's fully sunk in, really," Kresse says. "If it had been someone else — a businessperson or a politician or anything — I obviously would have entered. And if I had won, I would have been thrilled. But for it to be Johnny Cash, for it to be someone who was already in my wheelhouse of passions, I think that's where the magic of it all is."

Of course, seeing the finished product belies the work and strain that went into the actual creative process of capturing the man behind the myth. As with any subject, the line between realism and caricature is a fine one indeed.

"In the beginning, you are just sort of trying to get a likeness. You're just trying to get the anatomy in the right ballpark," he says. "Once you get there, the smallest movements can change the feel of the piece so much. That's really where you go from technician to artist.

"If you Google image sculptures of Johnny Cash, you'll see a lot of swings and misses. Technically, he's off. I mean, no one's face is symmetrical, but his is off just enough to make you think it's on. But it's not. If you don't get those subtle irregularities, it's not him."

And, of course, being Johnny Cash, there's the additional pressure of capturing the essence of everything that made him what he was and what he represented to people. Understanding those many elements and distilling them into a single work was mentally and physically draining, requiring considerable research and the full breadth of Kresse's artistic skill.

"Johnny is such a big subject," he says. "If you're doing a biopic on him and you have a couple of hours to try to flesh him out a little bit, that still comes short. So, to freeze a moment of somebody who reaches across genres — I mean, think about how many different groups claim him. There's gospel; he's in the Rock & Roll Hall of Fame; he's in the Country Music Hall of Fame. If there was a punk music hall of fame, he'd be in the punk music hall of fame.

"And, as I told my wife [Bridget], there was a lot of pressure I put on myself, being the only Arkansas artist in the running, to represent Arkansas well and to show that world-class art can come from here and that I can do this." 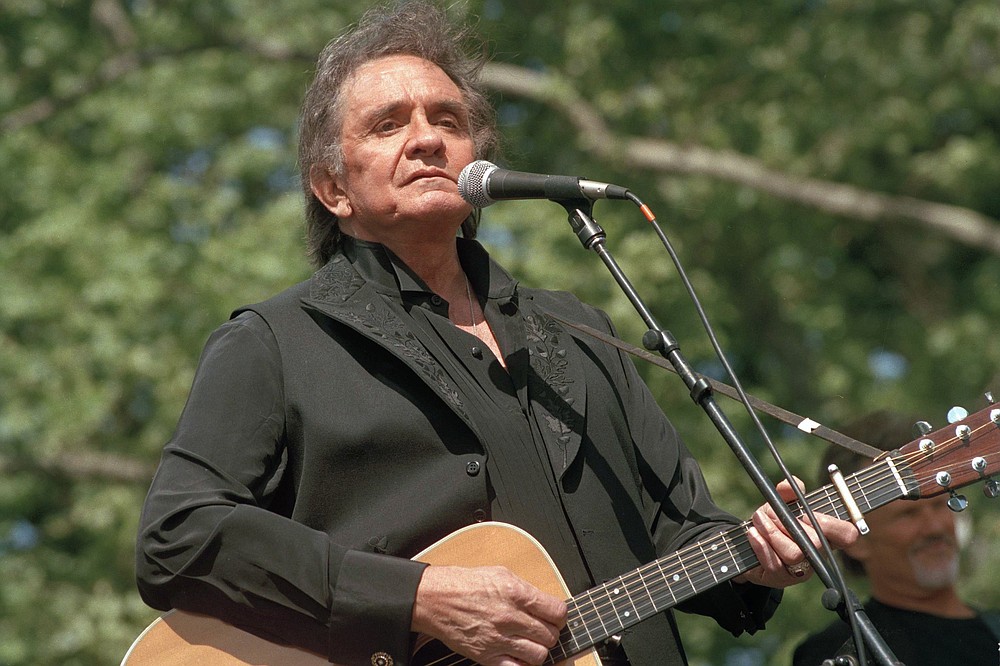 Bridget Kresse, as fierce a defender of The Natural State and its heritage as you will find, pulls no punches in describing the importance of the project.

"I'm born and raised in Arkansas and I've lived lots of places," she says. "It's so important to communicate nationally and internationally that there's intelligence here. Johnny Cash exhibited so much depth and intelligence and goodness and charity — all of these beautiful things, including his Southern-ness.

"It's like, you don't want to do some bull---- pose, right? You need to capture who the hell he was. He had a paunch; don't skinny him up. Don't fix him. His hair was a little disheveled. You can't change that. Kevin was reading and watching all of these stories, because it was just so damn important to get it right."

Getting to the final product was challenging in every way. Kresse had to pick an era of Cash's life for the physical representation, then imbue the influence of all other eras into it. Choosing Cash in middle age meant draping his expression in the wisdom and ravages of pain, success and sorrow over time.

"The Johnny Cash part kept getting in the way. I was trying to get from Johnny Cash to J.R.," says Kresse, referencing Cash's given name. "There would be times where I would go, 'Oh my God, come on.' I hit a couple of dark points where I felt like I had been working and working and he just wasn't where I wanted him, where I knew he needed to be.

"I talked with Michelangelo, I talked with Bernini. I talked like, what am I missing? I did a lot of talking with Johnny along the way."

The original idea was a more public-facing pose, but the more Kresse researched, the more interesting Cash in private reflection became. This provided its own set of challenges, including a judging date bearing down on him, whereby he would formally present his model of Cash before the Capitol Arts and Grounds Commission and the National Statuary Hall steering committee at the state Capitol. It was a bad time to be stuck artistically, so Kresse hit upon an idea.

"January of this year, [I] heard 'You're a finalist,'" he says. "I was still working on another pose, because I wasn't happy with what I had. I needed a model, but finding someone who's 6'2", barrel-chested with a size 13 shoe, you can't go to Walmart and get yourself one. "

So, he got online and began observing the stars of Johnny Cash tribute shows.

"Most of them were doing young Johnny. But then, I found Terry Lee Goffee and he's been doing it for close to 20 years. And he looked physically like the part. So, I wrote him and I told him who I was and what I was doing and he wrote back and said, 'I would be honored to model for you.'" 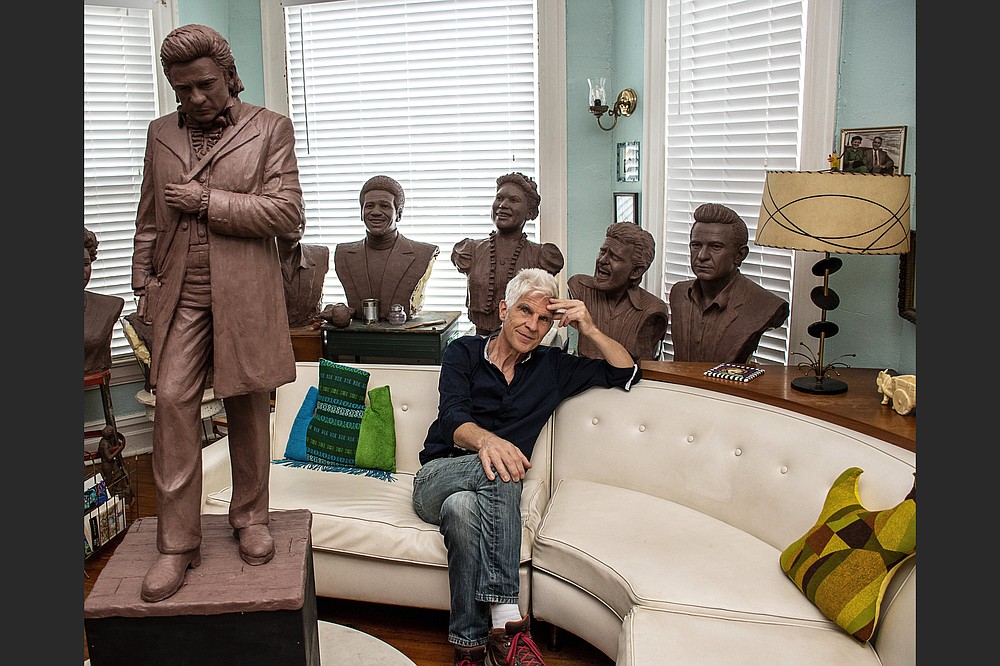 Artist Kevin Kresse sits among clay models he created of Arkansas singing legends — including Johnny Cash, whose statue, created by Kresse and cast in bronze, will be placed in the U.S. Capitol. (Arkansas Democrat-Gazette/Cary Jenkins)

The two artists met in Nashville, Tenn. Goffee, an Ohioan, was authentic right down to Cash's preferred make and model of guitar and strap, and got his stage outfits from the singer's 88-year-old former tailor. He also matched Cash's measurements ... right down to his ankles.

In costume, Goffee gave Kresse the closest brush he would get in this life to Johnny Cash and after running through a few poses, artistic lightning struck.

"We were close, but it was weight going forward," Kresse says. "He was moving around and all of a sudden, he stopped and when he dropped back into this pose, the hair on my neck went up. I was like, 'Don't move.'"

From somewhere, Johnny Cash had finally spoken back, and the result is a haunting, illuminating portrait as nuanced and complex as the singer himself. Viewing the statue, one is left to decide whether Cash is in the final restless moments before the curtain rises or the gathering gloom after it has closed. From over here, he's praying in thanksgiving for the fortune he has received. Shift 10 degrees and he's pleading for strength against the kudzu demons that sprouted in childhood and clung to him much of his life.

All of Cash — the sacred, secular and savage — come together seamlessly in one remarkable artistic creation.

"I love any kind of symbolism I can find within a piece," Kresse says. "The faith part was so integral to him throughout his whole life, but I didn't want the Bible being out front or anything like that; just kind of tucked away. It's in his right hand and the guitar strap goes from that source, up through his hand, which is over his chest and heart where the soul and the sound of his voice comes from. That connects to a guitar on his back. It felt to me almost like a backpack that took him all over the world to, in a sense, spread his gospel."

While there are a number of steps left to produce the statue that will stand for Arkansas in the U.S. Capitol, Kresse says the hard part is over. In fact, he says the work really ended — and the joy began — the moment Goffee shifted his weight, as if Cash himself had positioned him from up above.

"When I finally hit it, the idea of the so-called competition and the winning of it, I'm not saying it wasn't important, but I felt free," Kresse says. "After chasing that elusive Johnny for so long, I finally got to J.R. Cash and then finally, I was free. So let the chips fall where they may. I've proven something to myself that I'm happy with and that I can stand by and be proud of.

"To win the competition was just a big cherry on top."

CORRECTION: Sister Rosetta Tharpe is among a number of likenesses of Arkansas music legends at the home of their creator, Little Rock artist Kevin Kresse. Kresse, whose likeness of the late singer Johnny Cash was selected to be sculpted and and displayed the U.S. Capitol, presented his model of Cash before the Capitol Arts and Grounds Commission and the National Statuary Hall steering committee at the state Capitol in June. Tharpe’s name was misspelled and the location of Kresse’s presentation was incorrect in an earlier version of this story.