Hidden Gems: A humble cloth sack tells a story of enslavement and separation 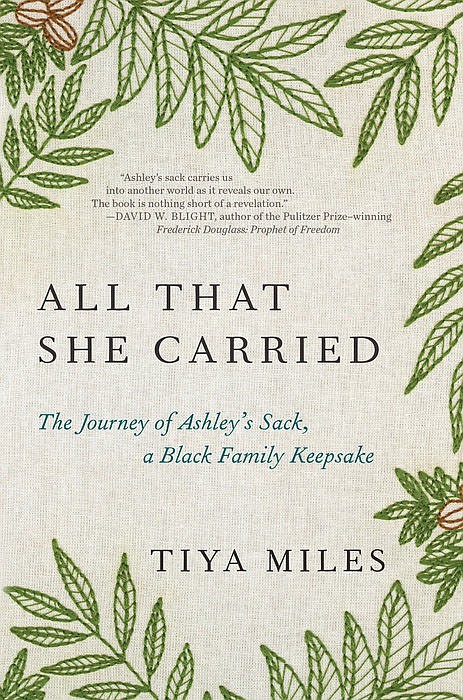 All That She Carried

In 2018, the Trump administration instituted a "zero tolerance" immigration policy that separated at least 2,800 children from their parents at the southern border. Many Americans were appalled, perceiving the actions as going against the country's values. But in fact, ripping families apart is deeply woven into the fabric of American history. Whether because of boarding schools for Native Americans in the 19th and 20th centuries, forced Mexican repatriation during the Great Depression, or the enslavement of Indigenous and African people from the colonial period on, parents and children were routinely separated. For more than 200 years, untold numbers of babies, toddlers and youngsters were torn from their families as enslavers sold them or gifted them to heirs. Others saw their parents put up for sale. How children and adults dealt with the constant threat and reality of forced abandonment and separation is hard to imagine. Tiya Miles, a professor of history at Harvard University and the author of five previous books, comes close. Her lyrical account presents the obscene inhumanity of slavery while celebrating the humanity of its victims.

"All That She Carried" is organized around a rare and haunting object. In 2007, a white woman bought an old cloth sack, once used to hold cotton or animal feed, at a flea market. The words embroidered on the sack made her realize that she had found something special. She sold the bag to Middleton Place plantation outside Charleston, S.C., which eventually loaned it to the National Museum of African American History and Culture in D.C., where it is currently on display.

The sack was embroidered in 1921 by a woman named Ruth Middleton with 10 short lines relaying the history of her female ancestors, including her grandmother Ashley. Nearly 70 years earlier in South Carolina, this Ashley, just 9 years old, was handed the sack by her enslaved mother, Rose, as she was about to be sold away. In the sack, Rose had placed a folded dress, three handfuls of pecans and a braid of her hair, and "told her" -- Rose's words recorded in red stitches on the bag by her descendant -- "It be filled with my Love always." Ashley never saw her mother again.

Miles combed South Carolina plantation records to find information about Rose and Ashley, and she weaves her findings into fascinating and informative stories. Yet in the end, her research, while highly plausible, could not be conclusive. Systemic racism extends to the archives. African Americans are either not present in the documents, or they are rendered through white eyes. To circumvent such "archival diminishment," Black feminist historians, Miles among them, are developing innovative ways to get at the past experiences of Black women. Miles explains in her introduction that her methods included "stretching historical documents, bending time, and imagining alternative realities into and alongside archival fissures." In addition, she examined actual items enslaved people made and used, uncovering how these keepsakes expressed their experiences and histories. The result is a deeply layered and insightful book.

Miles places Rose and Ashley's story in the larger history of Indigenous and African slavery in South Carolina from the 17th century through the Civil War and emancipation. The lives of Rose, Ashley and Ashley's daughter Rosa and granddaughter Ruth are traced through Reconstruction, Jim Crow segregation, the Great Migration and post-World War I African American society in Philadelphia, where Ruth moved in her teens. Where historical information is lacking, Miles effectively draws on novels and the published and unpublished memoirs of numerous African American women to imagine what the archives cannot reveal.

Miles explores in depth the meanings of the items Rose placed in Ashley's sack. A dress, for instance, not merely protected a daughter from the sun or the cold but provided a shield, however flimsy, against the sexual predation and assault African American girls and women routinely faced. Nuts were a "survival food," packed with calories that might relieve hunger for a spell. Pecans could also be traded, as they were still a luxury in the South. Hair held great symbolic meaning in the 19th century, not only for African Americans but for whites, too. And all three items -- clothing, food and hair -- figured prominently in the uneven power struggles between enslavers and enslaved.

But the book is more than a compelling primer on African American history or an indictment of America's moral failures. Throughout, Miles reflects on love. The love of enslaved mothers for their children. The love of the author for her grandmother. The love with which enslaved women's hands wove fabric, sewed clothing and stitched quilts. These items helped their families to survive but also served as mnemonic devices that combated the erasure of their histories, their existence. In the hands of a gifted historian like Miles, such beloved things form an alternative archive from which to restore Black women's past emotions and experiences.

Equal measure historical exploration, methodological experimentation and moral exhortation, Miles calls her work a "meditation" rather than a monograph. That seems right, and while it may not be traditional history, it is certainly great history. "All That She Carried" is a broad and bold reflection on American history, African American resilience, and the human capacity for love and perseverance in the face of soul-crushing madness.

It seems that some would want to forbid the teaching of books like this one in our schools and universities. Those trying to distract us with the bugaboo of critical race theory fail to see how much we all need not only a reckoning with slavery and its legacies, but examples of courage and persistence. As Miles reminds us, in the face of the "political and planetary emergency" that confronts us, we all need to pack our sacks and gain the courage to become "love's practitioners."

Marjoleine Kars teaches history at the University of Maryland Baltimore County, and is the author of "Blood on the River," about the massive 1763 slave rebellion in Dutch Guyana.

‘All That She Carried: The Journey of Ashley’s Sack, a Black Family Keepsake’

Print Headline: A humble cloth sack tells a story of enslavement and separation