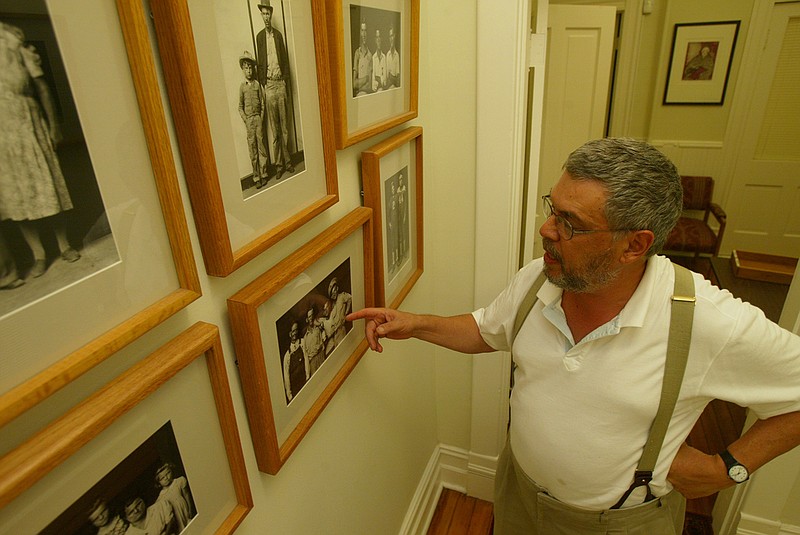 FILE — Peter Miller tells the story Tuesday of the subjects of one of the Mike Disfarmer prints hanging in his Little Rock office in this Aug. 23, 2005 file photo. (Arkansas Democrat-Gazette/STATON BREIDENTHAL)

An eccentric Heber Springs photographer died in his studio in 1959.

But Mike Disfarmer did leave behind thousands of glass-plate negatives of expressionless Arkansans -- some holding babies, lovers or gigantic catfish.

In the 1970s, Disfarmer was "discovered" by the art world.

"Disfarmer's portraits are among the most moving documents of rural life in the American south between 1930 and 1959," according to the International Center of Photography in New York City. The center's Disfarmer photos can be seen at https://bit.ly/3riIeub.

It appears that some people have profited off Disfarmer's photography, but some of his relatives say they've been left out, and they are his rightful heirs.

Disfarmer had six siblings, all of whom are now deceased. Their known direct, or first-line, relatives number about 100.

In the filing, Stewart said the negatives from Disfarmer's studio weren't included when his estate was probated. They were taken "by unrelated third parties who then used them for their own gain and benefit," according to the court filing.

Not so, say attorneys for the Arkansas Museum of Fine Arts Foundation, which received about 3,000 of the negatives as a donation in 1977, when the Little Rock museum was known as the Arkansas Arts Center. https://bit.ly/3erIi5q.

John Tull, an attorney representing the foundation, said the Disfarmer saga has had more twists and turns than a John Grisham novel.

Joe Allbright bought everything in Disfarmer's studio at an estate sale for $5, according to a brief filed Wednesday opposing the motion to reopen the case.

The $5 deposit can be seen as a Dec. 5, 1959, line item on the estate's ledger at Arkansas National Bank in Heber Springs, according to the museum foundation's brief.

Among the glass negatives, Allbright found $8,000 in savings bonds, which he returned to the estate. The $8,000 deposit shows up as a line item on the ledger for Dec. 19, 1959, according to the brief.

In her 2014 book, "Disfarmer: Man Behind the Camera," Kim O. Davis wrote that Allbright "purchased the contents of Disfarmer's decaying studio at an estate sale for $5 from a local bank acting as the administrator of the estate."

That, too, is mentioned in the museum's brief.

Peter Miller said he bought the negatives from Allbright in the early 1970s for $5.

Miller said he restored as many of the negatives as he could and gave the vast majority of them to the Arkansas Arts Center Foundation.

The museum, in turn, has spent hundreds of thousands of dollars restoring and preserving the negatives, according to their brief.

Stewart said he appreciates what the museum has done to preserve the negatives.

"The Arkansas Art Center are good people," Stewart said. "Our family never wanted to hurt them in any way. We wish only to obtain what is rightfully ours and work with the Arts Center to further our uncle's legacy."

A hearing in the case is scheduled for Aug. 3.

It appears Disfarmer tried to distance himself from his family.

According to a 1939 article in Heber Springs' weekly newspaper, after living in the town for 25 years, Disfarmer petitioned the circuit court to have his name changed from Mike Meyer, saying he was blown by a tornado at the age of 3 to the home of an Indiana couple named Meyer, with whom he lived until they both died. (Some court documents spell his last name as Myers.)

"Mr. Disfarmer also asserted in his petition that because of his parentage and line of descent being unknown, the Meyer family, by whom he was reared, and their many family and kinsmen had on many occasions been embarrassed and humiliated, and that because of the petitioner's status, the Meyer family often expressed as being desirous to disown him," according to the article in The Heber Springs Times and The Headlight.

So, believing "meyer" meant "farmer" in German, he changed his name to Disfarmer to indicate that he was not a farmer (or a "meyer").

Miller, who was editor of The Arkansas Sun newspaper in Heber Springs, published old photographs in the paper under the headline "Someday Your Prints Will Come."

Allbright, who had served as mayor of Heber Springs, provided a few Disfarmer photos for Miller to use in his newspaper in the early 1970s.

"I saw them and thought they were wonderful," said Miller, a Little Rock lawyer who now lives in South Carolina.

Miller was taken with the images, but so was bacteria.

Miller said he promised Allbright that he would restore the negatives for the sake of Arkansas history and art.

"I just felt an obligation," Miller said. "Joe gave them to me and said 'preserve them,' and I said 'I will.'"

Miller said he didn't know how to restore negatives, so he contacted Kodak, and the company invited him to Rochester, N.Y., to learn the process. Miller said he made the trip and stayed there for a few days.

Restoring the negatives was a tedious, yearlong procedure.

"A lot of the emulsion had dried out, so the images were literally peeling off the glass," Miller said.

For some negatives, Miller said he used a wetting agent to reattach the images.

"There were 6,000 of them," he said. "A lot of them were ruined. They were stuck together. You couldn't save them. I was able to save about 3,000 of them. ... My interest has always been in the images themselves. To me, the whole thing was a labor of love because I love the pictures, and I love the way the people are so honestly portrayed."

"She was the one person I knew in the publishing business," Miller said. "Once Julia had them, she just loved them."

She published them in the magazine in 1973 and arranged for a museum show in New York.

Later, Scully and Miller worked together on the 1976 book "Disfarmer: The Heber Springs Portraits."

Originally from New York and with a background in photography, Miller was affiliated with The Group Inc., a commune that grew out of the Dan Blocker Singers, named for the man who played Hoss on the television show "Bonanza," according to the Encyclopedia of Arkansas.

Disenchanted with life in Hollywood, The Group moved to Arkansas in 1968 and established a number of successful businesses over the years, including the internet service provider Aristotle Inc., according to the encyclopedia article.

Miller said the negatives he saved dated from about 1938-47.

It was a time when many men went off to war and didn't want to return to farm life afterward, Miller said, mentioning the song "How Ya Gonna Keep 'em Down on the Farm (After They've Seen Paree)?"

"It's that narrow period of time when society, especially rural society, had this enormous cataclysmic change," he said. "All the boys coming back from World War II. They were country boys when they left, and they were changed from their experience in the war."

Disfarmer had no enlarger and made only contact prints of the postcard-sized negatives, Miller said. Enlarging the images brought out stunning detail that couldn't be seen in the small prints.

"You see a little girl with a nasty face," Miller said. "If you look closer, you see she's got chigger bites all over her legs."

Miller said the Disfarmer studio building on Main Street was torn down to make way for a Piggly Wiggly supermarket.

Disfarmer's estate went through probate court with the $18,146.80 he had in Arkansas National Bank being divvied up -- after claims, taxes and fees were paid -- between his three surviving siblings and the children of the other three siblings.

Stewart is representing a group of Disfarmer relatives in the legal matter.

In his petition, Stewart said he and other heirs had recently discovered "extremely valuable" property belonging to Disfarmer that wasn't administered during the original probate of his estate.

"Those negatives were not inventoried by the previous administrators, administered and distributed to the Decedent's heirs," according to Stewart's petition, which was prepared by Grant E. Fortson, a Little Rock attorney.

In his court filing, Stewart said Disfarmer was the "sole owner of the copyrights" of his photographs at the time of his death, and those rights should have been passed on to his heirs.

In the petition, Stewart says he is qualified to serve as special administrator of the estate.

But nothing new has been recently "discovered," according to attorneys for the Arkansas Museum of Fine Arts Foundation.

The negatives were "discovered and sold by the Estate's administrator almost 60 years ago," wrote Tull and R. Ryan Younger in their brief on behalf of the foundation.

"Mr. Stewart's becoming aware of the property and developing an interest in its purported value 60 years after it was sold does not mean that it has been discovered within the meaning of the probate code," wrote Tull and Younger. "Because Mr. Stewart has not discovered the property and because he offers no other reason for this Court to reopen the Estate, his petition should be denied."

The administration of Disfarmer's estate was handled, not by family members, but by officers of Arkansas National Bank, "who fulfilled their every obligation to distribute, settle, and close Mr. Disfarmer's estate," they wrote.

The proceeds of the sale of the negatives, along with the remainder of Disfarmer's estate, were distributed to his heirs by order of the probate court, and the estate was closed in 1961, according to the brief.

The heirs signed their checks.

"Not one of those individuals objected to the accounting or distribution of the Estate," wrote Tull and Younger. "Mr. Stewart cannot take a position now that is inconsistent with the positions taken by his relatives, and predecessors in interest, almost six decades ago."

Also, "the sale of the photographic negatives divested the heirs of any interest in the copyright along with the physical property that embodied the copyright," according to the museum foundation's brief.

The foundation has "held the negatives for the benefit of the public and made them available to scholars, researchers, curators, and photography historians," according to the brief. "The revenue, if any, that the Foundation has been able to generate from the negatives is negligible compared to the cost to preserve them."

According to a recent article in The New Yorker, Stewart's group was offered a settlement of $150,000 but turned it down. Apparently offended, they also fired their attorney, David Deal, who led a similar effort regarding the estate of Vivian Maier, a Chicago nanny/street photographer whose photos -- like Disfarmer's -- were discovered by the art world only after her death.

"The offer was over a year ago, and at that time money was not a top priority," Stewart told the Arkansas Democrat-Gazette. "The family was asking for reasonable access and use of the negatives, which we believe actually belong to the family. This reasonable access was not part of the offer."

According to Tull and Younger, in his 1939 petition, Disfarmer documented his estrangement from his family and their "fear that he might attempt to inherit" as reasons for his request to change his name.

"This Court, to the general amusement of Mr. Disfarmer's neighbors and clients, granted the petition," according to the museum foundation's brief.