OPINION | COLUMNISTS: Sandwiching in the past

Bread-wrapped discoveries from years gone by reveal much about our history by PAUL FREEDMAN, KEN ALBALA, MEGAN ELIAS, ANDREW P. HALEY AND IMOGENE L. LIM THE CONVERSATION | July 18, 2021 at 1:55 a.m. 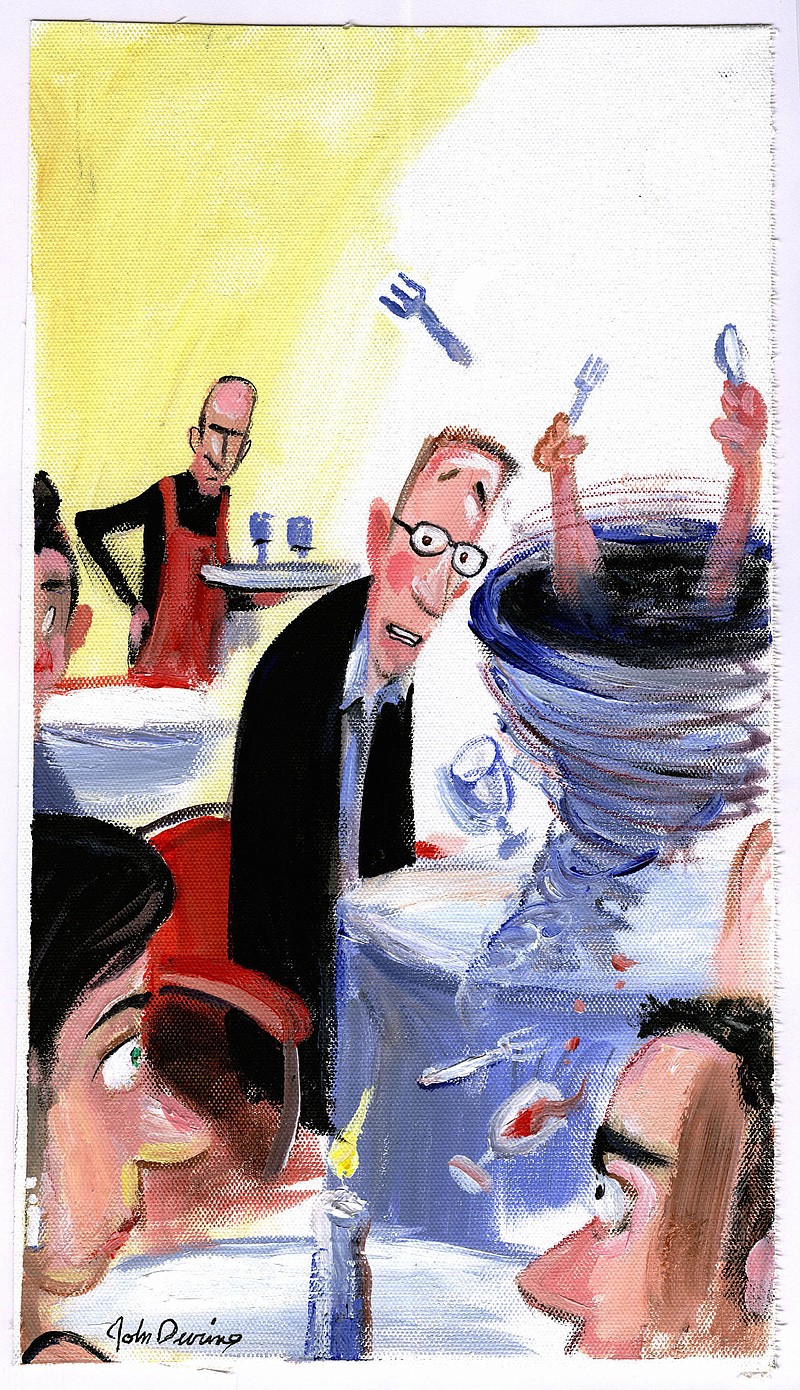 Everyone has a favorite sandwich, often prepared to an exacting degree of specification: Turkey or ham? Grilled or toasted? Mayo or mustard? White or whole wheat?

As food historians, we want to share how the sandwiches we eat (or used to eat) do more than fill us up during our lunch breaks. In their stories are themes of immigration and globalization, of class and gender, and of resourcefulness and creativity.

• The tuna salad sandwich originated from an impulse to conserve, only to become a symbol of excess.

In the 19th century--before the era of supermarkets and cheap groceries--most Americans avoided wasting food. Scraps of chicken, ham or fish from supper would be mixed with mayonnaise and served on lettuce for lunch. Leftovers of celery, pickles and olives--served as supper "relishes"--would also be folded into the mix.

The versions of these salads that incorporated fish tended to use salmon, whitefish or trout. Most Americans didn't cook (or even know of) tuna.

Around the end of the 19th century, middle-class women began to spend more time in public, patronizing department stores, lectures and museums. Since social conventions kept these women out of the saloons where men ate, lunch restaurants opened up to cater to this new clientele. They offered women exactly the kind of foods they had served each other at home: salads. While salads made at home often were composed of leftovers, those at lunch restaurants were made from scratch. Fish and shellfish salads were typical fare.

When further social and economic changes brought women into the public as office and department store workers, they found fish salads waiting for them at the affordable lunch counters patronized by busy urban workers. Unlike the ladies' lunch, the office lunch hour had time limits. So lunch counters came up with the idea of offering the salads between two pieces of bread, which sped up table turnover and encouraged patrons to get lunch to go.

When canned tuna was introduced in the early 20th century, lunch counters and home cooks could skip the step of cooking a fish and go straight to the salad. But there was a downside: The immense popularity of canned tuna led to the growth of a global industry that has severely depleted stocks and led to the unintended slaughter of millions of dolphins. A clever way to use dinner scraps has become a global crisis of conscience and capitalism.

• "Gonna get a big dish of beef chow mein," Warren Zevon sings in his 1978 hit "Werewolves of London," a nod to the popular Chinese stir-fried noodle dish.

During that same decade, Alika and the Happy Samoans, the house band for a Chinese restaurant in Fall River, Mass., also paid tribute to chow mein with a song titled "Chow Mein Sandwich."

The chow mein sandwich is the quintessential "East meets West" food, largely associated with New England's Chinese restaurants--specifically, those of Fall River, a city crowded with textile mills near the Rhode Island border.

The sandwich became popular in the 1920s because it was filling and cheap: Workers munched on them in factory canteens, while their kids ate them for lunch in the parish schools, especially on meatless Fridays. It would go on to be available at some five-and-dime lunch counters, like Kresge's and Woolworth, and even at Nathan's in Coney Island.

It's exactly what it sounds like: a sandwich filled with chow mein (deep-fried flat noodles, topped with a ladle of brown gravy, onions, celery and bean sprouts). If you want to make your own authentic sandwich at home, use Hoo Mee Chow Mein Mix, still made in Fall River. It can be served in a bun (à la sloppy joe) or between sliced white bread, much like a hot turkey sandwich with gravy. The classic meal includes the sandwich, french fries and orange soda.

For those who grew up in the Fall River area, the chow mein sandwich is a reminder of home. Just ask famous chef (and Fall River native) Emeril Lagasse, who came up with his own "Fall River chow mein" recipe.

And at one time, Fall River expats living in Los Angeles would hold a "Fall River Day." On the menu: Chow mein sandwiches.

• Unlike many American food trends of the 1890s, such as the Waldorf salad and chafing dishes, the club sandwich has endured, immune to obsolescence.

The sandwich originated in the country's stuffy gentlemen's clubs, which are known to this day for a conservatism that includes loyalty to outdated cuisine. (The Wilmington Club in Delaware continues to serve terrapin, while the Philadelphia Club's specialties include veal and ham pie.) So the club sandwich's spread to the rest of the population, along with its lasting popularity, is a testament to its inventiveness and appeal.

A two-layer affair, the club sandwich calls for three pieces of toasted bread spread with mayonnaise and filled with chicken or turkey, bacon, lettuce and tomato. Usually the sandwich is cut into two triangles and held together with a toothpick stuck in each half.

Some believe it should be eaten with a fork and knife, and its blend of elegance and blandness make the club sandwich a permanent feature of country club and city club cuisine.

As far back as 1889, there are references to a Union Club sandwich of turkey or ham on toast. The Saratoga Club-House offered a club sandwich on its menu beginning in 1894.

Until the 1920s, sandwiches were identified with ladies' lunch places.The first club sandwich recipe comes from an 1899 book of "salads, sandwiches and chafing-dish dainties," and its most famous proponent was Wallis Simpson, the American woman whom Edward VIII abdicated the throne of Great Britain to marry.

Nonetheless, an 1889 article from the New York Sun titled "An Appetizing Sandwich: A Dainty Treat That Has Made a New York Chef Popular" describes the Union Club sandwich as appropriate for a post-theater supper, or something light to be eaten before a nightcap. This was one type of sandwich that men could indulge in, the article seemed to be saying, as long as it wasn't eaten for lunch.

• While the peanut butter and jelly sandwich eventually became a staple of elementary school cafeterias, it has upper-crust origins.

One of the earliest known recipes that suggested including jelly with peanut butter appeared in a 1901 issue of the Boston Cooking School Magazine.

"For variety," author Julia Davis Chandler wrote, "some day try making little sandwiches, or bread fingers, of three very thin layers of bread and two of filling, one of peanut paste, whatever brand you prefer, and currant or crabapple jelly for the other. The combination is delicious, and so far as I know original."

The sandwich moved from garden parties to lunchboxes in the 1920s, when peanut butter started to be mass-produced with hydrogenated vegetable oil and sugar. Marketers of the Skippy brand targeted children as a potential new audience, and thus the association with school lunches was forged.

The classic version of the sandwich is made with soft sliced white bread, creamy or chunky peanut butter, and jelly. Outside of the United States, the peanut butter and jelly sandwich is rare; much of the world views the combination as repulsive.

These days, many try to avoid white bread and hydrogenated fats. Nonetheless, the sandwich has a nostalgic appeal for many Americans, and recipes for high-end versions--with freshly ground peanuts, artisanal bread or unusual jams--circulate on the Internet.

• The Scotch woodcock is probably not Scottish. It's arguably not even a sandwich. A favorite of Oxford students and members of Parliament until the mid-20th century, the dish is generally prepared by layering anchovy paste and eggs on toast.

Like its cheesier cousin, the Welsh rabbit (better known as rarebit), its name is fanciful. Perhaps there was something about the name, if not the ingredients, that sparked the imagination of Miss Frances Lusk of Jackson, Miss.

Inspired to add a little British sophistication to her entertaining, she crafted her own version of the Scotch woodcock for a 1911 United Daughters of the Confederacy fundraising cookbook. Miss Lusk's woodcock sandwich mixed strained tomatoes and melted cheese, added raw eggs, and slathered the paste between layers of bread (or biscuits).

As food historian Bee Wilson argues in her history of the sandwich, American sandwiches distinguished themselves from their British counterparts by the scale of their ambition. Imitating the rising skylines of American cities, many were towering affairs that celebrated abundance.

But those sandwiches were the sandwiches of urban lunchrooms and, later, diners. In the homes of Southern clubwomen, the sandwich was a way to marry British sophistication to American creativity.

Such creative combinations weren't limited to the elites of Mississippi's capital city. In the plantation homes of the Mississippi Delta, members of the Coahoma Woman's Club served sandwiches of English walnuts, black walnuts and stuffed olives ground into a colorful paste.

Not all of these amalgamations were capped by a slice of bread, so purists might balk at calling them sandwiches. But these ladies did, and they proudly tied up their original creations with ribbons.

Print Headline: Sandwiching in the past