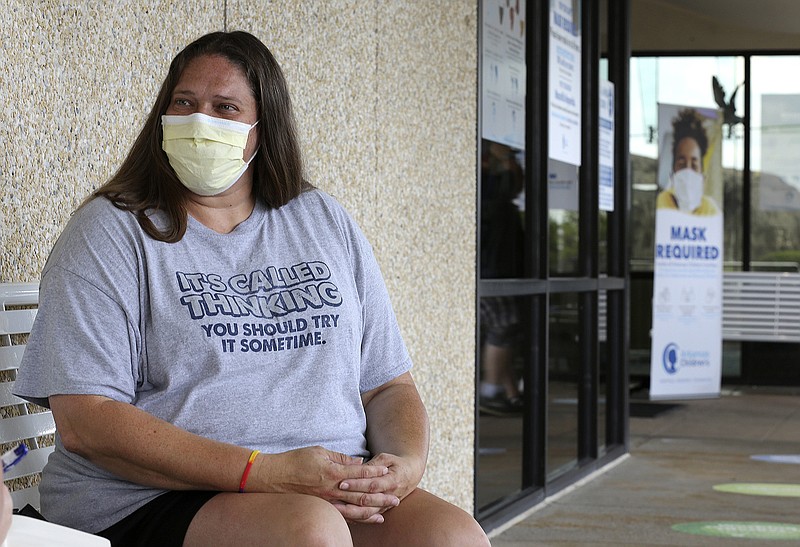 Angela Morris of Sidney talks about her child’s battle with covid-19 Thursday, outside Arkansas Children’s Hospital in Little Rock. Morris said she is overwhelmed with guilt for not getting vaccinated. (Arkansas Democrat-Gazette/Thomas Metthe

Morris had not heard her child speak since July 3, and she yearned to hear that "deepest, sweetest" voice.

With the tubes out, the medical team waited.

After a few minutes off the ventilator, Alexx's heart rate continued to climb and oxygen levels dropped.

The teenager was re-intubated, and the ventilator was turned back on.

Morris still did not get to hear Alexx's voice.

With the new school year approaching, Alexx's case underscores a growing fear among public health experts and educators across Arkansas -- that children may be more susceptible to the new strains of covid-19 circulating in the community.

On Friday, Arkansas Children's Hospital had seven covid-19 patients with two of them on ventilators, hospital spokeswoman Hilary DeMillo said.

Alexx developed a fever in late June that quickly grew to 101.3 degrees. Morris thought it was just a cold and would go away on its own.

A few days later, the family rushed Alexx to the White River Medical Center in Batesville where a covid-19 test came back positive. Alexx was quickly flown by medical helicopter to Children's Hospital in Little Rock.

"We knew how bad it could be," Anderson said. "Covid has many masks."

Morris has been by her child's bedside in the pediatric intensive care unit nearly every moment since.

Alexx's kidneys have failed, requiring 24-hour dialysis. The 13-year-old has been sedated and paralyzed to keep movement to a minimum.

Neither Alexx nor Morris had been vaccinated against the virus.

Morris tested positive for the virus during her hospital vigil, but has shown few symptoms.

Alexx was a healthy, straight-A, seventh-grade student before being diagnosed, Morris said. The teen barely left the house.

She doesn't know where they contracted the virus.

Morris said she is overwhelmed with guilt for not getting the vaccine.

"Every time I left, I had my mask on. I really thought it was just kind of like the flu, and it wasn't this big of a deal," she said. "And I was so wrong."

Gov. Asa Hutchinson dropped the mask mandate in the state on March 30 as the number of coronavirus cases was on the decline, and the state Legislature passed Act 1002 during this year's legislative session that will prohibit public mask mandates in the state beginning July 27.

"He's [Hutchinson] dropping the mask mandate so that kind of right there told me, 'Eh. It's not that bad.' It was just misleading," Morris said.

Anderson worries about Alexx's health for the long-term.

"I'm incredibly stressed," Anderson said. "I FaceTime with Angela a lot and stay up to date. She also sends me pics of the machines."

The Republican governor called to check on Alexx's mother and asked to use their story for the Arkansas Department of Health marketing campaign to encourage vaccinations.

"I called the child's mother to express my sympathy concerning their fight against covid-19," Hutchinson said. "I am praying for the family during this difficult time."

Morris said she and Alexx will both be vaccinated as soon as possible.

"I remind myself that I am human. I did not do this intentionally to my child. I tell myself that it's going to be OK, and we're going to walk out of here," Morris said. "Get your children vaccinated. Get vaccinated yourselves. Even if one person doesn't get vaccinated, they could be spreading it to 10 more people. And one of them could be somebody's child -- like mine."

Morris has big plans after Alexx is released from the hospital. The 13-year-old has been begging to move from the small community of Sidney, population 179, to Fayetteville, population 85,166, Morris said.

A week ago, a crowdfunding campaign was set up to raise money for the move.

Alexx is an artist who sketches on canvas and is drawn to Fayetteville's creative art culture, Morris said.

"So we're moving to Fayetteville," she said. 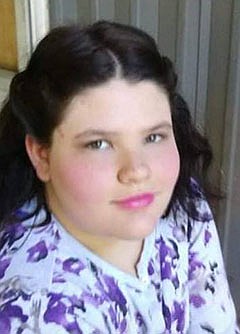 Alexx Morris-Cooper in an undated family photo. (Special to the Democrat-Gazette)