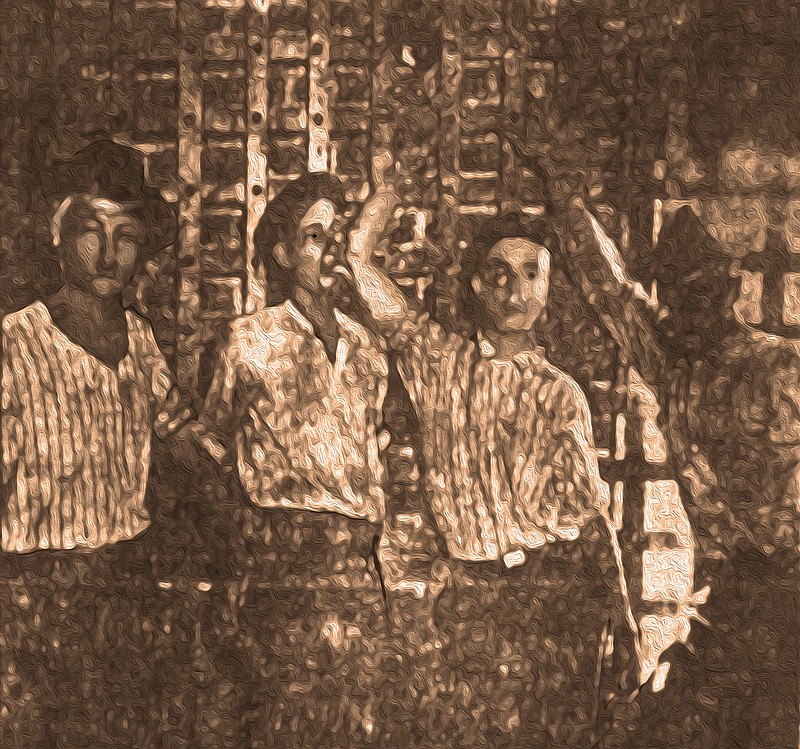 On July 14, 1921, some boys had a spat while playing in a ditch east of Piggott. According to a report in the Arkansas Gazette, one of them — 11-year-old Ira Montgomery — left angry. On his way home, he told some kids that the other boys had drowned Jesse Tweedle.

This lie was overheard by the little daughter of Mrs. Kirk Glasco, who telephoned Mrs. James Crosno, Jesse's mother. Mrs. Crosno ran a mile to the ditch in sweltering heat only to learn her Jesse was fine.

Meanwhile, "news" of his demise rocketed across Piggott via telephone switchboard. A crowd assembled at the ditch. Among them was Shelmer Herd, son of a Baptist preacher. He reportedly urged the not-so-little Jesse to whip the boy who started the rumor.

Somebody pointed to Signol Harris, 12. Jesse proceeded to pummel this child.

Along came Signol's older brother, Norman — employee of the Cotton Belt railroad. He had an altercation with Mrs. Crosno. She collapsed, had to be carried home and was delirious all night.

This was not the worst outcome of a boyish prank in Arkansas that week.

At North Little Rock on the night of July 17, a bus driver spotted boys raiding a melon patch owned by W.K. Finch. S.L. Talley drove his bus to the Finch home at 2403 E. Second St., where Finch and his 35-year-old daughter, Mrs. Anna Snyder, hopped on board for a lift back to the melon patch.

Finch called to the boys from the bus, asking if they'd found cantaloupes. They laughed that they had. As he and his daughter clambered off the bus, a .38-caliber revolver she was holding fired, twice.

One shot hit 10-year-old Thomas Stovall, who was running away. Tommie died shortly after, at 9:15 p.m. in a doctor's office on Main Street. His parents, Mr. and Mrs. Thomas M. Stovall, lived at 309 Poplar St. He had three sisters.

Snyder said she hadn't realized the gun was cocked. After three jury trials, she was convicted of voluntary manslaughter and sentenced to four years in the state reformatory for women. She sought a fourth trial, but her appeal was denied in March 1923.

One year later, North Little Rock police arrested her father for public intoxication, and the jailer, a friend, locked him up overnight for safekeeping. Finch was found dead in his cell, a victim of tainted liquor.

The July 17, 1921, the Gazette also included a followup report on a July 11 incident in which four young residents of Arkadelphia robbed a lumber store at Delight in broad daylight. They were making good on their escape until they came across a bunch of people with shotguns blocking the road at Antoine, and then a wheel bounced off the boys' Ford.

The posse peppered them with bird or squirrel shot in a running gunfight, but they got away.

They split up. One did some more shooting at the sheriff before he was captured. At sundown, the other three stopped for water at a farmhouse near Gurdon and to lurk around for the next train. Surrounded, they surrendered.

They became "the boy bandits" in The Southern Standard at Arkadelphia, The Nashville News, the Arkansas Democrat; and the Gazette even sent an indulgent reporter and photographer to Nashville to chat with them in jail. That reporter decided they were "ice cream fiends" who had read too much Jesse James literature.

The photo is mud, but squint and you'll see bandaged and bruised teens affecting rakish poses, with cigarettes. The youngest was 15, the oldest, 19.

They were described as mirthful and keen to appear gritty, but from good homes. As the Nashville News put it, "The boys all come from good families, and their demeanor, while they attempt to show toughness, is such that one knows they have had the proper training."

Here's a bit of the feature on them from the July 17 Gazette:

"Bring us some ice cream and give us some cigarettes, and we'll tell you all you want to know about our Jesse James stunt," said Olin Ham, acting as spokesman for the four boy bandits held in jail here for the daylight hold-up of the store of the Delight Mercantile Company at Delight last Monday afternoon, when they were visited today by the Gazette's correspondent.

"When the boys were assured that ice cream was on its way to the jail, they were all smiles, and, between puffs of smoke, talked freely of the escapade."

They said they'd traveled in Ham's Ford to Pike City on July 10 in search of work and got a job but not a place to stay. So they headed for home (rainstorms might explain this). When they reached Delight at sunup, they were hungry. Finding no work, they decided to stage the holdup.

They denied published reports that had them stealing the Ford; cutting the phone line between Delight and Antoine; casing a bank at Delight and deciding against robbing it because 1) bookkeeper Aline Kizzia looked like a screamer, or 2) there were too many farmers in town. They said, no, they did not buy lumber before robbing the lumber store of cash and shoes.

They mocked the posse for being scared of them and claimed they only started shooting in self-defense and because they had gone too far to "turn yellow."

Olin, the youngest and "unusually bright," was the son of Mr. and Mrs. C.G. Ham. Olin's father had worked in grocery stores for 30 years but had turned to farming, the Gazette said. (Census records include a Columbus Greenberry Ham who was a farmer at Arkadelphia in 1910.)

Earl Evans, 19, and Grady Evans, 17, were sons of Mr. and Mrs. Robert D. Evans. Their father was a traveling dry goods and produce dealer.

Richard Russell, 17, was the son of Mrs. W.B. Meek and worked for his stepfather, a foreman for the Missouri Pacific Railroad. He had lived in Arkadelphia less than a year. Born in Phillips County, he grew up in California.

They owned the revolvers they carried. Two said they bought them at a pawn shop.

The shots were about No. 4 size, and made no serious wounds.

They secured only about $22.50 in their robbery, and all of it was recovered by the sheriff. The Gazette reported:

"Sheriff Roy Harris has promised the boys to furnish them an ice cream freezer, and all the ingredients to make ice cream soon."

Only two boys made the $2,000 bail, Olin Ham and Grady Evans (should we conjecture that Grady's parents blamed Earl?). In September, all four pleaded guilty and were sentenced to four years in the state pen. In reporting that, the Sept. 28 Democrat seems to suggest the sentence might not have been carried out.

Helpful Reader, do you know more of this story? Can you tell us whether these memorial sites relate to the men those boys became?

I hope descendants will see this and let us know that all these kids put aside their childish ways and grew up to be good citizens.