In reversal, British leader to self-isolate 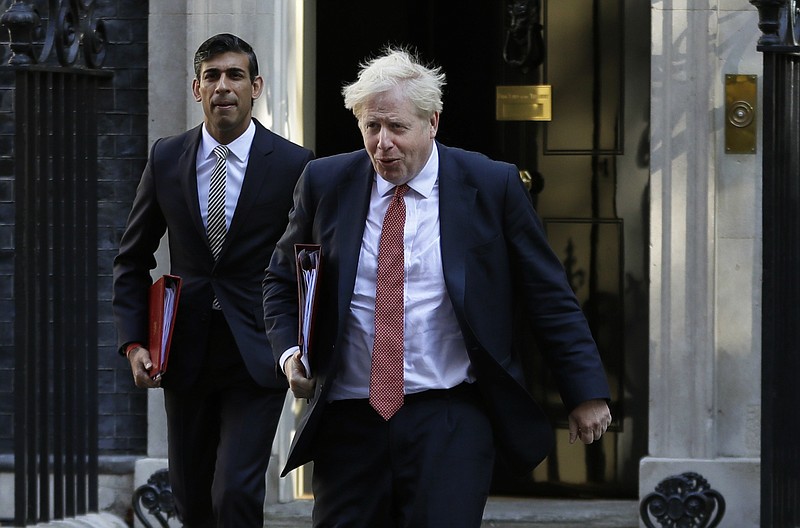 FILE - In this Tuesday, Sept. 1, 2020 file photo, Britain's Prime Minister Boris Johnson and Chancellor Rishi Sunak, left, leave Downing Street to attend a cabinet meeting in London. Johnson has been contacted by the country’s test-and-trace system as a contact of a confirmed coronavirus case. The prime minister's office says that unlike most people, he won’t have to self-isolate. But Johnson’s office says the prime minister will instead take a daily coronavirus test as part of a pilot project. The same applies to Treasury chief Rishi Sunak, who also was contacted. (AP Photo/Kirsty Wigglesworth, File)

LONDON -- British Prime Minister Boris Johnson will spend 10 days self-isolating after contact with a confirmed coronavirus case, his office said Sunday -- reversing an earlier announcement that he would not have to quarantine after facing an uproar.

Both had met recently with Health Secretary Sajid Javid, who tested positive Saturday for covid-19. Javid, who has been fully vaccinated, says he is experiencing mild symptoms.

People who are notified through the app are supposed to self-isolate for 10 days, though it is not a legal requirement. Johnson's office initially reported the prime minister and Sunak would instead take daily coronavirus tests as part of an alternative system being piloted in some workplaces, including government offices.

That plan was reversed less than three hours later after an outcry over apparent special treatment for politicians.

In a video message, Johnson said he and Sunak had "briefly" considered taking part in the pilot scheme.

"But I think it is far more important that everyone sticks to the same rules, and that's why I'm going to be self-isolating until Monday, July 26," he said.

[Video not showing up above? Click here to watch » arkansasonline.com/719johnson/]

Keir Starmer, leader of the opposition Labour Party, likened Johnson's Conservative government to bank robbers who "got caught and have now offered to give the money back."

"Boris Johnson and Rishi Sunak have been busted yet again for thinking the rules that we are all following don't apply to them," he said. "The way the prime minister conducts himself creates chaos, makes for bad government and has deadly consequences for the British public."

Britain is experiencing rising coronavirus cases due to the more infectious delta variant, and is seeing a related "ping-demic" of hundreds of thousands of people being told to quarantine by the tracing app because they have been near someone who tested positive.

Whole classes have been sent home from schools. Hospitals are short of workers. Businesses including restaurants, car manufacturers and the London subway report they are facing staff shortages because of the self-isolation rules.

The government notes it will remove the requirement for people who have been fully vaccinated to self-isolate after contact with an infected person, but not until Aug. 16.

Complete with sparkling wine, confetti and a midnight countdown, England's clubbers are celebrating "Freedom Day" in much the same way as New Year's Eve, with thousands planning to dance the night away after 17 months of empty dance floors.

The business is keen to open its doors again after losing about $55,000 a month during the pandemic, he said. Its "Freedom Day" bash starts Sunday with a countdown to midnight, when staff members plan to cut a ribbon to the dance floor and serve customers free prosecco.

Many others are deeply worried about the British government's decision to go ahead with fully reopening the economy and no longer mandating masks at a time when virus cases are on a rapid upswing.

More than 54,000 new cases were confirmed Saturday, the highest daily number since January, although reported virus deaths have stayed comparatively low so far. Officials have repeatedly expressed confidence that the U.K.'s country's vaccine rollout -- 67.8% of adults, or just over half of the total population, has received two doses -- will keep the threat to public health at bay.

Leading international scientists on Friday described England's "Freedom Day" as a threat to the whole world, and 1,200 scientists backed a letter to British medical journal The Lancet that criticized the government's decision.

"I can't think of any realistic good scenario to come out of this strategy, I'm afraid," said Julian Tang, a clinical virologist at the University of Leicester. "I think it's really a degree of how bad it's going to be."

Nightclubs in particular are potent spreading grounds, Tang said, because many in their core customer base -- people ages 18-25 -- became eligible for a first vaccine dose though the National Health Service last month and haven't yet been offered the second shots needed to boost immunity.

Johnson has urged nightclubs and other venues with big crowds to use covid-19 status certification "as a matter of social responsibility," and only to admit patrons who can show they are double-jabbed, have a negative test result or have recovered from the disease.

There is no legal requirement for them to do so, however. In a flash poll of 250 late night bars and clubs by the Night Time Industries Association last week, 83% said they won't be asking people about their covid-19 status, according to Michael Kill, the trade body's chief executive.

Many owners see the passes as a huge turn-off for customers and accuse the government of "passing the buck" to businesses.

"We've heard people will boycott businesses that adopt this," Kill said. "The last thing we want after months of closure is to be again hindered in terms of capacity to trade. Either mandate it or don't mandate it. This is putting an inordinate amount of pressure on us."

Information for this article was contributed by Sylvia Hui and Urooba Jamal of The Associated Press.