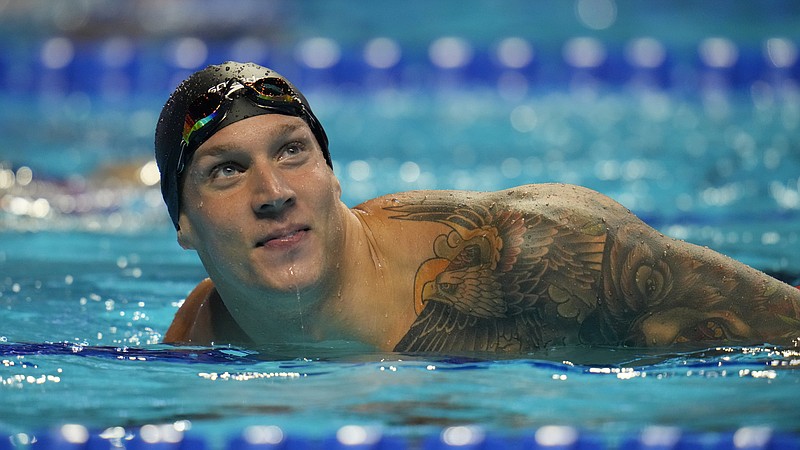 FILE - In this June 20, 2021, file photo, Caeleb Dressel reacts after the men's 50-meter freestyle during wave 2 of the U.S. Olympic Swim Trials in Omaha, Neb. For a man tabbed as swimming’s next superstar, Dressel could not be more disinterested. Of course, he cares about being fast in the pool. He just is not into anyone else’s expectations or comparisons. Fame is not his thing, either. (AP Photo/Jeff Roberson, File)

For a man tabbed as swimming's next superstar, Caeleb Dressel couldn't be more disinterested.

Of course, he cares about being fast in the pool. He just isn't into anyone else's expectations or comparisons. Fame isn't his thing, either.

"I'd rather just shut up and swim," the 24-year-old Floridian said.

Dressel could win as many as seven medals in Tokyo. He'll compete in the 50- and 100-meter freestyles and the 100 butterfly, as well as up to four relays.

Sound familiar? Michael Phelps won a historic eight golds in Beijing in 2008. But don't suggest to Dressel that he's the next coming of the all-time winningest Olympian.

"I swim different events than Michael," he said. "I'm not chasing someone else's goals. I want to chase my own."

Dressel was a bit player in his first Olympics five years ago in Rio, winning two relay gold medals while Phelps and Ryan Lochte's careers as the world's two dominant male swimmers were winding down.

The 2017 world championships in Budapest, Hungary, was Dressel's personal coming-out party. He won seven gold medals -- more than any other country.

Two years later in Gwangju, South Korea, he smashed Phelps' 10-year-old record in the 100 butterfly while winning six golds and two silvers for a record haul of eight medals.

Dressel is fast and powerful in the sprint events, usually the first one off the blocks. He stands out even before he dives in. At 6-2 and 198 pounds, with a sleeve of tattoos on his left arm and the Olympic rings tattooed on his right forearm, his upper body is all muscle. He's the one doing the insanely high vertical leaps behind the starting block.

"His talent and his explosion is just mind-blowing," said Lochte, who trained with Dressel in Gainesville, Fla., before coming up short in his bid to make a fifth Olympic team. "In practice, there is no mercy. He doesn't back down."

Dressel is just as hard on himself.

"I trash myself more than anybody," he said.

"If you didn't have a good swim, but you don't learn anything, that's a complete throwaway. That's a failure. If you have a bad swim and you learn something from it, then it's not a bad swim anymore," he said.

Unlike young swimmers, who may unquestioningly follow a coach's orders, Dressel is frank in his exchanges with coach Gregg Troy.

"It gives us a great cooperative effort to put ourselves in the best possible situation," Troy said.

While Dressel shuns comparisons to Phelps, he doesn't hesitate to reach out to the retired superstar. In the midst of the pandemic last year, a frustrated Dressel fired off a ranting text to Phelps.

"It's been great to have that support from him, from someone I don't even know that well, but he knows how the sport works," Dressel said.

So does his wife, Meghan. She swam in high school and briefly in college, giving her shared experience in understanding the ups and downs. She has a master's degree in marriage and family therapy, which she puts to good use in her own home.

Dressel said, "I can't tell you how many times I've just come home and crashed in her arms and said, 'That sucked.' "

The high school sweethearts married on Valentine's weekend in February, only moving in together after the wedding. She whips up his favorite dish -- chicken piccata -- since Dressel admits the only thing he can cook is eggs.

"I could have cried the first day after the wedding," he said. "I came home from practice and there's food ready. She dropped me off at a doctor's appointment, and I was like, 'That's how you know you're married.'

"I told Meghan two months into dating her I was going to marry her. I should have done it way earlier."

Dressel is just as interested in leading an adventurous life outside the pool.

In late 2019, he started a podcast called "The Ben and Caeleb Show" with best friend Ben Kennedy in which they hash over everything from hummus to building tables to making a bed. Last year during the pandemic, he joined his family in hiking the Appalachian Trail. He likes to hunt, fish and play video games.

"He's in this for himself and for his own self-improvement," Meghan said. "What he can learn as a human, what he can take away for himself." 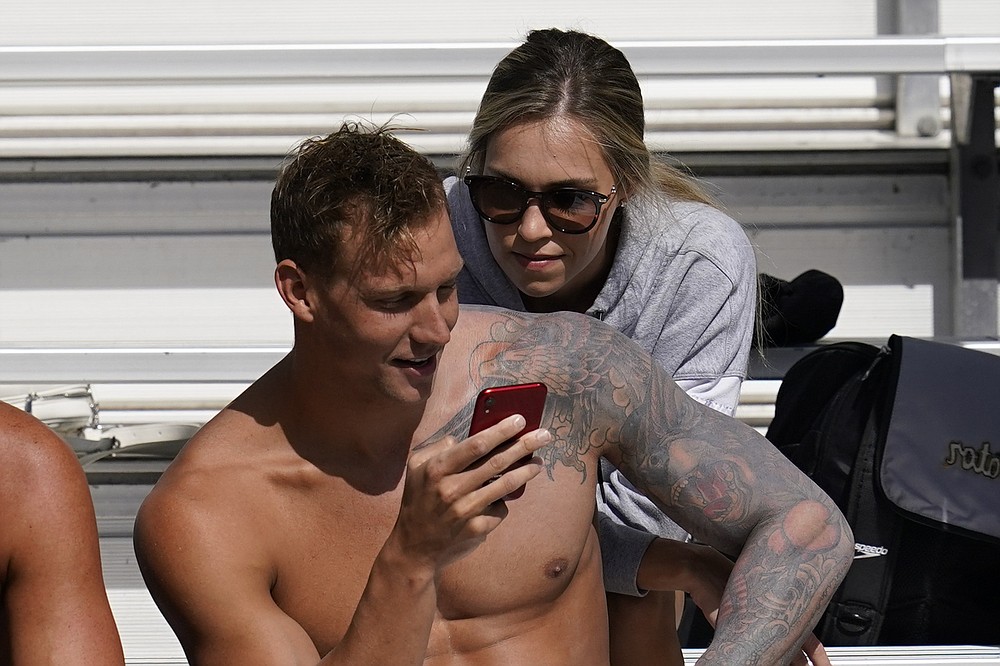 FILE - In this April 10, 2021, file photo, Caeleb Dressel, left, and his wife, Meghan Dressel, look at a phone in the stands before the TYR Pro Swim Series swim meet in Mission Viejo, Calif. For a man tabbed as swimming’s next superstar, Dressel could not be more disinterested. Of course, he cares about being fast in the pool. He just is not into anyone else’s expectations or comparisons. Fame is not his thing, either. (AP Photo/Ashley Landis, File) 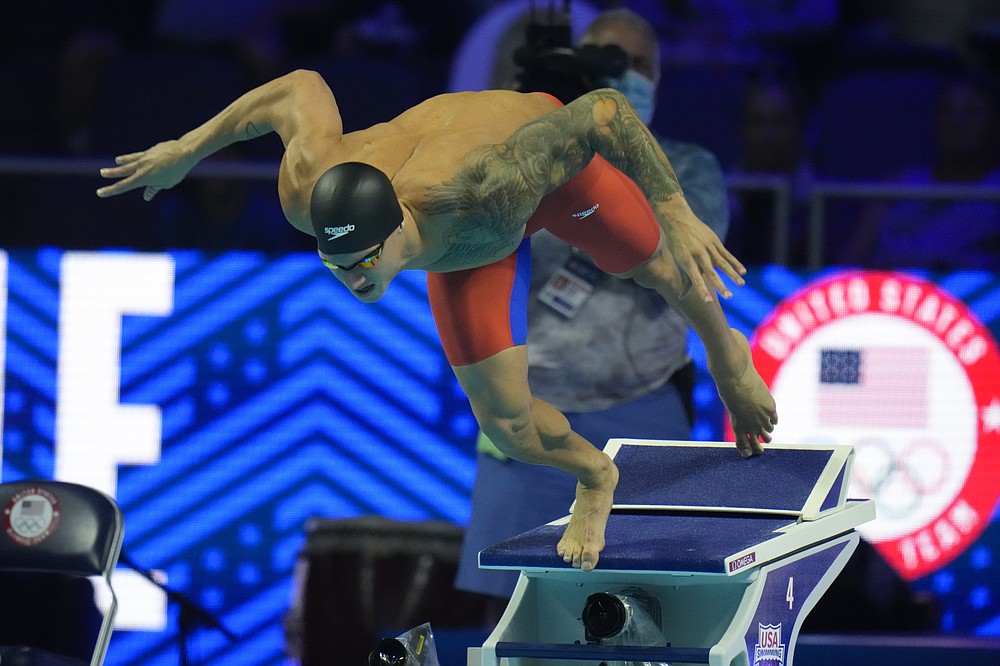 FILE - In this June 20, 2021, file photo, Caeleb Dressel participates in the men's 50 freestyle during wave 2 of the U.S. Olympic Swim Trials in Omaha, Neb. For a man tabbed as swimming’s next superstar, Dressel could not be more disinterested. Of course, he cares about being fast in the pool. He just is not into anyone else’s expectations or comparisons. Fame is not his thing, either. (AP Photo/Jeff Roberson, File) 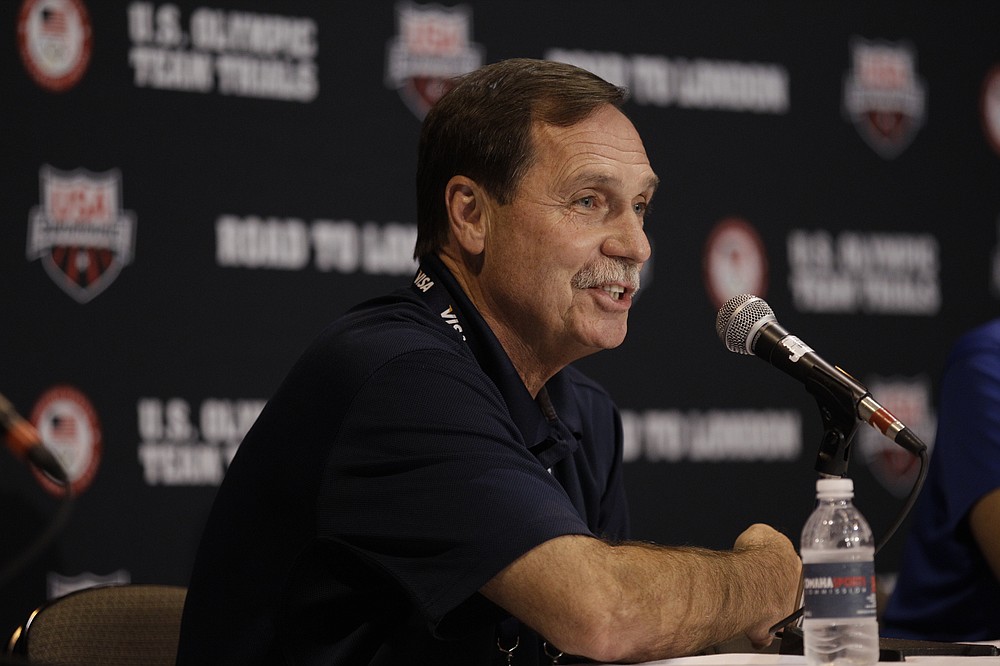