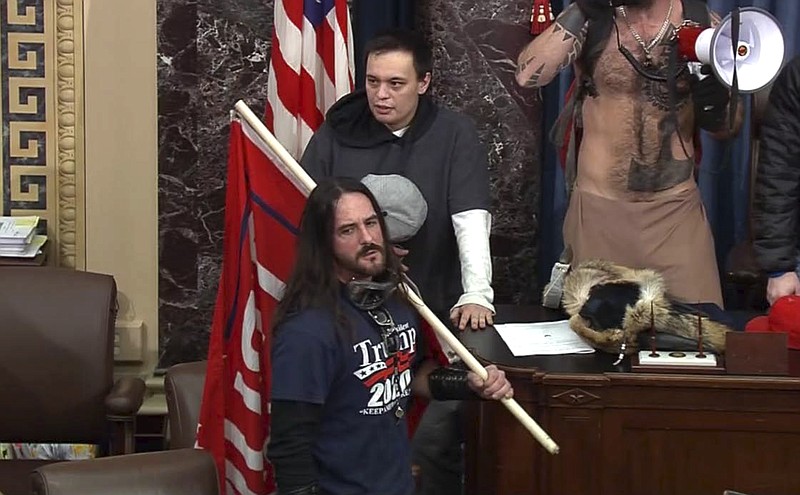 WASHINGTON -- A federal judge Monday handed down an eight-month prison term to the first person sentenced for a felony in the Jan. 6 Capitol breach, after an hourslong hearing that included arguments over whether the sentence would further divide the country, deter future attacks against the government or lead hundreds of others charged to plead guilty or face trial.

Tampa, Fla., crane operator Paul Allard Hodgkins, 38, pleaded guilty June 2 to one count of obstructing a joint session of Congress meeting to confirm the results of the 2020 presidential election. He was seen carrying a red and white "Trump 2020" flag into the well of the evacuated Senate while others stood over the vice president's abandoned chair.

"The symbolism of that act was unmistakable," U.S. District Judge Randolph Moss said in sentencing Hodgkins. "He was staking a claim on the floor of the U.S. Senate not with an American flag, but declaring his loyalty to a single individual over the nation. In that act, he captured the threat to democracy that we all witnessed that day."

The riots did far greater damage than delay Congress' tallying of the electoral votes for a few hours, the judge said. They "left a stain that will remain on our nation for decades," one that will make it "harder for all of us to tell our children and grandchildren that democracy stands as the immutable foundation of our nation," Moss said.

Hodgkins expressed remorse and regret for his actions, any damage they caused "and the way the country I love has been hurt." He said he understood that even the presence of participants who, like him, remained peaceful "may have helped embolden others to carry out the destruction that occurred."

[Video not showing up above? Click here to watch » https://www.youtube.com/watch?v=4Vpg_Aqk7rE]

"I do not and will not make any excuse, nor will I place any blame on any politician, journalist or otherwise," Hodgkins said, saying he put "passion ahead of principle." He added, "I completely acknowledge and respect that Joseph R. Biden is the rightful and respectful president of the United States."

Hodgkins described being caught up in the euphoria as he walked down Washington's most famous avenue, then followed a crowd of hundreds into the Capitol.

"If I had any idea that the protest ... would escalate [the way] it did ... I would never have ventured farther than the sidewalk of Pennsylvania Avenue," he told the judge. "This was a foolish decision on my part."

"January 6th was genuinely an act of terrorism. ... The need to preserve respect for the law is really at its pinnacle in a crime like this," Special Assistant U.S. Attorney Mona Sedky said, striking a theme amplified by Moss after a 2½-hour argument in which she said the rioters sought to subvert the election and the peaceful transfer of power through intimidation, force and violence.

Sedky argued that an 18-month prison term "will send a loud and clear message" so that "people contemplating a follow-up to January 6th will stand down ... and Mr. Hodgkins and other would-be rioters will be deterred and turn back, and so it won't happen again and again and again."

Hodgkins' attorney Patrick Leduc blasted the government's terrorism claim and warning that a harsh sentence would further divide the nation.

Leduc urged Moss to heed the words in President Abraham Lincoln's second inaugural address and show grace that each side of the partisan divide would claim for itself and deny the other.

Calling the Capitol breach "domestic terrorism" is "offensive and gaslighting the country, and it needs to stop. ... It was a protest that became a riot, period, full stop," Leduc said.

The lawyer attempted to liken the riot to violence that marred some racial-justice protests in 2020. He also invoked the First Amendment, arguing to the judge, "We need to be very careful."

But he was cut off by Moss, who said that while he was not sentencing Hodgkins based on anyone else's conduct, "I don't think that any plausible argument can be made defending what happened at the Capitol as an example of the First Amendment."

The judge added: "The chambers of Congress were emptied during the most solemn act in a democracy, of certifying who the next president is going to be, by an angry mob. ... This was not an exercise of First Amendment rights."

About 540 people of an estimated 800 who entered the Capitol have been charged. Hodgkins was one of about 50 people who made their way to the Senate floor, the "heart" and "core" of where Congress was carrying out its statutory and constitutional responsibility to confirm the president's win, Sedky said.

Both sides and the judge acknowledged that Hodgkins' sentencing could set the bar for what punishment of 100 or more defendants similarly charged with obstructing Congress might expect to face as they weigh whether to accept plea offers by prosecutors or take their chances at a trial by jury.

About 20 people have pleaded guilty. One defendant facing a misdemeanor count has been sentenced to probation, and one other was sentenced to time served of six months in prison.

Unlike other defendants, Hodgkins was not accused of other wrongdoing, such as leading or coordinating others, making online threats or conspiring with extremists. Nor did he enter a cooperation deal with prosecutors. They had sought a sentence at the midpoint of the 15 to 21 months set under advisory federal guidelines.

Prosecutors stopped short of seeking enhanced domestic terrorism penalties that it has threatened to seek against other defendants. Such enhancements could more than double the sentencing range for such defendants.

Moss acknowledged struggling over how to weigh the violence of the overall attack and the defendant's lesser role, but he knocked down Leduc's selective invocation of the 16th president.

Lincoln, in his Gettysburg Address, said the Union engaged in civil war to ensure that government of, by and for the people "did not perish from the earth," Moss noted.

"If we allow people to storm the U.S. Capitol when they don't like what the U.S. Senate or House of Representatives are doing, what are we doing to preserve democracy in our country?" Moss asked.

The judge said he believed Hodgkins' conduct was an "aberration," but that "people have to know that assaulting the Capitol and impeding the democratic process, even if you're not bearing arms, will have consequences," adding that it was more important for him "to deter others from ever again attempting anything like the events of Jan. 6th."

In an interview afterward, Leduc called Moss "a brilliant jurist" and said his decision was "very Solomon-like."

"How can I quibble?" the attorney said.

Still, Leduc likened the bitterly divided public to a married couple in which one partner seeks forgiveness and the other refuses to give it, opining, "Man, that marriage is in trouble." He added, "Paul [Hodgkins] was a vehicle to start a conversation we need to have as a country ... which is how are we going to treat each other?"

And he said Hodgkins was disappointed that a prison term was imposed. Leduc added that Hodgkins was heading back to Tampa to organize his affairs -- which will include speaking to his employer about whether imprisonment will cost him his job -- before reporting to prison in several months.

In another development, House GOP Leader Kevin McCarthy has picked five Republicans to sit on the new select committee to investigate the insurrection at the Capitol, signaling that Republicans will participate in a probe they have staunchly opposed.

McCarthy has selected Indiana Rep. Jim Banks, who recently visited former President Donald Trump on trips to the U.S.-Mexico border and Trump's New Jersey golf club, to be the top Republican on the panel, according to a Republican familiar with the decision and an aide to House Speaker Nancy Pelosi.

Pelosi, D-Calif., must approve the names before they are final, per committee rules.

McCarthy has also tapped Ohio Rep. Jim Jordan, Illinois Rep. Rodney Davis, North Dakota Rep. Kelly Armstrong and Texas Rep. Troy Nehls to serve on the panel, according to the two people, who shared the names on condition of anonymity ahead of an official announcement.

The five Republicans -- all men -- have strongly supported Trump. Banks, Jordan and Nehls all voted to overturn Biden's win, even after the rioting. Davis and Armstrong voted to certify Biden's win.

McCarthy's picks come after all but two Republicans opposed the creation of the 13-person select committee in a House vote last month, with most in the GOP arguing that the majority-Democratic panel would conduct a partisan probe. House Democrats originally attempted to create an evenly split, independent commission, but that effort fell short when it was blocked by Senate Republicans.

House Republicans have largely remained loyal to Trump despite the violent insurrection of his supporters. Banks made clear in a statement Monday evening that he would take a combative approach to his leadership on the panel, sharply criticizing the Democrats who set it up.

It is unclear if Pelosi will approve the members. The aide to Pelosi said her office had received the names from McCarthy's office.

The Democratic chair of the select committee, Mississippi Rep. Bennie Thompson, said Monday evening that he hadn't seen the names but referred the matter to Pelosi. "It's up to her," he said.

Pelosi named eight members of the committee earlier this month -- seven Democrats and Republican Rep. Liz Cheney of Wyoming, who has strongly criticized Trump and has been the most outspoken member of her caucus against the insurrection.

Information for this article was contributed by Spencer S. Hsu of The Washington Post; and by Michael Tarm, Mary Clare Jalonick and Alan Fram of The Associated Press.