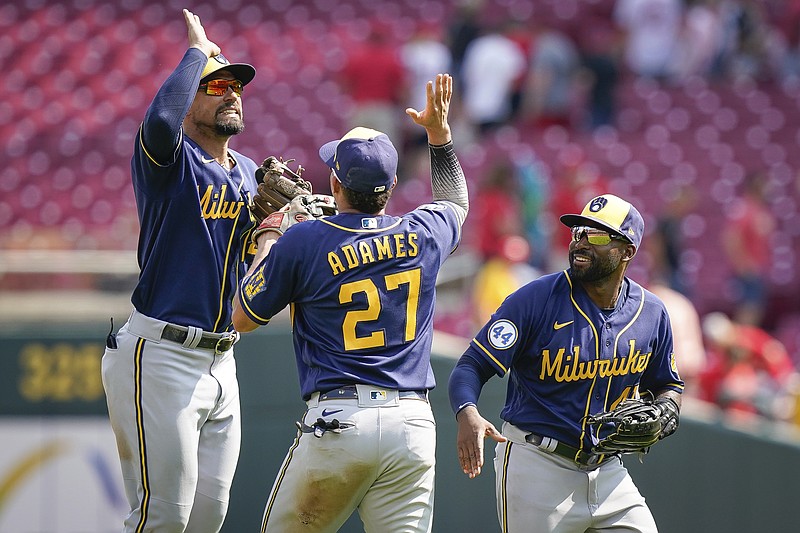 MILWAUKEE -- The Milwaukee Brewers are returning home with the biggest division lead of any National League team, but it's their success away from Milwaukee that has helped them build a seven-game cushion entering Monday.

Milwaukee's weekend sweep at NL Central rival Cincinnati improved the Brewers' road record to 29-18, the best in the majors. The Brewers begin a five-game home stand today against the Kansas City Royals.

"Everybody really likes each other, picks each other up," Yelich said. "Just the toughness. Everybody just wants to win, and we're willing to do whatever it takes to get that done."

For whatever reason, those traits have stood out more when they're away from Milwaukee. The Brewers have been even better on the road than at home, where they're 27-21.

"There's not an explanation for that," Manager Craig Counsell said. "You just play a good baseball game and that's what happens. We get into that all the time -- day-game records, road records. It's just playing good baseball."

The Brewers have been playing great baseball for the last two months as they've withstood a multitude of injuries. Their 35-16 record since May 22 is the best in baseball during that stretch.

May 22 was the day shortstop Willy Adames made his Brewers debut, and his acquisition from Tampa Bay has played a big role in Milwaukee's emergence. Adames, who was hitting .197 with the Rays, has batted .314 with a .398 on-base percentage, 11 homers and 37 RBI in 51 games with Milwaukee.

But there are plenty of other reasons why Milwaukee leads the NL Central.

The trio of All-Stars heading the rotation -- Brandon Woodruff, Corbin Burnes and Freddy Peralta -- have helped the Brewers top the majors in strikeouts (968) and rank third in ERA (3.40). Opponents are hitting .212 against Milwaukee.

All-Star closer Josh Hader struggled in the week leading up to the All-Star break but has otherwise been exceptional. All-Star catcher Omar Narvaez has batted .293 with a .387 on-base percentage, up dramatically from his .176 average and .294 OBP in 2020.

Avisail Garcia's 17 homers are three off his career high. Luis Urias, who didn't homer at all last season, has gone deep 13 times this year. Role players such as Jace Peterson and Tyrone Taylor have provided a boost.

That has enabled the Brewers to thrive even without getting the expected contributions from notable position players.

Lorenzo Cain hasn't played since May 31 due to a hamstring injury, though he's getting closer to a return. Jackie Bradley Jr. is hitting .173. Kolten Wong has gone on the injured list three times. Yelich, the 2018 NL MVP, isn't hitting for much power -- his slugging percentage is .398.

Yelich showed signs of progress by hitting a go-ahead RBI double in the 11th inning Saturday and homering Sunday.

Although the Brewers have reached the postseason each of the past three years, this big lead puts them in an unfamiliar position.

Last year, they capitalized on MLB's expanded playoff format to reach the postseason without ever being above .500. They reached the playoffs in 2018 and 2019 by making huge stretch runs.

"It's a bad week away from being a really tight race," Yelich said. "It's far, far, far from over." 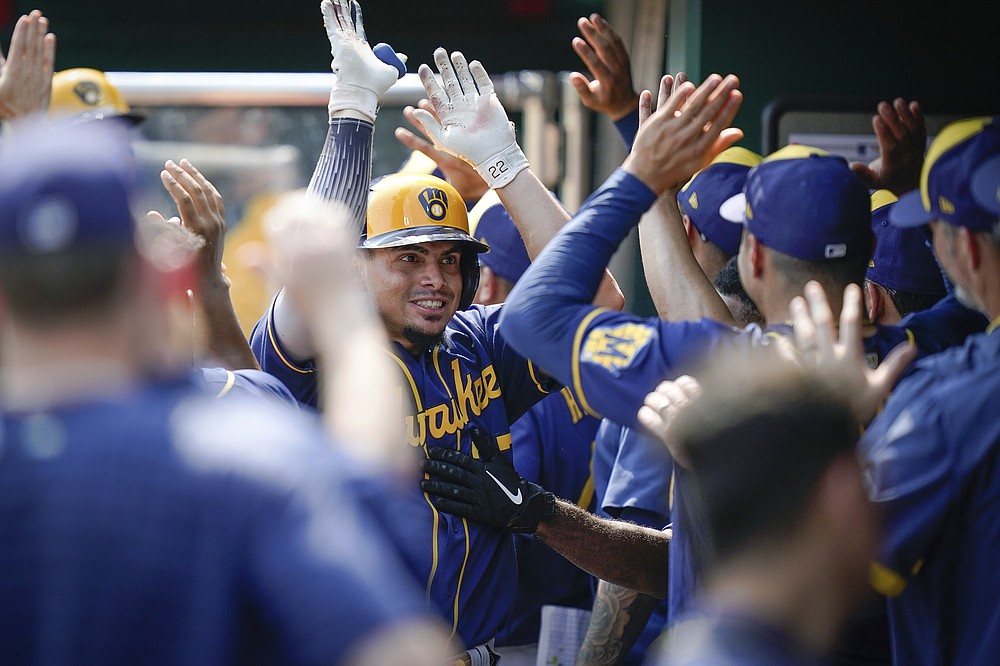 Milwaukee Brewers' Willy Adames celebrates with teammates after scoring during the ninth inning of a baseball game against the Cincinnati Reds in Cincinnati, Sunday, July 18, 2021. (AP Photo/Bryan Woolston) 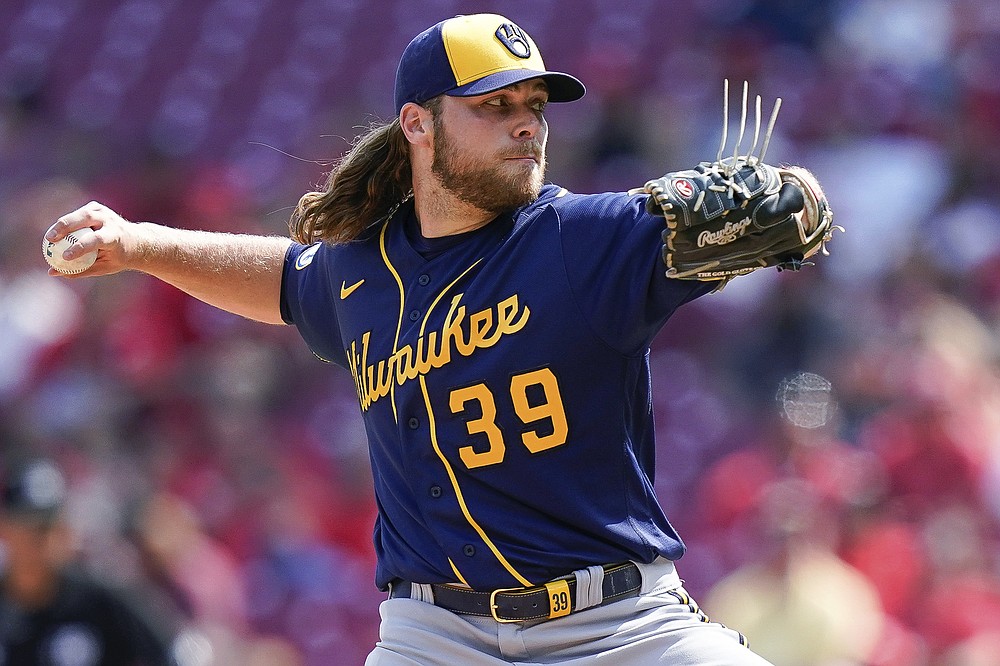 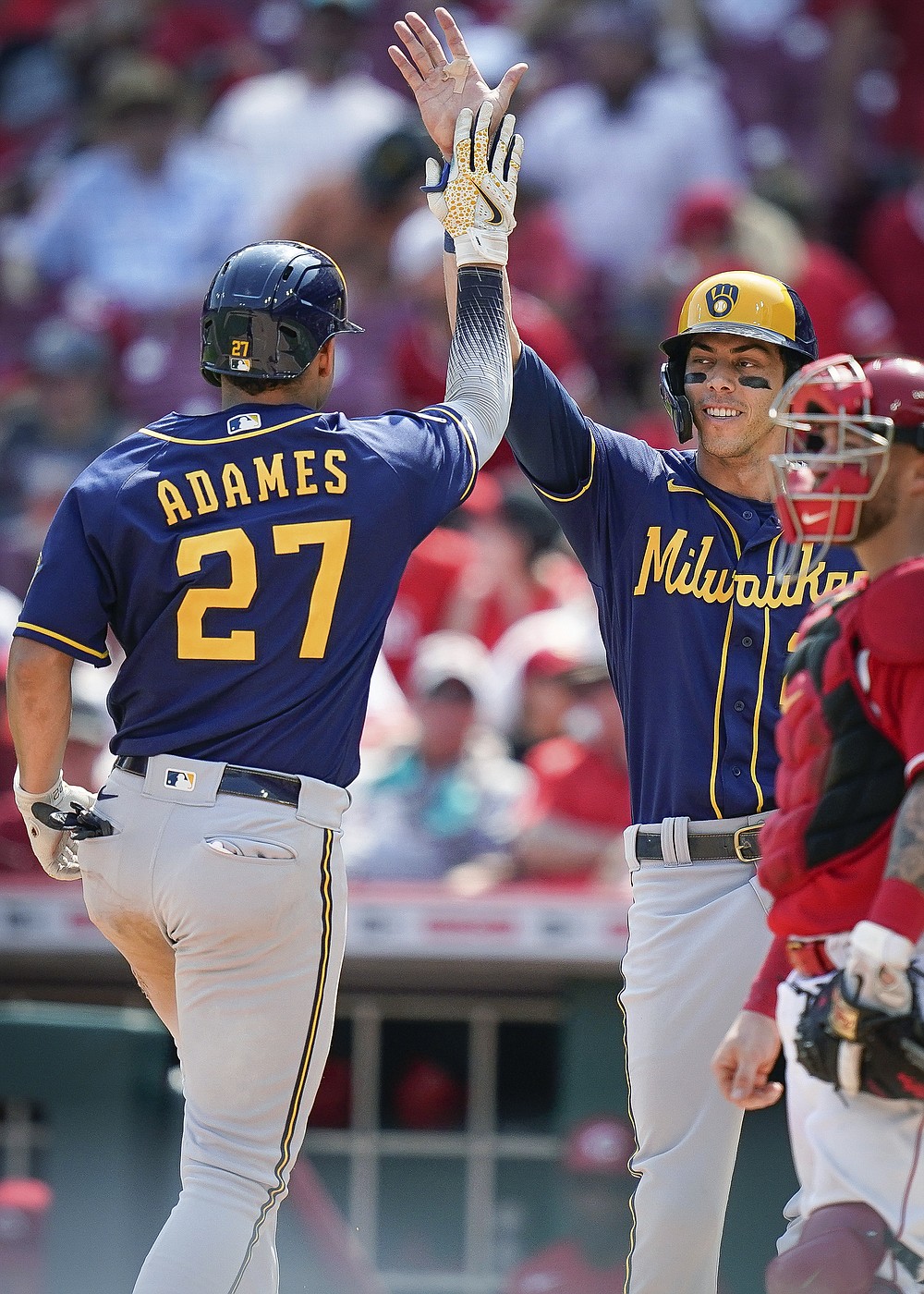 Milwaukee Brewers' Willy Adames (27) celebrates with Christian Yelich after hitting a home run during the ninth inning of the team's baseball game against the Cincinnati Reds in Cincinnati, Sunday, July 18, 2021. (AP Photo/Bryan Woolston) 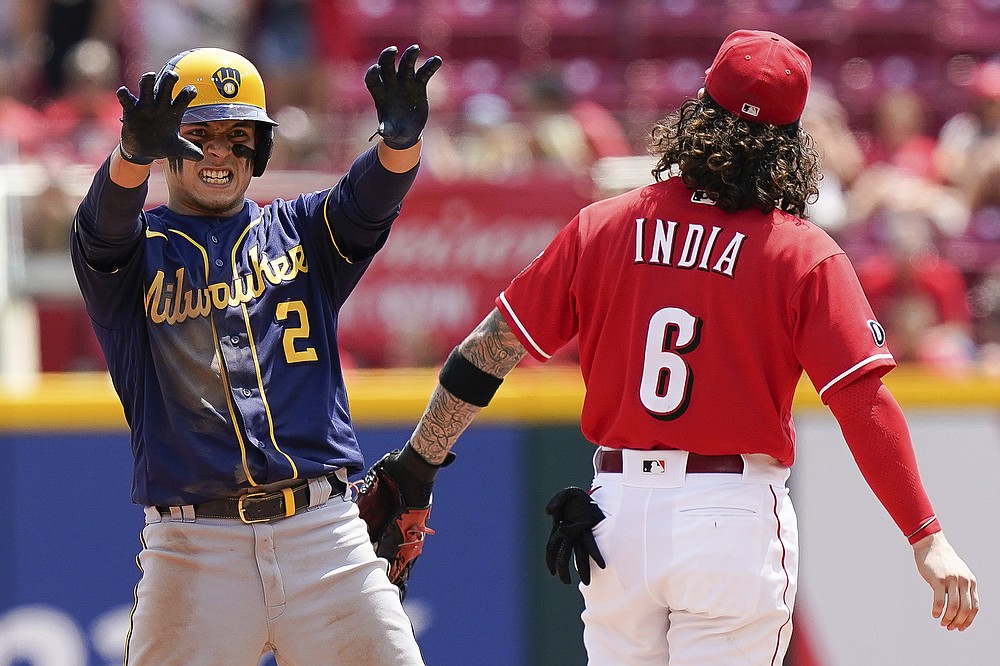 Milwaukee Brewers' Luis Urias (2) celebrates a play during the fifth inning of a baseball game against the Cincinnati Reds in Cincinnati, Sunday, July 18, 2021. (AP Photo/Bryan Woolston) 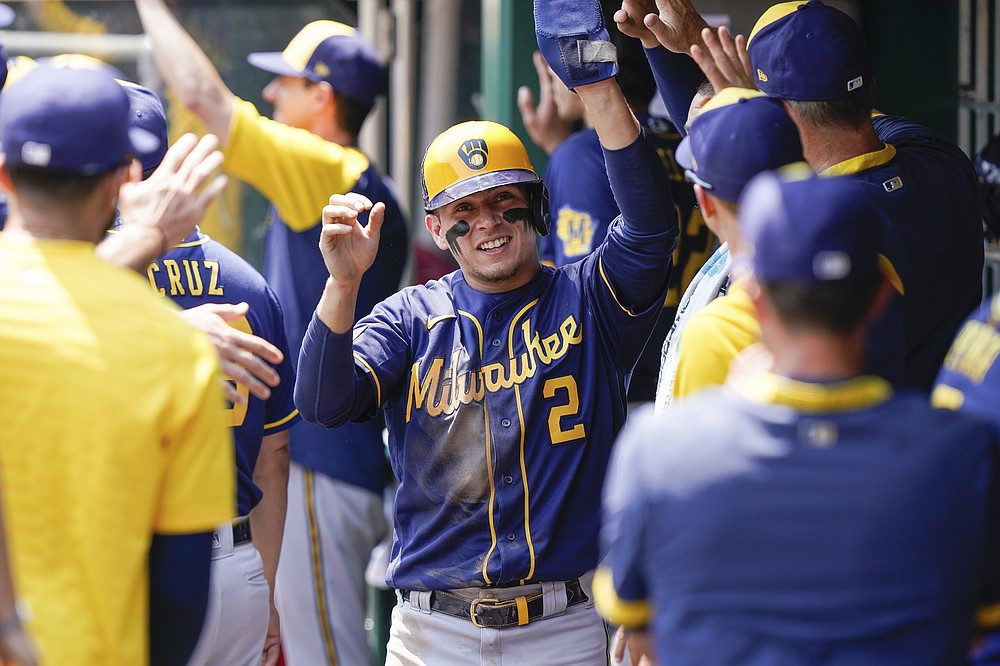 Milwaukee Brewers' Luis Urias (2) celebrates with teammates after scoring a run during the fifth inning of a baseball game against the Cincinnati Reds in Cincinnati, Sunday, July 18, 2021. (AP Photo/Bryan Woolston)