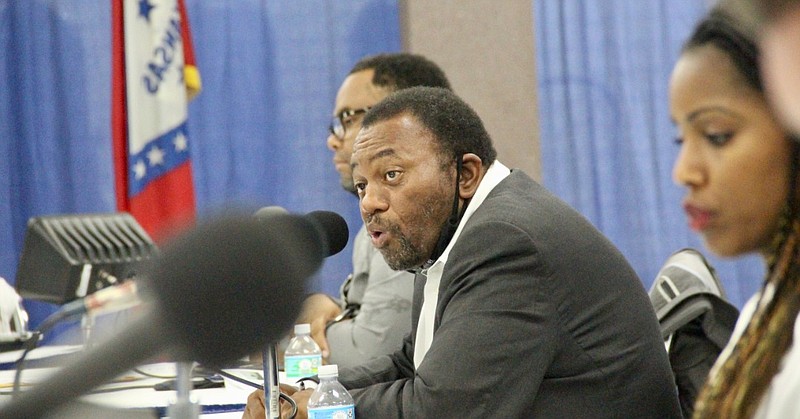 City council member Bruce Lockett, center, said the panel "jumped the gun" when it came to the proposals because the city doesn't have the money. (Pine Bluff Commercial/Eplunus Colvin)

For a meeting billed as the moment when the Pine Bluff City Council would decide which option to choose for giving police and fire employees raises, all proposals had to be shelved because of a lack of funding.

The council made a cautious decision Monday night to pull all the optional resolutions involving the proposed salary increases after discovering that each resolution would put the city over the actual amount of revenue Pine Bluff is projected to receive from Saracen Casino Resort.

In addition to $2.6 million that was already allocated and budgeted for the year, the city would still need at least an additional $700,000 to satisfy any of the raises on top of receiving a projected amount of $3.2 million from the casino.

According to Pine Bluff Finance Director Gina Devers, the city would need $3.9 million from the casino to accommodate the raises. Based on the average monthly revenue received so far from the casino of $279,000, Devers said the problem is the city is on track to receive only $3.2 million.

That proposal would have cost an additional $1.6 million on top of the available $2.6 million.

The last resolution, sponsored by Councilmember Lloyd Holcomb Jr., would have increased the base salary for the Fire Department by 5% in August with an additional 5% percent in January with the same for the police department.

"We're on track for $3.2 million but everything that we got going right now is $3.9 million," Brown said.

"We don't have any of these proposals that the projected revenue is going to break even or above," said Councilmember Bruce Lockett, who claimed adding the $2.6 million to any of the proposals would put the city in the red. "All of them are going to be in the negative."

Devers said they would have more months to study the figures next year to make a more accurate projection, but the city only had three months of casino revenue to look at.

It was unwise for the council to vote on resolutions when the city didn't have the money, Lockettt said, especially with a pending lawsuit against the county and a potential increase in employee insurance.

"What happens if the lawsuit we have pending with the county necessitates that we have to pay a quarter of a million to a half a million for jail space?" he asked. "Where will we get that money from?"

Devers said it would come from casino revenue as well.

"I would really like to table any increases until 2022 to give more time to look at alternatives to raises, fees and take care of the fire and police with bonuses," said Lockett, who added that he felt the city council had been premature in coming up with the proposals. "A bonus won't put us in a situation where we're obligated to pay a set amount and it gives a chance now through November, December to look at some creative ways to do increases."

Lockett said once the increases are given, the city has to sustain them.

Mayor Shirley Washington agreed and said she would also pull her resolution increasing the chief of police and fire chief salary, originally on the agenda to be discussed first but was asked by Alderman Ivan Whitfield to be moved to the end after discussing the other resolutions.

"We have to be very responsible when it comes down to our budgeting especially when depending on casino dollars because it's not fixed income," said Washington, who called the funding unstable. "We feel that whatever we do we have to be conservative."

Whitfield suggested another meeting be held as soon as possible to discuss the numbers and come up with a feasible solution. After the meeting, he said usually these things come through the Ways & Means Committee meeting and the budget could have been addressed then.

The council plans to have a special called planning meeting today to address the salary increases.