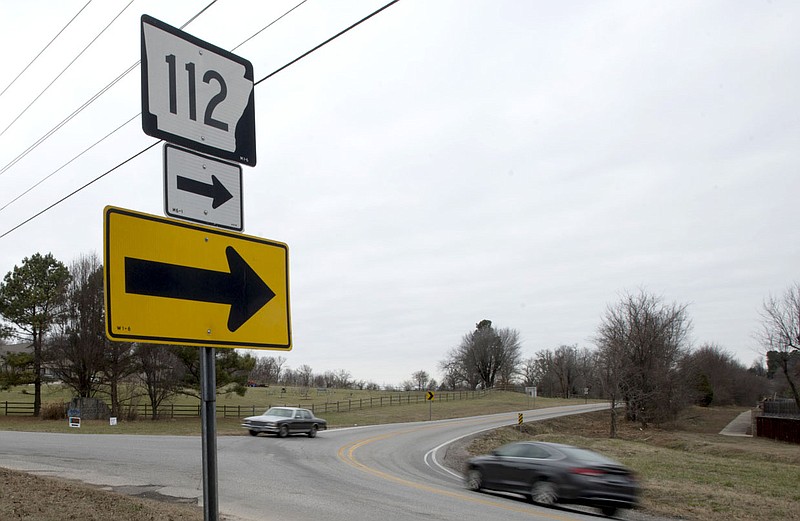 Cars drive by on Thursday, December 28, 2017 on the corner of AR-112 and Howard Nickell Road in Fayetteville. (NWA Democrat-Gazette/CHARLIE KAIJO)

The design for improvements and widening of Arkansas 112 to four lanes have changed since the Arkansas Department of Transportation first showed the plans to the public in December and residents are getting a look at them in a series of public input sessions this week.

"The purpose of this meeting is to allow the public an opportunity to view the modifications made to the design since the previous meeting as well as to provide comments," said Carla Simms, who hosted Monday's virtual meeting.

The first session looked at the portion of Arkansas 112 between U.S. 412 and the Springdale Northern Bypass. That section is 4.3 miles and will include a number of roundabouts and median breaks about every quarter mile, according to highway officials.

Highway department engineers made several design modifications after the December input session including increasing sidewalk width from 10 feet to 12 feet and moving that sidewalk to the east side of the road. The west side of the road will have 3 feet of green space and then a 5-foot sidewalk.

A roundabout at Barrington Road was moved to Sabatini Road but is still subject to change with the city of Tontitown favoring a less northerly location. A final decision will come after public comments are considered.

The final route through Elm Springs has yet to be determined and could largely bypass the city.

Most questions Monday revolved whether there will be a roundabout at Barrington or Sabatini and around property acquisition and compensating land owners for any land taken for the project.

For anyone who missed Monday's session, the meeting was recorded and will be available on the highway department's website to view.

Construction on the project is expected to begin in early 2024 and will likely take more than two years to complete.

The Arkansas Department of Transportation has scheduled two more online public involvement meetings this week to address portions of the road farther to the north. The online meetings will be from 5:30-6:30 p.m. today and Thursday.

The later sessions promise to be more contentious than Monday's meeting. The plans can be viewed at the Arkansas Department of Transportation's website prior to the upcoming meetings.

Today's session, Springdale Northern Bypass to West Wallis Road, has residents of Cave Springs concerned. In an email Mike Maloney, a spokesman for residents, said they have questions about what constitutes fair market value for their property and who who determines that; what the width of the road including the median will be; environmental issues, including blind cave fish; speed limits; and, displacing property owners, among others.

The Thursday session, West Wallis Road to Arkansas 12, is already drawing interest from concerned residents of several subdivisions in southwest Bentonville. The route could impact the St. Valery Downs and Lockmoor Club subdivisions or Chattin Valley subdivisions along with several schools, depending on the final route selected.

The primary purpose of the work is to allow the road to carry significant local and regional traffic, according to the planning documents. Arkansas 112 is the only major north/south route through the metro region west of Interstate 49, which makes it critical for regional mobility as the area continues to grow, according to the document.

The region's population is projected to be close to 1 million by 2045.

The Transportation Department unveiled its plans in December. About 200 residents participated in the December meeting. Typical input sessions in Northwest Arkansas might draw a couple dozen people.

The road would generally follow the current alignment except at Cave Springs, which could see a bypass around the west side of town or a split alignment through the middle of town. Most residents in December said they favored the bypass option rather than either of two proposed alignments through downtown that could affect historic buildings and businesses.

The bypass proposal would be the most expensive because several bridges would be required to bypass the city to the west, traversing a largely floodplain area and crossing Osage Creek twice. But, fewer people and structures would be adversely affected.

The online public meetings will consist of presenting and discussing the proposed design modifications. The meetings will be held from 5:30-6:30 p.m., and only project-specific material will be covered in each session. The online website will be available for viewing through Aug. 6 at https://www.ardot.gov/publicmeetings. Comments will be accepted until 4:30 p.m. Aug. 6. For additional questions, contact: Karla Simms Advanced Public Involvement Specialist, (501) 569-2949 or karla.sims@ardot.gov.