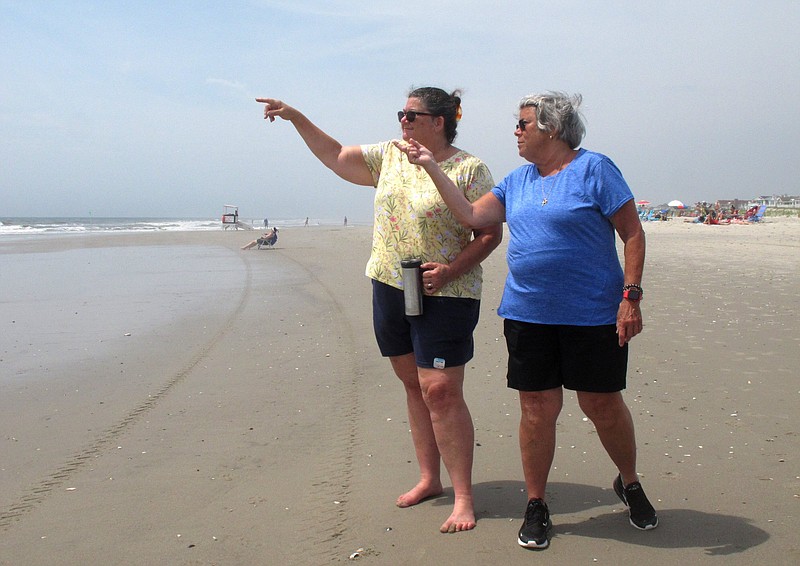 Suzanne Hornick, left, and Susan Cox, right, look out to sea from a beach in Ocean City N.J. on July 8, 2021 where power cables from an offshore wind farm are projected to come ashore. They are among opponents of offshore wind who question its impact on the ocean, the environment and the economy. (AP Photo/Wayne Parry)

OCEAN CITY, N.J. -- New Jersey is moving aggressively to become the leader in the fast-growing offshore wind energy industry on the East Coast, but not everyone is blown away by those ambitious plans.

While the state's Democratic political leadership is solidly behind a rapid build-out of wind energy projects off the coast -- it has set a goal of generating 100% of its energy from clean sources by 2050 -- opposition is growing among citizens groups. Even some green energy-loving environmentalists are wary of the pace and scope of the plans.

The most commonly voiced objections include the unknown effect hundreds or even thousands of wind turbines might have on the ocean, fears of higher electric bills as costs are passed on to consumers, and a sense that the entire undertaking is being rushed through with little understanding of what the consequences might be.

Recreational and commercial fishermen have long felt left out of the planning for offshore wind, much of which will take place in prime fishing grounds. Similar concerns have been voiced by offshore wind opponents in Massachusetts, France and South Korea, among other places.

Adding to the unhappiness is a bill passed by the state Legislature and awaiting action by New Jersey Gov. Phil Murphy that, aside from granting them a public hearing, would remove virtually all control from local communities over where and how the power lines come ashore.

"They're still learning about this and we're the guinea pigs," said Rick Bertsch, who is active with a group of Ocean City residents opposed to three offshore wind projects already approved off their city.

In a statment from Danish company Orsted, it noted that it is "fully committed to growing the New Jersey offshore wind industry sustainably. Our teams have held multiple open houses and are committed to meeting with stakeholders in the community to educate them on the countless economic, environmental and community benefits of offshore wind."

The company proclaimed it is committed to protecting the marine environment and already has altered the planned layout of its turbines in one project after input from fishing groups.

Most environmentalists and some business groups strongly support offshore wind as a clean, renewable power source as the nation and the world try to transition away from burning fossil fuels. They say the wind farms will generate power that would otherwise be generated by burning coal or natural gas, helping to address climate change -- and that the rapid pace of development is crucial to addressing climate change before it becomes irreversible.

Many of the opponents, particularly in flood-prone Ocean City, say they believe climate change is real and that a warming planet and rising seas are threats that must be addressed.

While many agree that continuing to burn fossil fuels will only make things worse, some opponents wish New Jersey would proceed more slowly and deliberately, learning as it goes.

Three projects capable of generating enough electricity to power 1.6 million homes have already been approved by state regulators -- and many more are on the way. New Jersey plans to solicit additional projects every two years until 2028.

There will be about 285 turbines built for those three projects, the state reported.

"Why push this through, trampling all over the rights and desires of the people, without fully hearing from all stakeholders, considering all the financial, ecological, socioeconomic consequences?" asked Suzanne Hornick, a leader of the Ocean City opposition. "It's going to be an industrial site out there."

She worries residential customers could pay much higher prices for electricity than they do now.

Most of Ocean City's City Council opposes the offshore wind projects, even as officials in many other communities embrace the technology as an environmental and economic boon. Last week, 110 elected officials from around the state signed a letter supporting what they call "responsible" offshore wind development.

One common criticism is visual pollution, the idea that the turbines will be visible from the shoreline and ruin pristine ocean views. Developers say the turbines, projected to be about 10 to 20 miles offshore, will be visible on the horizon under clear weather conditions, but less so during foggy or hazy conditions.

A group of residents, Go Green and Unseen, wants the turbines moved 35 miles offshore so they will not be visible from the shore.

While many environmental groups support offshore wind, that support is not universal, nor unqualified. Clean Ocean Action, New Jersey's leading ocean advocacy group, says it supports offshore wind, but wants to see a demonstration project first, to study and learn from the results.

"These first proposals off the Jersey Shore are massive and total over 1.16 million acres -- about the size of Grand Canyon National Park and a law is pending to block communities' concerns," said Cindy Zipf, the group's executive director.

"If we don't get this right, we may learn too late that the 'Great Offshore Wind Boom' of the 2020s accelerated the ecological collapse of this ocean realm, the billion-dollar economies it supports and its ability to help buffer climate change," she said. "To assuage the sins of our fossil fuel past, we must take care not to act recklessly, threatening the very goose that lays the golden eggs -- our vibrant, giving ocean."