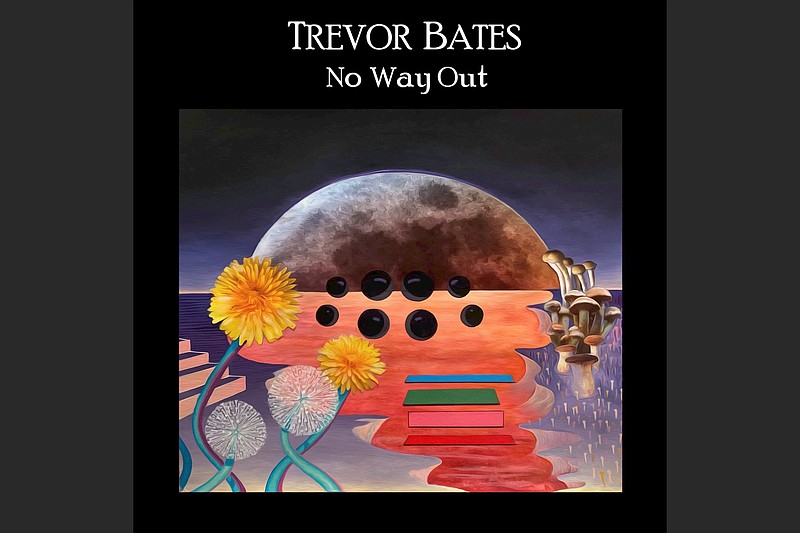 One of our favorite albums from 2020 was "First Animal" by Trevor Bates.

The Little Rock musician ticked off all the DIY rock 'n' roll boxes, delivering a slab of fuzzed-out punk that was something like Sebadoh crossed with Iggy and the Stooges. It is heavenly.

It's true, and it's great. "No Way Out" is a single track that spans nearly 20 minutes with multiple segments, mood shifts, drama and intricate musicianship. It's rock, jazz, theater and all the other prog trappings and tells the story — and in prog there's always a story — of an insect getting caught in a spider's web.

Find it at Bate's Bandcamp page, trevorbates.bandcamp.com/album/no-way-out, or the usual streaming outlets.

While the leap from the garage punk of "First Animal" to the grandiose "No Way Out" may seem jarring, Bates' background indicates that it's not that surprising.

His dad, Sam, was blasting prog rock when Bates was a kid.

"Prog and classic rock is what I heard growing up," he says. "It has this really strong connection to my dad. That's what I heard around the house — Kansas and Yes and Rush. That was his thing."

When Bates started making his own music, he gravitated toward the intricate, more-is-more prog approach.

"It wasn't until college that I cracked open stuff like Sebadoh and Dinosaur Jr and simpler bands and songs," he says.

But while those influences marked the more aggressive "First Animal," his natural instincts were still firmly rooted in prog rock, even if it wasn't that hip.

"It's not cool by any stretch," he says with a laugh. "It took a long time for me to come back and say, hey, this is part of my musical identity. I have some of these songs that I need to get out of my system."

In that spirit, we talked with Bates about the Top 5 prog rock albums that had the biggest influence on him, which we present in a list that has been edited for clarity and length:

1. "Masque" — Kansas: "My dad's favorite band. I grew up listening to 'Masque.' The first two songs are really cheesy and you've got to just skip those, but the rest of the album is pretty highbrow prog. Starting with 'Icarus' all the way through the last song, 'The Pinnacle,' which is a 10-minute epic, Kansas and 'Masque' really informed my prog outlook for the rest of my life."

2. "The Power and the Glory" — Gentle Giant: "Another band my dad introduced me to. This is pretty much as technical and pretentious as it gets. They all play multiple instruments. They have these really complex vocals that they are known for and have been imitated by many prog bands. There are some super tasty parts. They were a huge touchstone for me. 'Valedictory' is super groovy but also really weird."

3. "A Wizard/A True Star" — Todd Rundgren: "I got turned onto this in college and it is kind of the first album that was my prog music and not my dad's. It's got more pop and psychedelic elements. I think [Rundgren] had just experimented with a bunch of psychedelic drugs but was making super complex music. The whole first side of the album all flows like one long song. One of my all-time favorite albums."

4. "Flying Teapot" — Gong: "They were part of the Canterbury scene with bands like Soft Machine; really jazzy prog, a lot of horns, abstract drum parts. The thing about Gong that sets them apart is that they still retain this psychedelic feel. There's this extended experimentation and they will break into a jazz-rock fusion."

5. "Love's Forever Fool" — Daniel Romano: "He's Canadian and very prolific. This is one of the albums he put out last year and it is a 22-minute single, very similar to 'No Way Out'. It's got high energy parts, very subdued introspective, spacey parts and there's a theme running through it. I listened to this a ton last year while recording 'First Animal' and this was a huge inspiration for me to revisit prog. I was like, man, this is cool. This has a connection to the prog bands my dad liked but also the psychedelic stuff I'm into."