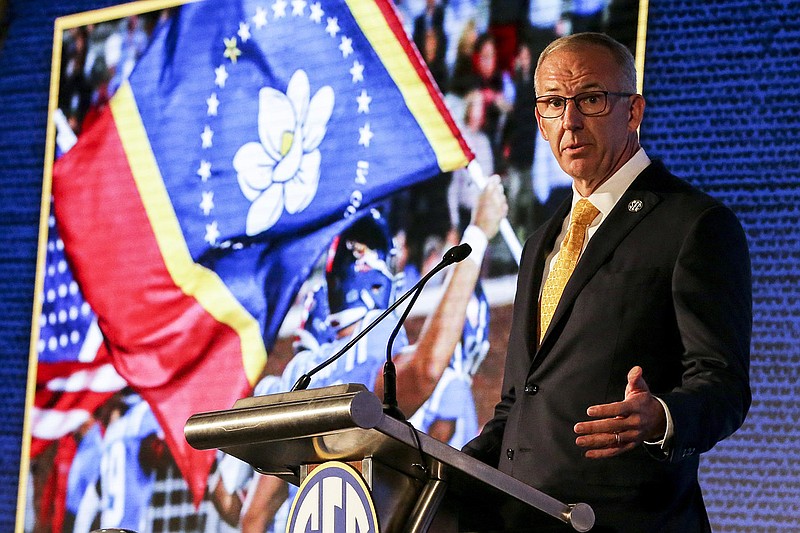 HOOVER, Ala. -- SEC Commissioner Greg Sankey spent a portion of his time at the podium to kick off SEC Media Days touting the need for more people to take covid-19 vaccinations.

"Let me be clear to our fans, to our coaches, to our staff members, and to our student-athletes: covid-19 vaccines are widely available," Sankey said. "They've proven to be highly effective. And when people are fully vaccinated, we all have the ability to avoid serious health risks, reduce the virus' spread, and maximize our chances of returning to a normal college football experience and to normal life."

Arkansas and fellow SEC footprint states Florida, Louisiana and Missouri were identified last week as four of the top five states in rates of covid-19 cases.

"With six weeks to go before kickoff, now is the time to seek that full vaccination," Sankey said. "And we know nothing is perfect, but the availability and the efficacy of the covid-19 vaccines are an important and incredible product of science.

"It's not a political football, and we need to do our part to support a healthy society because, as we look back, the potential absence of college sports last year caused us to think about not losing sight of the lifelong experiences, the laboratory of learning that takes place, and the educational benefits that accrue to the people who participate on our teams."

As Sankey spoke, a video screen behind him carried the message "The SEC backs the vax."

Sankey said six of the 14 SEC schools have reached the 80% rate of vaccinations in their football programs. A source with knowledge of the details said the University of Arkansas was one of those six programs.

SEC Commissioner Greg Sankey made it clear that forfeits can be a consequence this season if league schools do not meet the roster thresholds of healthy players due to coronavirus quarantining or tracing.

"We still have roster minimums that exist, just like last year," Sankey said. "What I've identified for consideration among our membership is we remove those roster minimums and you're expected to play as scheduled. That means your team needs to be healthy to compete, and if not, that game won't be rescheduled.

"And thus, to dispose of the game, the 'forfeit' word comes up at this point. That's not a policy, and what you see are the bookends now for decision-making. We've not built in the kind of time we did last year, particularly at the end of the season, to accommodate disruption.

"And unless we're going to do that, our teams are going to have to be fully prepared to play their season as scheduled, which is why embedded in my remarks is the vaccination motivation."

The Arkansas football media guide is out in digital form at SEC Media Days.

LSU left tackle Austin Deculus said new offensive line coach Brad Davis, who Coach Ed Orgeron hired away from Arkansas on June 3, would be a great fit for the Tigers.

"It's always sad to see your coaches leave, but Coach Davis is going to do great things for us," Deculus said. With Coach Davis, we're going to get a whole new aspect, a whole new point of playing the offensive line that's going to be very beneficial for us.

LSU's second game against McNeese State will be more than just another in-state contest for Coach Ed Orgeron.

His Tigers will be up against an offense led by senior quarterback Cody Orgeron, a 6-1, 184-pounder who is also the coach's son.

"We're going to compete, then shake hands and hug after the game. That's just the way it's going to be."

Cody Orgeron has passed for 4,336 yards and 35 touchdowns in his career.

Kevin Trainor, Arkansas' associate athletic director for public relations, is serving as moderator for coaches and players in the main media room for the 10th year.

"It's a great feeling to be back and see everyone in the SEC and to be here representing the University of Arkansas," said Trainor, who also serves as moderator of the coaches' news conferences at the SEC Championship Game. "It's going to be exciting to see Coach [Sam] Pittman later in the week."

Pittman will speak to the media on Thursday along with linebacker Grant Morgan and offensive tackle Myron Cunningham.

Trainor is joined at SEC Media Days by his daughter, Emma, who is volunteering at the event. She's a student at Oklahoma State, where she works in the media relations office.

"To have Emma here and experiencing this with me means a lot," Trainor said. "It's great for our family."

Florida and Central Florida are nearing an agreement to play a three-game series, with the Gators hosting in 2024 and 2033 and the Knights hosting in 2030, according to reports by the Orlando Sentinel.

Florida players were asked about the series, with the prompt being that Central Florida has been clamoring to take on the in-state power.

"I think it'll be good to show them who runs the state of Florida," Gators defensive lineman Zachary Carter said.

Asked on Monday what he might have learned through the ongoing Title IX investigations at LSU, which involve sexual misconduct complaints against former players, LSU Coach Ed Orgeron did not take the bait.

"That's something I'm not going to comment on at all," Orgeron said. "That's an ongoing investigation. Thanks for asking though."

Florida Coach Dan Mullen's team will not play a home conference game in the Swamp after Oct. 9, partly due to its role as host for the annual neutral-site game against Georgia in Jacksonville, Fla.

The Gators host Alabama on Sept. 16 for the Tide's first visit to the Swamp in a decade.

Mullen suggested some scheduling ideas based on his team's weird schedule.

"I don't want to get the commissioner in trouble here, but I'd love us to maybe do away with the permanent crossover team so you get these type of games more often," he said in reference to the long time between home games vs. Alabama. "I think for the players, for the fan bases, I really think it's exciting to see some more of maybe mixing up the teams from the West and playing two different teams each year instead of a permanent crossover."

Mullen had another idea for teams that play conference games at neutral sites, as Arkansas and Texas A&m have done for many years in Arlington, Texas.

"I mean, I don't know how you'd ever do it, but if the league ever wanted to go to a nine-game schedule -- which I don't think anybody's jumping up and down about right now -- but I guess what you do is play four home, four away and a neutral site game, and you could find different ways or matchups that everybody got to do that," Mullen said. "That would be one interesting way to do it. Then you have the same number of home and away games."

"Ever since I got into coaching -- really you go back to when I was playing high school football, growing up in Blacksburg, Va., there were kids I played with who said, 'The only reason you're the starting whatever on the football team or the baseball team is because your dad's the head coach at Virginia Tech,' " he said on Monday. "Then I got into coaching. Whether it's right or wrong, I always tried to keep that chip on my shoulder or edge about myself to prove myself for sure."

Beamer's rise up the coaching ranks, starting as a graduate assistant at Georgia Tech in 2000, has included stops at Tennessee, Mississippi State, South Carolina, Virginia Tech, Georgia and Oklahoma.

• Paul Finebaum agreed to a multiyear extension with the SEC Network and ESPN Radio, ESPN announced on Monday. Finebaum, 65, joined ESPN in 2013 after nearly 20 years broadcasting his radio show.

• SEC schools participated in 69 of 71 football games scheduled last season. The only non-played league games were Georgia vs. Vanderbilt, which could have allowed the Bulldogs to tie Florida for the SEC East title at 8-2, and Mississippi State vs. Texas A&M.