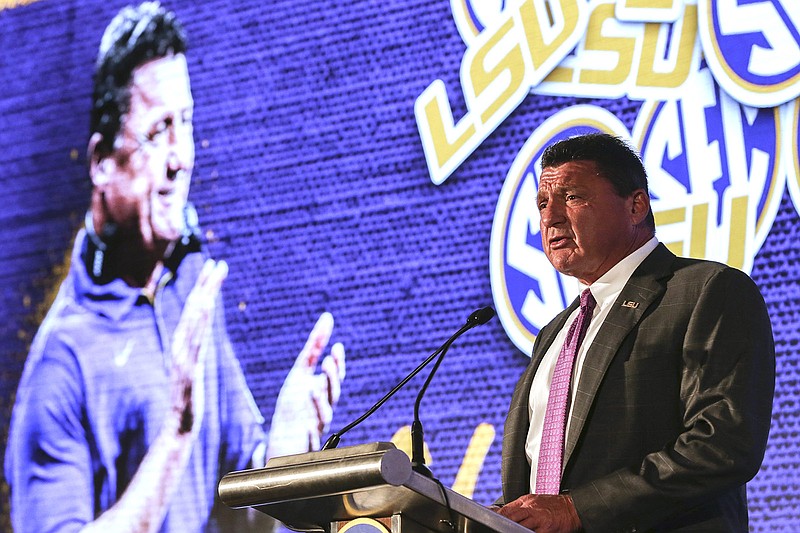 HOOVER, Ala. -- LSU Coach Ed Orgeron overhauled his coaching staff after the Tigers fell from winning the 2019 national championship to a 5-5 finish last season.

"Brad Davis is a guy from Baton Rouge, a tremendous recruiter, up-and-coming offensive line coach," Orgeron said Monday at SEC Media Days. "You always have a group of coaches on a list in case something happens. Something did happen and he became available, and we're very happy to have him. He's happy to be home in Baton Rouge."

LSU has two new coordinators in Jake Peetz on offense and Daronte Jones on defense to replace Bo Pelini and Steve Ensminger.

Pelini resigned under pressure after LSU finished 13th in the SEC in total defense (492.0 yards per game) and 14th in pass defense efficiency (323.0 yards).

Peetz comes from the NFL's Carolina Panthers, where he was the quarterbacks coach and worked with offensive coordinator Joe Brady, the Broyles Award winner in 2019 as the nation's top assistant when he was LSU's passing game coordinator.

Jones previously was an NFL assistant coach, most recently with the Minnesota Vikings as defensive backs coach. He coached at Wisconsin with Dave Aranda, LSU's defensive coordinator in 2019 who left to become Baylor's coach.

"Me relying on former coordinators that I trust was very, very instrumental in me hiring both of our coordinators," Orgeron said. "In fact, that's about 80% of it, to be honest with you."

Other first-year assistant coaches for the Tigers are Andre Carter (defensive line) from the NFL's New York Jets; Blake Baker (linebackers) from the University of Miami; and DJ Mangas (passing game coordinator), who worked with Peetz at Carolina and was an analyst at LSU in 2019.

"Our coaches didn't know this, but when I was interviewing them, I was pretending I was one of our players," Orgeron said. "I wanted to see how well they would communicate to our players.

"Coaches are going to know a lot of football, but it's how much that they can get to our players and how much our players will know."

Orgeron said his assessment is that the new coaches relate well to the players.

"They average 20 years younger than the coaches I had on the staff," Orgeron said. "Every one of these coaches made an A-plus in communication with our players."

"I think it's great to bring in young coaches," Deculus said. "I'm not trying to point fingers at anyone, but whenever you have young guys, they're going to bring a little more energy into the room."

"Coach Jones is upbeat, very energized," Stingley said. "We feed off that. We believe in him, and he believes in us."

"We've got a battle at quarterback," Orgeron said. "I think it's healthy for a football team. I believe in both quarterbacks."

Stingley said the Tigers gained some momentum by winning their last two games, but they are motivated for redemption after what overall was a disappointing season.

"We looked much better in the spring than we showed last season, and now we've got fall camp coming up," Stingley said. "We've got to keep building on what we've got going, and I think we're going to be pretty good."

Orgeron is feeling better, too, after a 2020 filled with players opting out before, in the middle and late in the season.

"Obviously, you come off the 2019 season, you're feeling good, you had a great season, and all of a sudden, stuff hits," Orgeron said. "But that's life.

"I think it shows, when you go to Florida and you're a 27-point underdog, your back's against the wall, you have a freshman quarterback, you beat them in The Swamp. You beat a great Ole Miss team.

"Then you have the No. 3 recruiting class [nationally], and 19 of your 22 starters decide to come back."

Orgeron said the Tigers have to eliminate big plays their defense allowed last season starting with a 43-34 loss to Mississippi State in the opener.

"Too many explosive plays, too many missed assignments," he said. "Too many busts. Too many receivers running down the field free."

LSU played a lot of man-to-man coverage, Orgeron said, and at times the scheme was too complicated.

On offense Orgeron said LSU will return to the Spread scheme that helped make quarterback Joe Burrow the Heisman Trophy winner and No. 1 pick in the NFL Draft by the Cincinnati Bengals.

Orgeron said he's glad to hear LSU players say they're excited about the new additions to the staff.

"That's the reason I hired those guys, and I did my research," Orgeron said. "I called people that knew them. I wanted to know how they interacted with the players.

"I called some of the ex-players that they coached, I said, 'Tell me how he is on a daily basis.' Everybody can be one way in an interview, but I want to know how they're going to be every day.

"They match everything that the ex-players told me, the ex-coaches told me, and the knowledge that they have."

Peetz and Jones are first-team coordinators.

"They're tremendous leaders," Orgeron said. "They're in the office early in the morning. They're very well organized.

"Sometimes, when it's your first time as a coordinator, you don't know how well organized that you have to be or the work you have to put in. These guys are A-plus in that area."