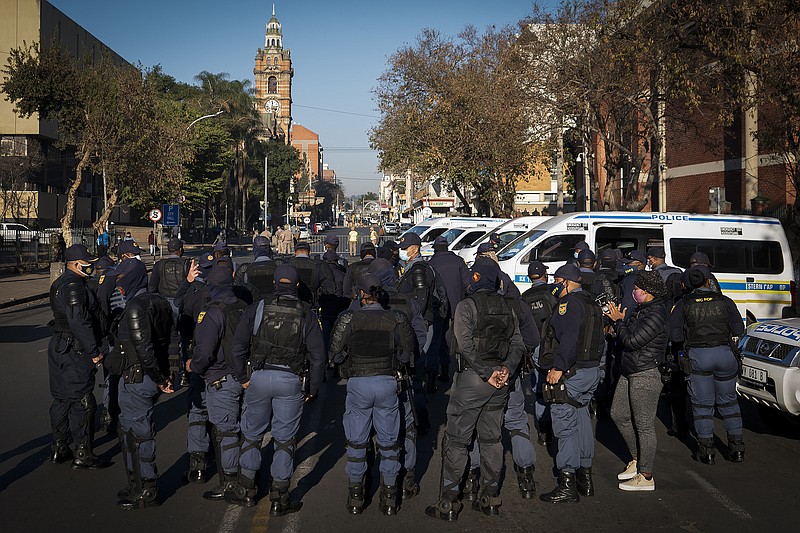 Members of the South African Police Services on patrol outside the High Court in Pietermaritzburg, South Africa, Monday July 19, 2021, where the corruption trial of former South African President Jacob Zuma resumed. The trial continued more than a week after Zuma's imprisonment for contempt of court in a separate case set off rioting. (AP Photo/Shiraaz Mohamed)

JOHANNESBURG -- The corruption trial of former South African President Jacob Zuma resumed Monday, more than a week after his imprisonment for contempt of court in a separate case that set off rioting in parts of the country.

Zuma is accused of taking bribes from the French arms manufacturer Thales related to the country's controversial 1999 arms procurement contracts. The trial is taking place virtually, but his lawyers are trying to postpone the proceedings so he can appear in court.

He appeared on camera from the Estcourt Correctional Center in KwaZulu-Natal, the first time he has been seen publicly since he started serving his sentence July 8.

Zuma's lawyers argued the case should be delayed until he can attend the trial in Pietermaritzburg, the provincial capital. His lawyers said that because he is only able to attend the trial online, Zuma is being denied his right to consult with his legal team.

The state has characterized the claim as another attempt to avoid answering serious allegations. The court is expected to rule on the postponement request today.

The former president's imprisonment triggered protests that escalated into widespread unrest in KwaZulu-Natal, his home province, and in Gauteng, the province that includes Johannesburg, South Africa's largest city. Zuma's supporters forced the closure of strategic highways and rioters ransacked malls and shopping centers in poor areas.

In KwaZulu-Natal, warehouses and factories were looted and then burned. At least 215 people died in the rioting, many of them crushed during rampages in shops.

More than 2,500 people have been arrested on theft and vandalism charges. Order was restored following the deployment of 2,500 army troops to assist police.

At the time he is alleged to have received the bribes, Zuma was a high-ranking official in the ruling African National Congress party and a provincial minister in KwaZulu-Natal.

He is alleged to have received the bribes through his former financial adviser, Schabir Shaik, who was convicted on related charges in 2005, sentenced to prison and later released on medical parole. Zuma's lawyers are also expected to press his application for the lead prosecutor in the case, Billy Downer, to recuse himself from the state's legal team, arguing that he is biased.

The corruption case is separate from Zuma's contempt of court conviction. He had defied court orders to testify before a state inquest into allegations of corruption during his 2009-18 presidency.

The judicial inquest has heard damning testimony of widespread corruption during his administration.

The Constitutional Court is considering his request to have his 15-month contempt of court sentence rescinded. Zuma's lawyers have argued that the court made errors when convicting and sentencing him.

Assessing the damage done to South Africa's economy by the unrest, President Cyril Ramaphosa said Monday that the nation has already begun recovering from the violence.

"But we are not only rebuilding our country after the destruction of the past week; we are rebuilding after the devastation of decades of dispossession and exploitation," Ramaphosa wrote in his weekly letter to the nation.

"We need to fundamentally transform our economy and our society, deepening our efforts to create employment, lift millions out of poverty and ensure that the country's wealth is shared among all its people," he said. "The events of the last week are a stark reminder of how deep the problems are and how far we still have to go. These events must propel us to act with greater purpose and speed."

Ramaphosa also reiterated that the violence was not spontaneous.

"Those who lit the tinderbox of this unrest hoped to mobilize our people by exploiting their conditions of hardship. They were counting on citizens falling for crude propaganda designed to turn them not just against the state, but against each other," the South African leader said. "What they were not counting on was the enduring ability of South Africans to unite in the face of a common threat." 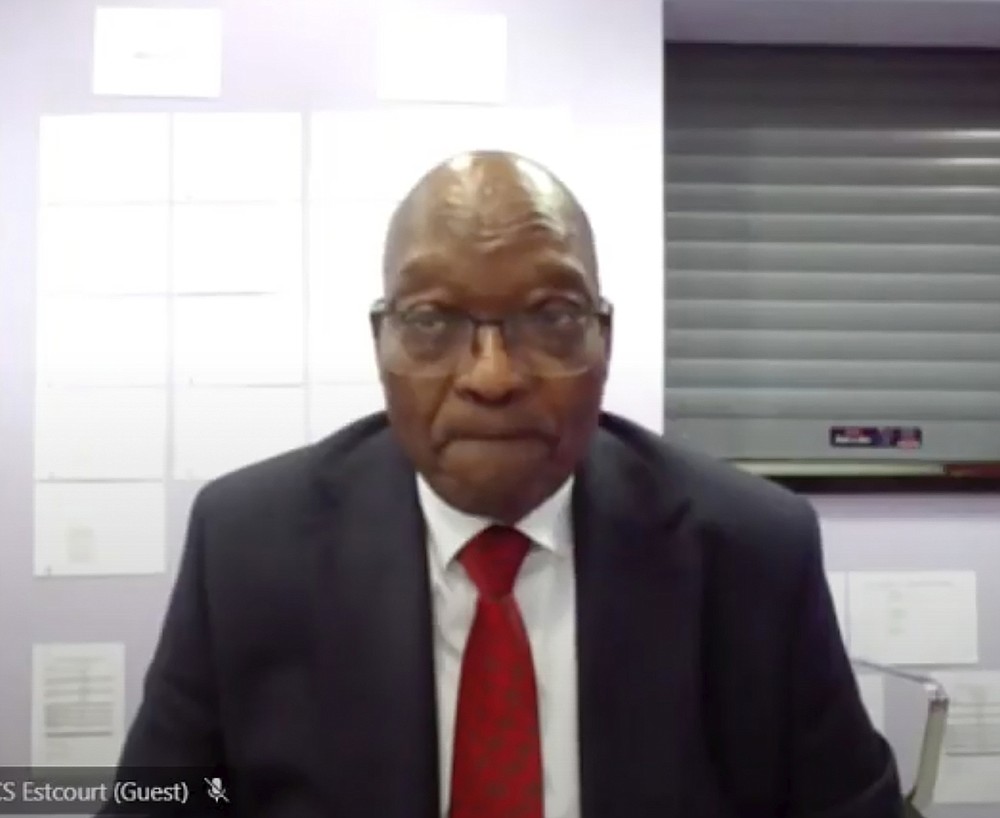 In this Frame grab former South Africa President Jacob Zuma, appears on a screen virtually from the correctional service facility Estcourt, in Pietermaritzburg, South Africa, Monday July 19, 2021, where his corruption trial resumes. The trial continued more than a week after Zuma's imprisonment for contempt of court in a separate case set off rioting. (South Africa Judiciary via AP)