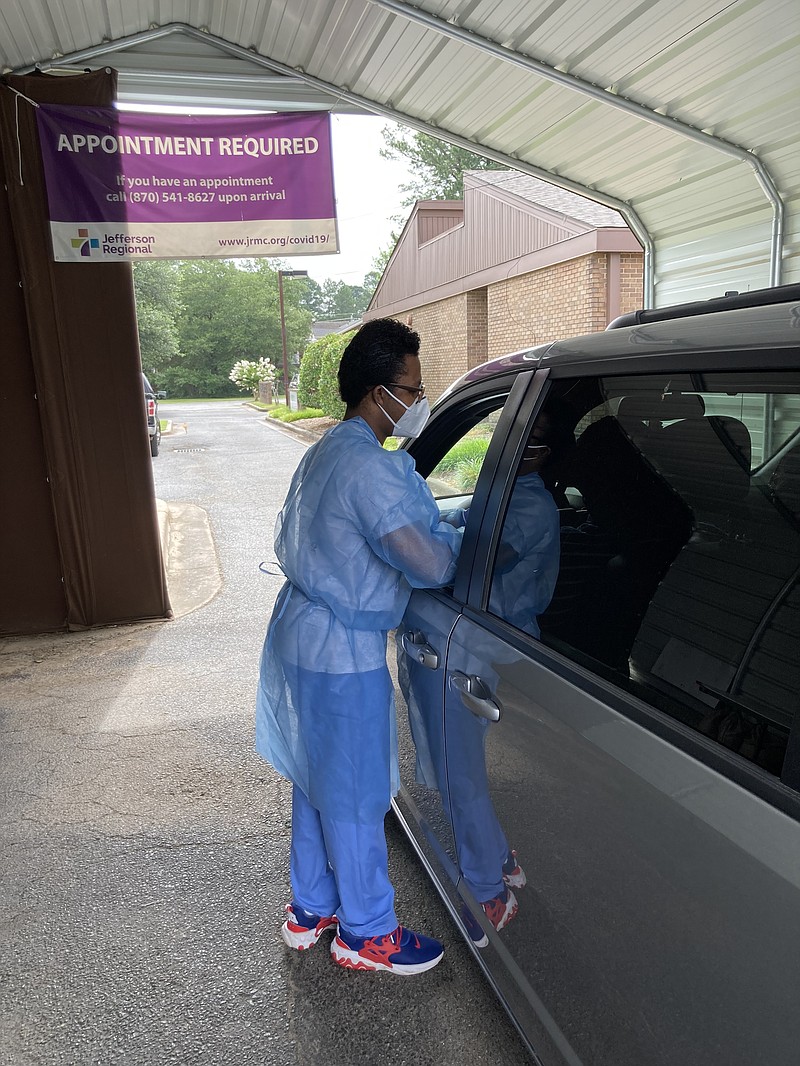 There were as many covid patients in Jefferson Regional hospital Monday as there were when the pandemic patient numbers were at their peak, officials said.

And a mask mandate in Jefferson County buildings could be put into place again if the numbers of new cases continue to rise, the county judge said.

Wendy Talbot, chief experience officer with the hospital, said there were 27 patients in the hospital Monday morning, a number that was equal to a high of 27 or 28 patients who were in the hospital around the first of the year when cases were at their highest.

The spike in numbers corresponds to a sharp increase in statewide covid numbers. Last week, new patient numbers were close to a thousand and higher each day with one day, Tuesday, hitting 1,476, the highest one-day increase in five months. Hospitalizations across the state were up as well.

Jefferson County Judge Gerald Robinson said a few weeks ago that if covid numbers continued to rise, he would consider reinstituting a mask mandate inside all county buildings. Asked on Monday if he was nearer to a decision, Robinson said he had tentatively set Aug. 1 as a time when he would make a call on the subject.

Robinson said he was encouraging all county employees to get vaccinated. He said he has never stopped wearing a mask when he goes out, and even now, he encourages his employees to wear masks in the county courthouse if they have traveled outside of their normal surroundings and there's a chance they could have been exposed to the coronavirus.

The spike in statewide cases and in cases all across the country has been attributed to the delta variant of the virus, which is much more contagious than those that killed more than 600,000 people in the United States. The variant is so contagious that it is infecting people who have been vaccinated, although the vaccination has minimized those patients' symptoms.

Of those in the hospital, almost 90% have not been vaccinated, Talbot said.

"Basically, what we are seeing is that the numbers are going up, which we don't like," Talbot said.

Talbot said some hospital administrators and health care professionals who have been vaccinated have tested positive for the virus. She said most hospital employees have gotten the vaccine, and hospital officials are encouraging others to step up and get vaccinated. But whether someone has or hasn't had a vaccine, protective equipment is required.

"If you're in this building, you're wearing a mask," she said.

Other numbers related to covid are also increasing, Talbot said as she looked at a schedule for appointments for giving people the vaccine, noting that slots are quickly filling up.

The same is true for covid tests, which are being done at the Urgent Care clinic on 42nd Avenue or in the Emergency Room. Just a couple of weeks ago, there was plenty of availability for testing, but now cars are backed up with people wanting to get tested, a situation that hasn't existed for many months.

Talbot said there is no out-of-pocket expense for getting vaccinated, and even if people are short on documentation, the hospital still wants to give them the vaccine.

"We want all people to get these vaccines," she said, "because that is protection."

"We're not saying you won't get covid," Talbot said. "We're saying that if you get the vaccine, the actual impact of the virus is much less and there's a smaller risk if you have been vaccinated and a decreasing chance of being hospitalized."

Talbot said hospital officials are eager to get younger people vaccinated. The Pfizer vaccine can be given to children 12 and older, and the hospital has used that vaccine when holding clinics at local schools.

"At Watson Chapel, we had a clinic and had a great turnout there," she said. "We're doing whatever we can to get these students vaccinated. We're already seeing a spike up, and we don't want to see that happen when school starts."

Jefferson County Sheriff Lafayette Wood Jr. said his protocol has not changed at the jail. Inmates are isolated for 12 to 14 days upon coming into the jail and then are moved into the general population once officials know the inmates are free of covid.

"We're continuing to do that," Woods said. "This is one of the safest places they could be. And we continue to sanitize the building on a weekly basis."

Woods bristled at a new state law that does not include jails in the excepted areas where masks could be mandated.

"That poses a bit of a challenge for us," Woods said. "It's quite ridiculous to me for them not to have included jails."

The situation has not been a problem yet, he said. The jail only allows video visitation between family members and inmates, and attorneys and members of the clergy who need to talk to an inmate do so through a live-stream service.

Mayor Shirley Washington, who has previously ordered masks to be worn in city buildings, said she was monitoring the situation, which she found "concerning."

"Based on legislation signed by the governor in April, which was set to take effect this month, the city of Pine Bluff does not have the legal authority to enact and enforce a city-wide mask mandate," Washington said. "However, we will continue to implement mask safeguards in all city buildings, and we strongly advise private businesses and organizations to implement safeguards in their facilities. Our focus has been on encouraging the public to observe health guidelines and get vaccinated."

Washington also referenced a $1.2 million grant the city received from the U.S. Department of Health and Human Services to expand covid-mitigation efforts.

"As part of this grant, we will be engaging with minorities and vulnerable populations who have been hesitant to get vaccinated and adhere to health guidelines, and we will be sharing information to dispel myths and address concerns about the virus," the mayor said. "Our hope is that this will build upon our current efforts, and give people the information they need to protect and save their lives."