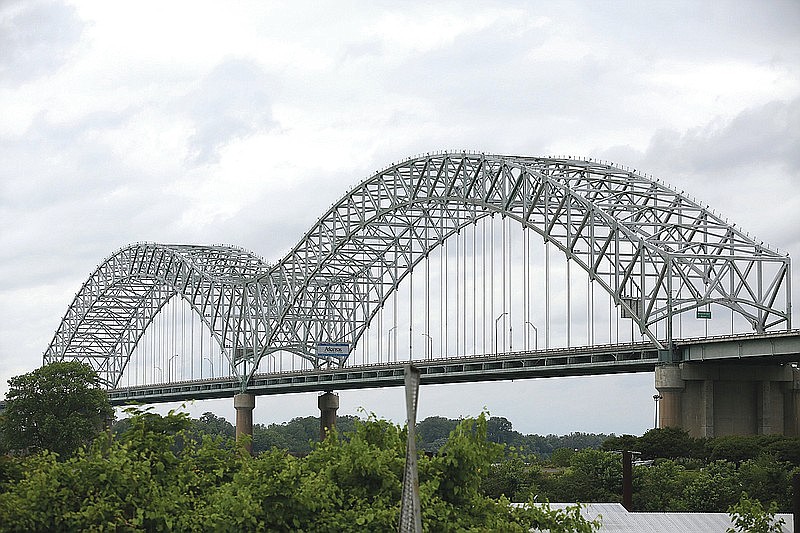 Workers at W&W/AFCO Steel in Little Rock wrapped up welding work Tuesday on three more metal plates that were expected to be loaded onto a flat-bed trailer this morning to be hauled up Interstate 40 for use in the final repairs of the Hernando de Soto Bridge.

All of the plates were from a load originally destined for the new Interstate 30 bridge across the Arkansas River at Little Rock, which is part of the $1 billion 30 Crossing project. W&W/AFCO Steel also is the fabricator for that project.

The plates were forged in steel production plants in Indiana and Ohio.

The process at W&W/AFCO Steel begins at the detail shop where a Messer Cutting System, which is computerized numerical control routers that can automatically cut steel and drill precise holes. It takes the machine about 30 seconds to drill a hole through the plate, which is 2¼-inches thick.

Once the plates are cut and the holes drilled, the splice plates and fill plates are pressed together and their holes lined up at the fabrication facility.

[Video not showing up above? Click here to watch » https://www.youtube.com/watch?v=cueLnEpvm50]

By Tuesday, a coat of primer was already on the plates.

All of the work in Little Rock was being performed under supervision of Ronnie Eagle, who manages bridge operations in Arkansas for W&W/AFCO Steel.

"It gives us pride to be a part of something like this -- to get that bridge back open," Eagle said above the din of the fabrication plant floor.

The bridge has been closed since May 11 when a crack was discovered in a section critical to its stability.

The plates are among a total of about 100 tons of fabricated steel that W&W/AFCO is providing for Phase 2 and Phase 3 repairs of the Mississippi River crossing that connects Arkansas and Tennessee. It also is a key component of a major freight corridor that has cost the trucking industry millions of dollars in delays and longer drives. Traffic has been diverted to the Memphis and Arkansas Bridge, which is 3 miles to the south on Interstate 55.

The first phase of the repairs was to stabilize the bridge for workers, inspectors and equipment to safely get on it to make permanent repairs. The second phase is the permanent repairs, and the third phase involves areas of concern discovered in an intensive inspection of the entire bridge. No additional cracks have been found.

The plates are called splice plates. Each one of the three on which work was performed Tuesday were about 14 feet long and 32 inches wide. Each also was fitted with a slightly smaller fill plate, according to the specifications and shop drawings that guided the welders' work Tuesday.

Gallery: Steel Plates for I-40 Bridge

Will Cranston, who has worked nearly 40 years at W&W/AFCO, consulted the shop drawings and then, with a measuring tape, a straight edge and pencil, marked where smaller plates would go to keep the plates together until they were bolted to the bridge.

Pascual was joined by Ricky Waters and Robert West in using a pneumatic-powered grinder to remove the primer from the marked area of the splice plates and fill plates. Pascual then used another power tool to clean the areas where the small plates will be attached. Cranston came behind them to preheat the sanded areas as well as the small plates.

"All the guys right here on the floor are skilled craftsmen," Eagle said.

A lift stationed in the roof of the cavernous building was moved into position to pick up each plate and stand it on its side while Cranston welded the small plates that would hold the splice plate and fill plate together, four apiece for each of the three plate assemblies.

W&W/AFCO is to make at least two other plate deliveries this week as round-the-clock work resumed on the bridge, according to the Tennessee Department of Transportation.