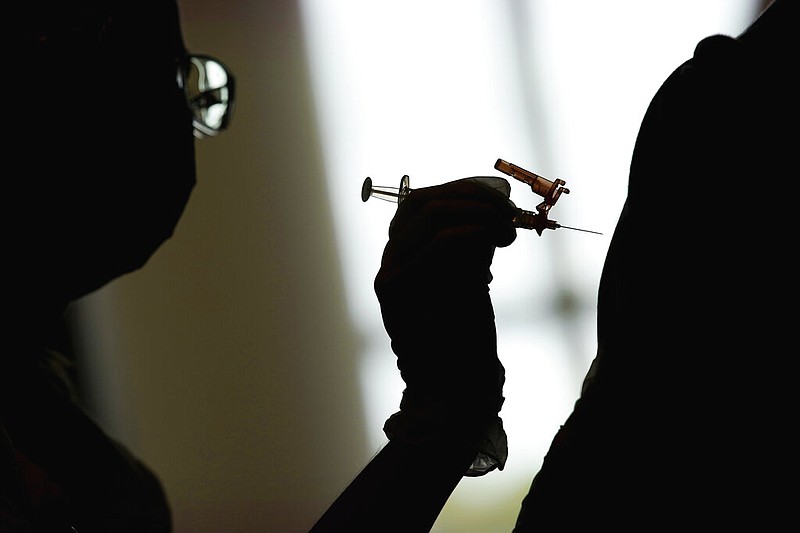 FILE - In this April 26, 2021 file photo, a nursing student administers the Moderna covid-19 vaccine at a vaccination center at UNLV, in Las Vegas. (AP/John Locher, File)

WASHINGTON — Lagging vaccination rates among nursing home staff are being linked to a national increase in covid-19 infections and deaths at senior facilities in July, and are at the center of a federal investigation in a hard-hit Colorado location where disease detectives found many workers were not inoculated.

The investigation by the Centers for Disease Control and Prevention of facilities in the Grand Junction, Colo., area raises concerns among public health doctors that successes in protecting vulnerable elders with vaccines could be in peril as the more aggressive delta variant spreads across the country.

Nationally about 59% of nursing home staff have gotten their shots, about the same as the overall percentage of fully vaccinated adults — but significantly lower than the roughly 80% of residents who are vaccinated, according to Medicare. And some states have much lower vaccination rates of around 40%.

Some policy experts are urging the government to close the gap by requiring nursing home staffers get shots, a mandate the Biden administration has been reluctant to issue. Nursing home operators fear such a move could backfire, prompting many staffers with vaccine qualms to simply quit their jobs.

To be sure, the vast majority of fully vaccinated people who become infected with the delta variant suffer only mild symptoms.

But "older adults may not respond fully to the vaccine and there's enormous risk of someone coming in with the virus," said Dr. Joshua Sharfstein, vice dean for public health practice at Johns Hopkins Bloomberg School of Public Health.

"Vaccinating workers in nursing homes is a national emergency because the delta variant is a threat even to those already vaccinated," he said.

The CDC conducted its investigation of delta variant outbreaks in elder care facilities in Mesa County, Colo., in May and June. The area is a coronavirus hot spot. The agency said it is assisting states and counties throughout the nation as part of the White House's covid-19 "surge teams."

Nationally, data collected by CDC show that deaths and confirmed infections among nursing home staff have decreased significantly since vaccinations began in January. But the number of deaths reported among staff in July have begun creeping up again, fueling new concerns.

At one memory care facility in the Grand Junction area, 16 fully vaccinated residents were infected and four died, according to a CDC slide provided to The Associated Press. The residents who died were described as being in hospice care, with a median age of 93, indicating they were particularly frail.

The CDC has not released the findings of its investigation publicly, but said it plans to publish the results in an upcoming Morbidity and Mortality Weekly Report. The slide was shared with the AP by a person involved in internal deliberations, who requested anonymity because they did not have permission to release the data.

Of the 16 fully vaccinated residents infected at the memory care facility, CDC found that 13 developed symptoms, described as mild in most cases.

The CDC investigated several nursing homes in Mesa County that were experiencing new outbreaks. At one location — described as "Facility A" — 42% of the staff were still not fully vaccinated, contrasting with only about 8% of residents who had failed to complete their shots.

The CDC found a covid-19 infection rate of 30% among vaccinated residents and staff at the facility, with residents accounting for the vast majority of cases.

Throughout the pandemic, people in long-term care facilities have carried a disproportionate burden of suffering and death, not to mention increased isolation due to lockdowns. It's estimated that nursing home residents represent about 1% of the U.S. population, but they account for about 22% of covid-19 deaths — more than 133,400 people whose lives have been lost.

Experts generally agree that staff are one of the main triggers of nursing home outbreaks, because workers may unwittingly bring the virus in from the surrounding community before developing symptoms.

With the arrival of vaccines and an aggressive effort to get residents immunized, cases and deaths plummeted and nursing homes emerged from lockdown. But covid-19 has not been wiped out. As of the week ending July 4, there were 410 residents sickened nationwide and 146 who died.

Colorado is not alone in seeing nursing home outbreaks as large shares of staff remain unvaccinated.

In Indiana, seven residents died from covid-19 at a facility where less than half the staff — 44% — was fully vaccinated, said Howard County health officer Dr. Emily Backer. Eleven additional residents tested positive in the outbreak that officials believe started in mid-June.

One of the people who died was fully vaccinated, and five fully vaccinated residents were among those who tested positive, Backer added. She would not name the facility.

Backer acknowledged that the facility's 44% staff vaccination rate was "lower than we'd like."

Backer said she's troubled by continued resistance to vaccination, fueled by exaggerated claims about side effects. Some experts fear that hard-won progress in putting down nursing home outbreaks could be lost, at least in some communities.

Laura Gelezunas has firsthand experience with a breakthrough case in a nursing home.

After numerous calls and emails to her mother's Missouri nursing home and the company's headquarters in Tennessee, Gelezunas finally got confirmation that her mom's congestion, headache and sore throat were symptoms of covid-19.

Gelezunas asked that her mother interact with only vaccinated workers, but the directors said they couldn't make promises because of privacy reasons and their inability to mandate inoculations for workers.

"My mom is bedridden. I got people taking intimate care of her and you're telling me you can't tell me that at $7,500 a month that my mom can't have someone that's vaccinated take care of her," said Gelezunas, who lives in Mexico.

Joann told her daughter that between 12 and 15 residents were infected with the virus recently, which she found out from one of her aides.

When it comes to requiring vaccinations, one obstacle is that covid-19 vaccines aren't yet fully approved by the Food and Drug Administration, and are being administered under emergency authorization.

"What we need to do is get past the emergency use basis, to have (vaccination) be a standard of care," said Terry Fulmer, president of the John A. Hartford Foundation, a nonprofit working to improve care for older adults.

Highlighting the potential vulnerability, government numbers show a wide disparity among states in nursing home vaccinations. Vermont has fully vaccinated 95% of its nursing home residents, but in Nevada the figure is 61%. Hawaii is the leader for staff vaccinations, with 84% completely vaccinated. But in Louisiana, it's half that, 42%.

Harvard health care policy professor David Grabowski said he believes trust is the core question for many nursing home staffers who remain unvaccinated. Low-wage workers may not have much confidence in vaccine messaging from management at their facilities.

"I think some of this mirrors what we see in the overall population, but among health care workers it is really disconcerting," Grabowski said.

"There's a lot of really bad information out there that's completely untrue," she said. "It's really sad because I think we have the power to end this with vaccination. Nobody else needs to die from this."

This story has been updated. It was originally published at 12:19 p.m.