Gators adjusting on opposite sides 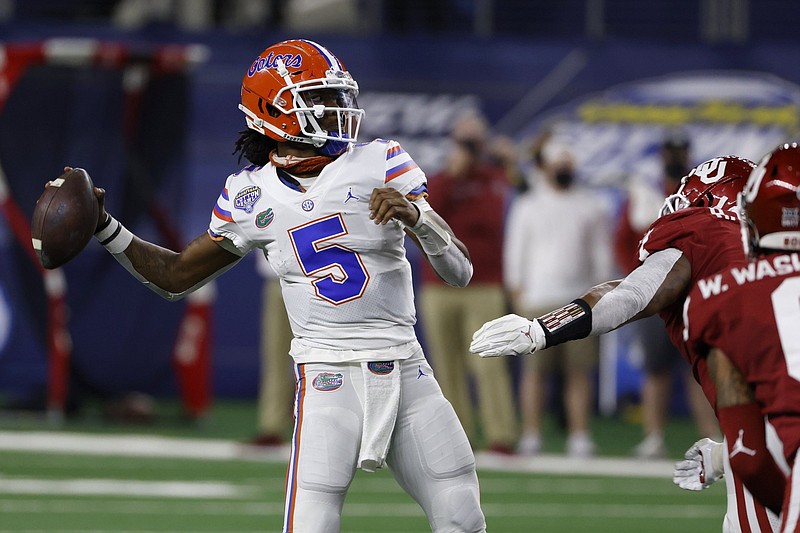 HOOVER, Ala. -- What to make of the direction of Florida football under fourth-year Coach Dan Mullen?

On one hand, the Gators are 29-9 in Mullen's first three seasons -- the best three-year record since Urban Meyer was in the Swamp winning a couple of national championships -- and they're coming off an SEC East title run that included a win over Georgia.

On the other hand, Florida lost its last three games against LSU, Alabama and Oklahoma, all in shootout fashion. The combined score of those three losses was 144-100, as the Gators allowed a jaw-dropping 48 points per game, including a 55-20 loss to the Sooners in the Cotton Bowl.

That run was symbolic of a season in which Florida permitted more than 30 points per game and a school-record 6.1 yards per play.

Mullen retained defensive coordinator Todd Grantham, who is under pressure to deliver a stronger unit while returning just four starters.

Co-offensive coordinators Billy Gonzales and John Hevesey are both back, and they are overseeing a significant change in skill talent after the departures of hugely productive quarterback Kyle Trask, tight end Kyle Pitts and receiver Kadarius Toney.

Mullen was asked if redshirt junior Emory Jones, the favorite to earn the starting quarterback job, would bring him back to his bread-and-butter style of offense, which has prospered under dual threats like Alex Smith, Tim Tebow and Dak Prescott at three different schools.

"Thirteen years here [in the SEC], I don't know what my bread and butter is because we've been all over the place with every different style of quarterback," Mullen said. "If you go back, even being a coordinator, you go back to the Alex Smiths and the Chris Leaks, through the Tebows, to Tyler Russell and Dak Prescott. There's been so many different variations.

"I think the key to it is, and one of the reasons we've been successful is, never try to take a square peg and put it into a round hole. It's identifying what our guys do really well and build around the strengths of not just the quarterback, but the offense as a whole."

Mullen said the Gators, who return four offensive starters, would be a little bit different offensively in 2021.

"But that's part of the fun of coaching, is being able to adapt and change and build around the players that we have," he said.

Florida led the country with 378.6 passing yards per game. Pitts was the fourth pick of the NFL Draft, while Trask was a second-round selection.

Jones had a long wait to take the reins at quarterback after playing behind Feleipe Franks and Trask. However, he is not a green horn, having played in 24 college games. He is 55 of 86 passing for 613 yards, with 7 touchdowns and 1 interception.

"If you get into statistics and go look at Emory Jones' statistics, he's a guy that's played a bunch of football," Mullen said. "He's not coming in as a guy that's never played before. So I'm really excited about that."

The Gators are expected to have a decent run game with Dameon Pierce and Malik Davis both returning at tailback, and plenty of pass-catching options, even after losing top wideout Toney, Pitts and Trevon Grimes.

"We lost a lot of production at the receiver and tight end position, but we still have a lot coming back," Mullen said. "We rotate those guys a lot. We try to do a great job at creating depth at those positions."

Florida' defensive stats were not good, but Mullen took exception to a question about the defense "never figuring it out" in 2020.

"I don't know about that because I think, if you look in different games, we were very maybe erratic defensively at different times, but there's a lot of different things that go into that," Mullen said. "There's some games we played really, really well defensively. There's games where I thought we played well, but statistically maybe weren't great.

Mullen said there were a few games the Gators got out to leads and opposing teams had to play "a different style game" and take chances offensively to "try to put up yards and points as fast as possible" to keep up.

"There's other games, one or two early in the year, I certainly think the learning curve of missing a spring practice and the time off and the speed of the game of going to tackle live for the players and the time off of not being able to do that, I think that showed early in the season, and that improved as the year went on," Mullen said.

No matter the defensive performance, the Gators beat Georgia and suffered two regular-season losses, both by three points at Texas A&M and against LSU.

"I feel like we're the undisputed champions in the East," linebacker Ventrell Miller said. "Like I said, we're looking forward to coming out and winning the whole thing. We come out every year ready to go and ready to rock and roll."

The Gators' schedule is chock full of intriguing dates. After traveling to face South Florida in Tampa in Week 2, Florida hosts Alabama and Tennessee in back-to-back weeks to open league play. The Gators play three of the first four SEC games at home and do not have a league game at The Swamp after Vanderbilt on Oct. 9.

Following that date, the Gators are at LSU, play Georgia in Jacksonville, Fla., are at South Carolina and at Missouri in SEC games and face Samford and Florida State at home.

Mullen touted the program's achievements since his arrival.

"We've been to three straight new years six bowl games," he said. "Hopefully we can get that one step further into a New Year's Six playoff game this year. I'd love the opportunity to get back to Atlanta to compete for another SEC Championship this year like we did last year."