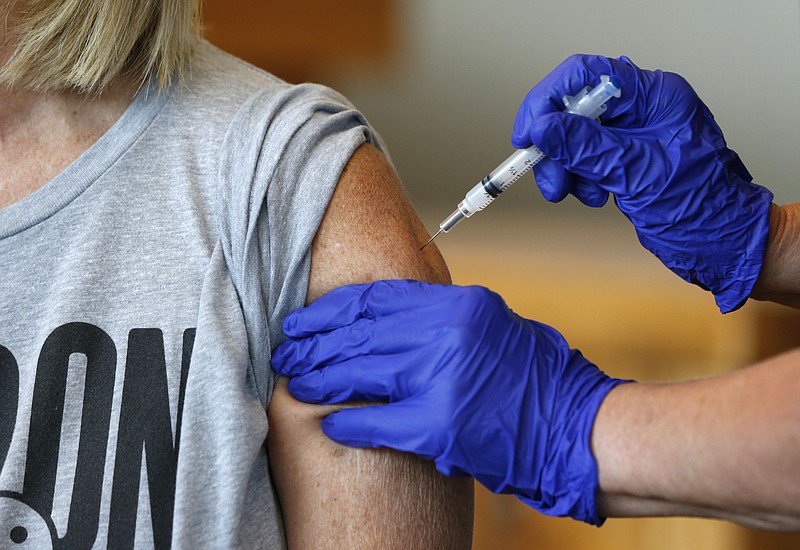 FILE - In this July 12, 2021, file photo, Karen Martin receives a COVID-19 vaccine at a vaccination clinic hosted by James River Church West Campus in conjunction with Jordan Valley Community Health Center in Springfield, Mo. Missouri's health department is reporting the highest daily count of new COVID-19 cases since the dead of winter, and the association representing the state's hospital has warned that the health care system is potentially on the brink of a crisis. (Nathan Papes/The Springfield News-Leader via AP, File)

Reports of athletes, lawmakers and others getting the coronavirus despite vaccination may sound alarming but top health experts point to overwhelming evidence that the shots are doing exactly what they are supposed to: dramatically reducing severe illness and death.

The best indicator: U.S. hospitalizations and deaths are nearly all among the unvaccinated, and real-world data from Britain and Israel support that protection against the worst cases remains strong. What scientists call "breakthrough" infections in people who are fully vaccinated make up a small fraction of cases.

"When you hear about a breakthrough infection, that doesn't necessarily mean the vaccine is failing," Dr. Anthony Fauci, the U.S. government's top infectious disease specialist, told a worried Senate panel this week. The shots are holding up, he said, even in the face of the highly contagious delta variant that is burning through unvaccinated communities

Health authorities have warned that even though the covid-19 vaccines are incredibly effective -- the Pfizer and Moderna ones about 95% against symptomatic infection in studies -- they're not perfect. No vaccine is.

But it wasn't until delta variant began spreading that the risk of breakthroughs started getting much public attention. The barrage of headlines is disconcerting for vaccinated people wondering how to balance getting back to normal with more exposure to unvaccinated strangers — especially if they have vulnerable family members, such as children too young to qualify for the shots.

Sports fans are seeing daily reports about infected athletes, from the New York Yankees to the Summer Olympics. With the Games soon to start, Kara Eaker, a member of the U.S. women's gymnastic team who said she was vaccinated, tested positive in a training camp just outside Tokyo. WNBA player Katie Lou Samuelson pulled out of the Olympics and the 3-on-3 basketball competition after testing positive despite being vaccinated.

And politicians in the nation's capital are being rattled by reports of breakthrough cases, including from a congressman, Florida Republican Vern Buchanan; some Texas Democratic lawmakers visiting Washington as a political protest; at least two people in the White House and several congressional staff members.

One critical question about breakthrough cases is whether the person actually had symptoms, Dr. Francis Collins, director of the National Institutes of Health, told The Associated Press. "Or is this somebody just being sampled out of an abundance of caution because they had to go into some place like the Congress?" he added.

Indeed, the U.S. Centers for Disease Control and Prevention has said for months that vaccinated people don't even need to get tested after a virus exposure unless they develop symptoms. The agency cites limited evidence that they're less likely to infect others than unvaccinated people who get an asymptomatic infection.

But different places have different rules. In Britain, Prime Minister Boris Johnson -- who survived covid-19 early in the pandemic and now is fully vaccinated -- began quarantining over the weekend after contact with someone experiencing mild symptoms from a breakthrough infection.

And rigorous testing is required as thousands of athletes, coaches, officials and media -- not all of whom are vaccinated -- descend on Tokyo for the pandemic-delayed Olympics.

While there's not a specific count, it's clear breakthrough infections are rare. As of July 12, the CDC had tallied 5,492 vaccinated people who were hospitalized or died and also tested positive for coronavirus — out of more than 159 million fully vaccinated Americans. CDC Director Dr. Rochelle Walensky has said 99.5% of all deaths from covid-19 are in the unvaccinated.

There isn't a separate count of mild or asymptomatic breakthroughs, although CDC is tracking those through studies such as one that gives weekly virus tests to more than 5,000 essential workers, she told senators.

Breakthroughs tend to be mild because a vaccinated person's immune system doesn't have to start from scratch to fight the coronavirus. Even if the virus sneaks past vaccine-spurred antibodies and starts replicating in your nose or throat, secondary defenses jump into action and usually, "the virus is stopped in its tracks within a few days," said University of Pennsylvania immunologist Scott Hensley.

There are caveats. The vaccines don't work as well in people with severely weak immune systems, such as organ transplant recipients.

And the government is watching closely for signs that breakthrough cases, especially serious ones, are rising, because that might signal the need for booster vaccinations.

But meanwhile White House officials want to "normalize" the concept of breakthrough infections for the public, because they're worried that these rare, inevitable events could play into the misinformation wars that have helped to keep millions from rolling up their sleeves.

"The vaccines were developed to keep us out of those terrible institutions we call hospitals," said Dr. William Schaffner, an infectious disease expert at Vanderbilt University. "We have to keep coming back to that."