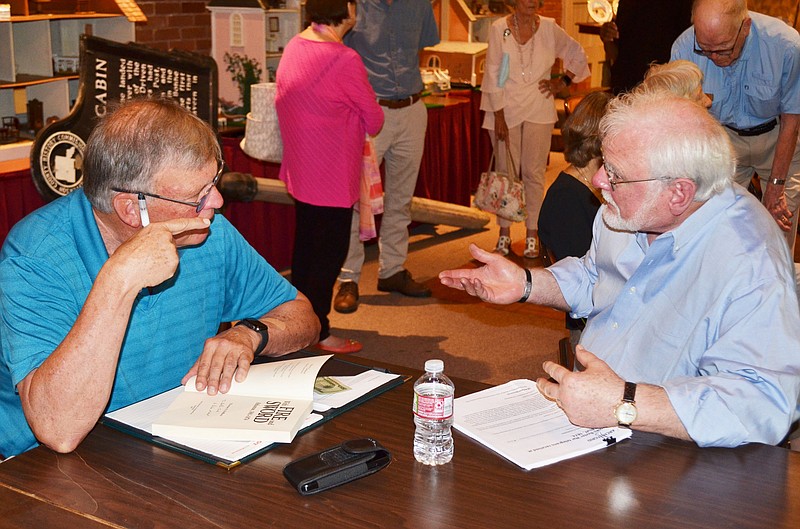 Thomas A. DeBlack signs a copy of his book, With Fire and Sword, while discussing Arkansas history with Little Rock historian Griffin Smith. (Special to The Commercial/Richard Ledbetter)

A future mayor of Pine Bluff ran away from home at age 15 to join the Confederate Army.

DeBlack is the author of "With Fire and Sword," a history of Arkansas from 1861 through 1874, published by the University of Arkansas Press in 2003. He also co-wrote a college-level textbook titled "Arkansas -- A Narrative History" and is currently putting together another book based on his doctorate dissertation regarding the Johnson Family's Lakeport Plantation in Chicot County.

The title of his Pine Bluff lecture was, "A most eventful life -- A brief biography of Hercules King Cannon White."

"Born on April 4, 1845, in Louisville, Ky., the fifth of nine children...[White] was a student of the Louisville Male High School. One newspaper article noted him as 'a strange boy, full of the spirit of adventure.' He ran away from home to join the Confederate Army at age 15," DeBlack said.

White initially joined Co. E 2nd Kentucky Infantry in March of 1861. He later came into service with Co. C 1st Kentucky Cavalry and was captured in Louisville Nov. 26, 1862. While being part of a prisoner exchange in Vicksburg, he was listed on the prisoner roll as, "17 years old; 5'10" tall; with gray eyes, red hair and a light complexion."

DeBlack continued, "He later joined John Hunt Morgan's cavalry... and subsequently joined a guerilla band led by Billy Marion Morton in Kentucky. On Dec. 23, 1864, he was involved in a raid on the steamer 'Morning Star.'...As second in command, he was later charged with three felonies: being a guerilla, robbery and murder. He served two years in prison at Louisville. He was the only member of Marion's company to survive the war.

Following his release, the tall red-headed White moved to Pine Bluff and worked for a while as tutor for the children of prominent citizens while studying law under Col. M.L. Bell. He received his license to practice in 1868.

"Historian John Harrell described White as, 'a man of unusual strength of intellect and originality, full of resource, energy and audacity' and 'so frank and fearless in his manner with men that he controls them by sheer force of will and dash,'" DeBlack said. "As might be expected of a man with these characteristics, White soon became active in politics, allying himself with Powell Clayton [Republican governor of Arkansas 1868-1871, U.S. senator 1871-1877]."

James Leslie, the late local historian, says White was considered an excellent attorney but his real strength was politics. He quotes the "Pine Bluff Press Eagle" from 1883 which described White as "vehement in speech and making a determined and impressive appeal to the jury, court and audience." White's first elective office was as a Pine Bluff alderman in 1871. He was reelected in 1873, according to DeBlack.

DeBlack went on to describe White's active role in the infamous Brooks-Baxter War that arose over a disputed gubernatorial election of 1872, in which the former Confederate officer led a cadre of 300 African American volunteers aboard a steamer in Pine Bluff.

They voyaged up river to the state capital in Little Rock on April 18, 1874, in support of Elisha Baxter's claim to the governor's office in the Old State House.

"Facing [the deposed] governor, White proclaimed in a loud voice, 'I am here, Governor Baxter, for the purpose, if necessary, of surrendering our lives to reinstate the lawful government of Arkansas. Furnish us, simply, with the means -- give us the authority -- pronounce the order and I will guarantee to you sir, that in 25 minutes from the time the order is written, Joseph Brooks will either be in hell or in the archives.' It was a bold pledge, particularly in light of the fact that many of White's soldiers were unarmed," DeBlack said.

Baxter still hoped for a peaceful solution...and was somewhat taken aback by White's bold statement. Unfortunately, a disturbance broke out, shots were fired and one man was killed by a stray bullet before order was restored. In an effort to calm the situation, Baxter requested White return his men to Pine Bluff.

"On April 30...White was informed Brooks supporter [former Confederate] Capt. J.M. Murphy had formed a company of 200 African American recruits about 16 miles downriver from Pine Bluff," DeBlack said. "White gathered about the same number of white and black troops onto the steamboat 'Belle of Texas' where he disembarked at New Gascony in Jefferson County, attacked and routed Murphy's force, killing seven to nine men and wounding 20 to 30. Following his return to the governor's office, Baxter appointed White as general of State Militia, a rank the former guerilla claimed the rest of his life."

According to DeBlack, in 1885, White ran for mayor of Pine Bluff on the pledge to clean up gambling and corruption, besting three opponents by a small margin.

White's efforts to clean up gambling proved somewhat problematic in that he was himself a regular patron of the saloons and much of his political support was derived from saloon keepers and their clientele. Despite ongoing criticism in the press for his failure to shut down gambling houses and the occasional violent altercation that led the "Press Eagle" to write, "Such conduct should be beneath the dignity of the chief executive of the city," White served three consecutive terms as mayor until being defeated by renowned local businessman Joseph William Bocage in 1889.

When Bocage did not seek a second term, White returned to city hall in 1891.

"For reasons that are not clear, White did not seek reelection in 1893. The four-term mayor did not seek the office again until 1901 when incumbent Douglas Claiborne Bell defeated him by 30 votes. Two years later, White sought the office again, running unopposed and doing so again in 1905 when he won his sixth term as Pine Bluff's mayor."

DeBlack concluded, "White fell ill during his final term and apparently anticipated his death. One newspaper described him as, 'broken in health and shattered in fortune by the fickleness of fate.'"

"White died Jan. 16, 1907...City stores closed for one hour during the funeral. He was buried in an unmarked grave in Bellwood [now Graceland] Cemetery. A fundraising effort was begun November 1908 and in January 1914, "The Graphic" reported, 'an imposing monument had been placed at White's resting place, honoring the memory of one of Arkansas's greatest men, prominent in the early life of the city and whose noble deeds and remarkable accomplishments stamped him as a leader."

Also during the historical society meeting July 18, DeBlack, the son of a Methodist minister, shared where his love of history began.

"I graduated high school in Nashville, Ark., in 1969. With no real career goal in mind, I began college as a business major at SMU [Southern Methodist University] in Dallas. Not satisfied with that, I switched to P.E. for maybe a week. In my second year at SMU, I had a roommate from Chicago who told me about an interesting class he was taking under Professor James Breeden that I should sign up for. He taught Southern history and I found myself fascinated by the subject. I ended up taking several classes under him and we stayed in touch after I graduated. His influence led to my Bachelor of Arts in history from SMU," DeBlack said.

DeBlack returned to his hometown of Nashville where he taught advanced placement history and became high school principal.

"I went on to receive my master's from Ouachita [Baptist] University taking summer classes before leaving my teaching job to pursue a Ph.D from the University of Arkansas in Fayetteville," he said.

DeBlack became a professor of history at Russellville's Arkansas Tech University in 1995 and taught there for 23 years. Fully retired for a year now, he resides with his wife, Susan, and 17-year-old daughter, Susannah, in Conway.

"I like researching, writing and teaching others about Arkansas history. Now days I spend a good deal of time going around speaking to various groups on the subject," he said. 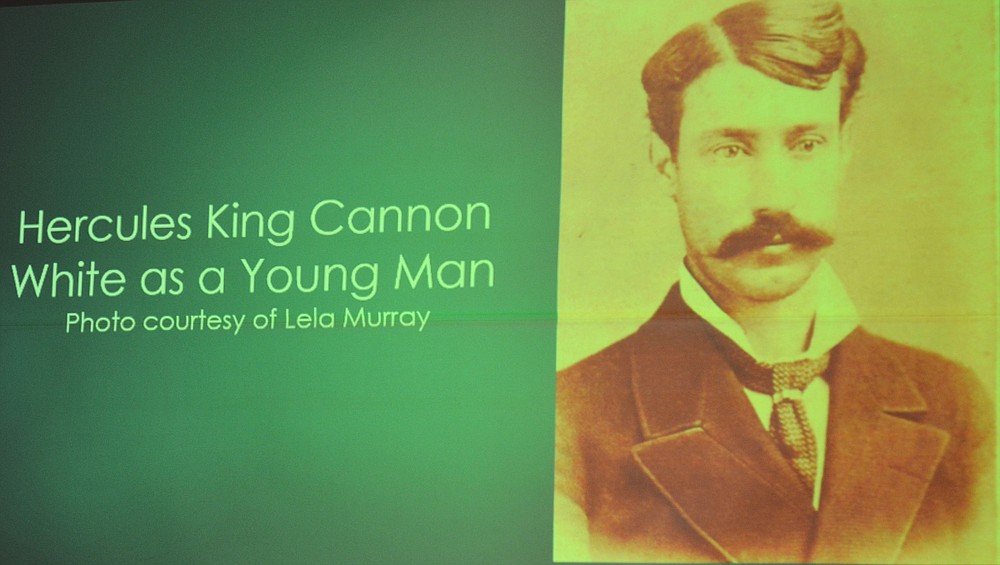 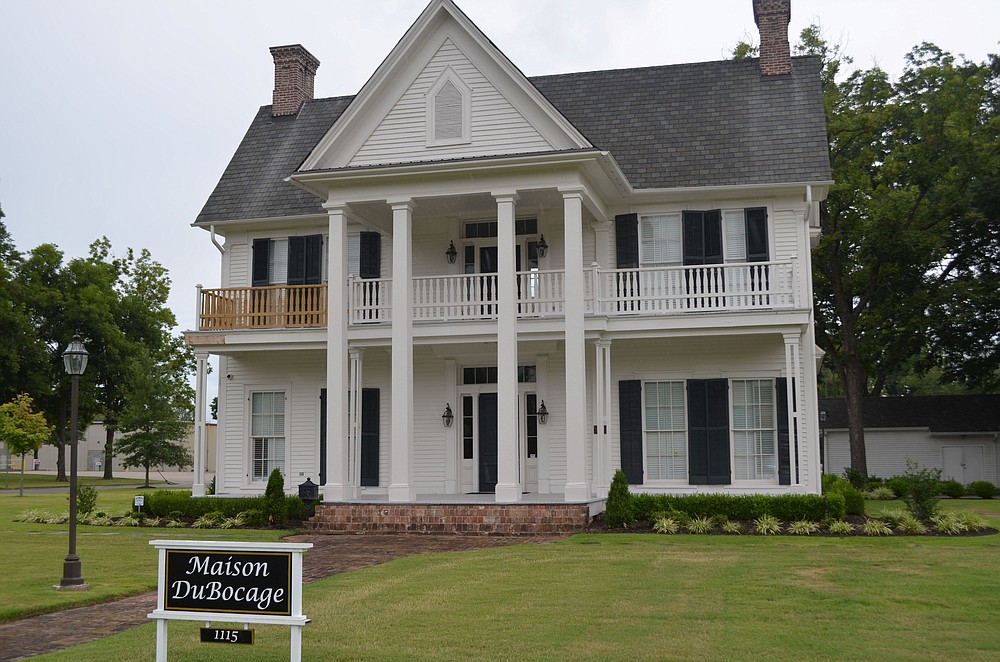 The 1866 Greek Revival Maison Du Bocage stands at 1115 W. Fourth Ave. at Pine Bluff. Added to the National Register of Historic Places in 1974, it was the home of prominent businessman Joseph William Bocage, one of only two men to defeat Hercules King Cannon White in his bids for Pine Bluff mayor. (Special to The Commercial/Richard Ledbetter)