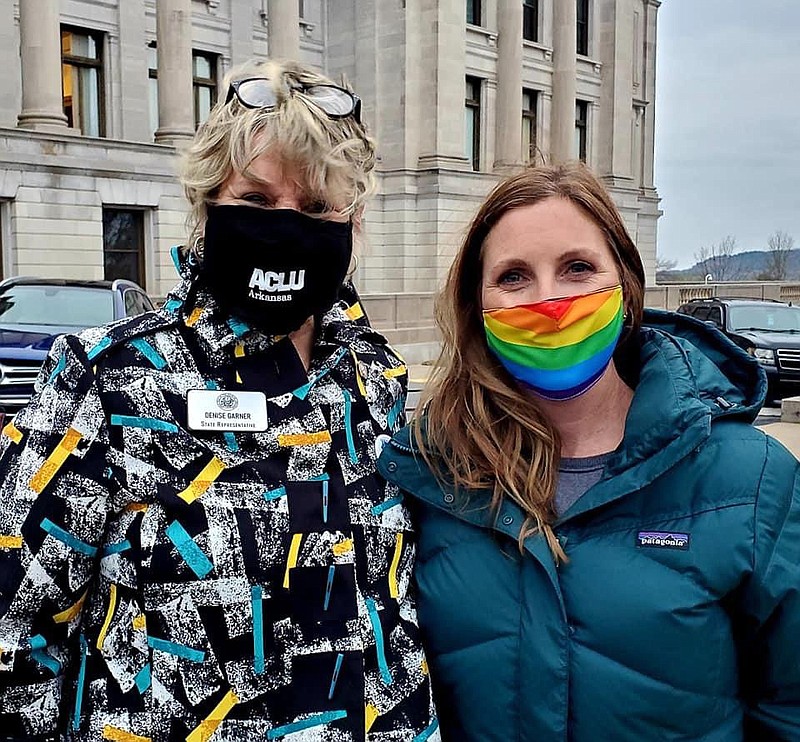 Lacey Jennen poses with Arkansas Rep. Denise Garner at the rally for transgender rights on the steps of the State Capitol on March 22. (Courtesy photo/Lacey Jennen)

A mother wearing a rainbow mask and her 15-year -old daughter stood on the steps of the Arkansas State Capitol building on March 22, 2021. Equipped with a transgender flag and a poster stating "stop bullying our kids," the pair drove three hours to protest the recent legislation aimed at transgender youth in Arkansas.

On April 6, Arkansas became the first state in the U.S. to ban gender confirming services for transgender youth. This bill will make it illegal for clinicians to provide hormone therapy and puberty blockers for children younger than 18, regardless of parental consent. The ban is opposed by several groups, including the American Civil Liberties Union and the American Academy of Pediatrics. Another bill will allow health care workers to refuse to treat patients because of religious or moral objections. Additionally, Arkansas legislators have banned transgender women and children from participating in school sports teams consistent with their gender identity.

"It's been tough as a parent of a transgender child in Arkansas, I would say, with all of the legislation going on," Lacey Jennen says. "We're just concerned now with what that looks like for us with the new legislation."

Despite the legislative changes, Jennen and her oldest daughter, who is not named for her privacy, were looking forward to a summer camp free of judgement at Good Shepherd Lutheran Church.

Along with her husband and three daughters, Jennen has been attending services at Good Shepherd since 2020. In April, the church's pastor, Clint Schnekloth, had called Jennen and other families to see if they would be interested in a summer camp opportunity for LGBTQ children. After that, Jennen was involved in planning the details of the camp.

Schnekloth has served as the pastor at Good Shepherd Lutheran Church for 10 years. The church, located in Fayetteville, has around 500 members, many of whom come from the LGBTQ community, Schnekloth says.

"A lot of trans young people that I know, in particular, what's been going on in the state around the politics around trans identity has just been really awful for them," Schnekloth says, "You know, to have who you are be so politicized, and be the topic of so much legislation."

Schnekloth says his goal was to give the LGBTQ youth of his church something positive to look forward to. He wanted LGBTQ youth and allies to feel safe and valued by their community.

The camp took place July 5-10 and was led by LGBTQ individuals, Schnekloth says. The camp was open to kids in middle school, junior high and high school.

Conner Newsom Doyle is the Good Shepherd youth and camp director. With the help of 35 volunteers, the queer camp had 86 participants.

The camp took place from 9 a.m. to 6 p.m. each day, and campers could choose between five core activities such as fine art, performance art, outdoor education, recreation and hair and styling.

For the first hour of each day, empowerment groups, made up of 10 campers of the same age, met with a licensed counselor to share their thoughts and feelings.

"It was really fun to watch campers find their look [during the fashion show]," Doyle says. "The way they lit up and opened up while doing that, it emphasized why we should do this camp -- because it gives this moment of pure and free expression."

The art activities included a communal abstract art piece, a poetry workshop, collage self-portraiture, clay building and a paper doll activity where campers created a paper doll of themselves in the style of drag performers.

Outdoor education activities included hunting for macroinvertebrates in a local creek, birding and making seed balls for butterflies and other insects.

The hair and styling activity was a special effects makeup class.

"Immediately, as soon as I walked into the (Good Shepherd) sanctuary, I just felt like I was home," Young says.

In 2014, the Good Shepherd Lutheran Church became a Reconciling in Christ (RIC) congregation. The RIC program is for Lutheran communities that welcome, include and affirm LGBTQ individuals in the general congregation as well as in leadership positions.

Young says that the camp is a positive response to the recent Arkansas legislation regarding transgender people.

"The camp is a positive way to directly work with the people that this (legislation) is hurting the most," Young says.

Young, who says she knew she was gay at 16, grew up in a church where the leadership expressed that God's love was conditional. That same year, Young left that church because she felt it was not a welcoming place for her.

At Good Shepherd, Young says that the leadership helps her and others believe that they are loved just as they are.

That message has been life-changing for Young, she says.

"I'm certainly not a courageous person like so many of my LGBTQ siblings are," Young says. "But it wasn't until I started going to Good Shepherd Lutheran Church and got validation [that] all of a sudden, I felt I accepted myself when other people accepted me."

Young says the acceptance of the congregation of Good Shepherd is the reason she felt strongly led to help with a camp for LGBTQ kids,

"What if I had been given the opportunity to to be validated in the way that this queer camp can affirm children and adults?" Young muses. "What if I'd been given that opportunity when I was a kid? I don't know how my life would have changed. But I feel like now I can pass on the validation that I've received at age 62."

Jennen says that she is proud to attend a church that accepts, includes and loves everyone. She says that Good Shepherd allows her family to have full participation as a family.

"Church has been a part of my entire life and seeing how it's been twisted and used to push a hateful agenda has been heartbreaking," Jennen says.

Jennen and her husband both grew up in Arkansas and attended college in the state, she says. The couple decided to stay and raise their children in Arkansas. With the recent legislation, they have had difficult conversations about whether the state is the right place for their family.

"We want to make sure that this is a safe place to raise a family like ours," Jennen says.

Jennen says that if legislators in Arkansas continue to take steps against transgender youth, her family may have to consider moving to another state for the health of her daughter.

In the meantime, Jennen and her family will continue attending Good Shepherd's online Sunday services. The oldest daughter has joined a youth group led by Schnekloth where they play Dungeons and Dragons. All three daughters attended the Queer Camp this summer.

On the final day of camp, Evelyn Rios Stafford spoke to the campers about her experience as the first openly transgender person to serve on the Washington County Quorum Court.

"It was really cool," Doyle says, "Especially on that final day, to see this group of kids who opened up in every single possible way."

Doyle wants to find a way to engage LGBTQ youth throughout the year in addition to the annual Queer Camp and is already beginning to plan for the second annual event, which will be July 11-15, 2022. 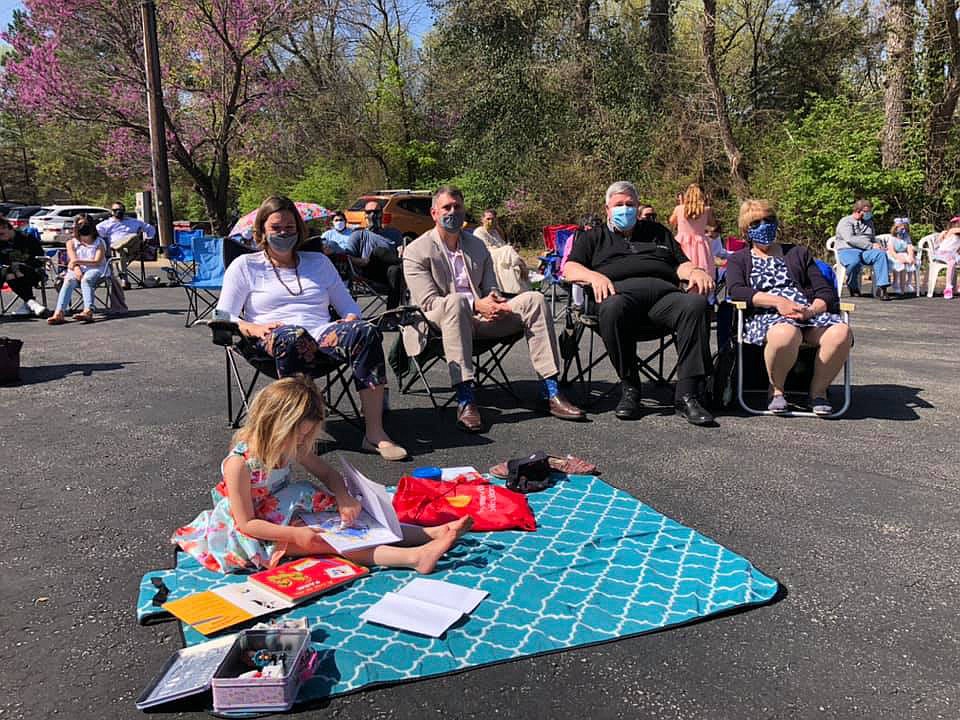 Members of Good Shepherd Lutheran Church attend an outdoor Easter church service on April 4. Good Shepherd has around 500 members, many of whom are members of the LGBTQ community. (Courtesy photo/Clint Schnekloth) 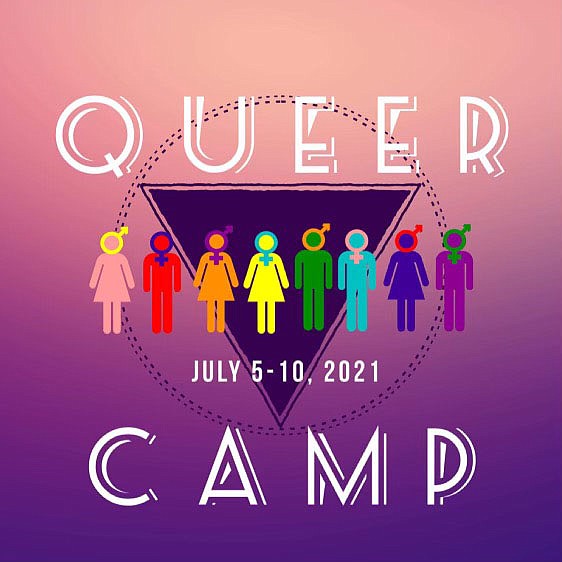 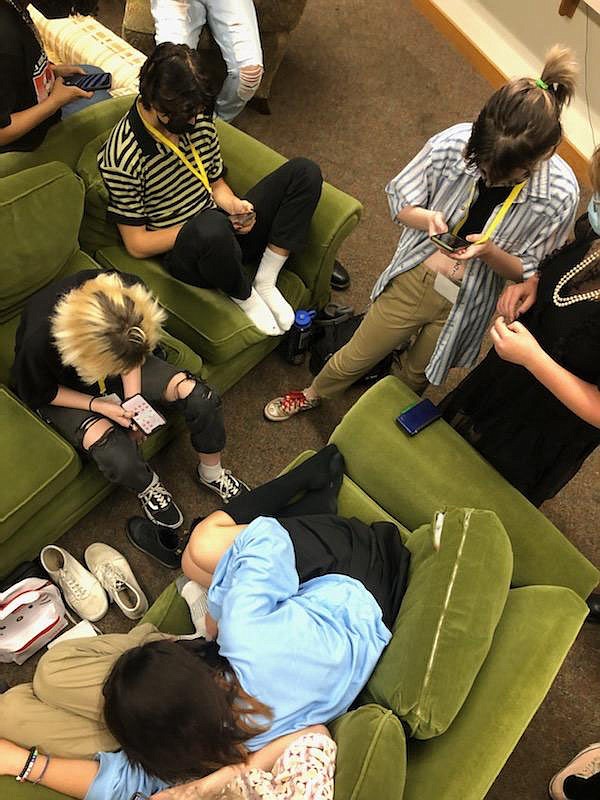 Some of the 86 summer campers hang out at a “Queer Camp” hosted in July by Good Shepherd Lutheran Church in Fayetteville. (Courtesy photo/Clint Schnekloth)
More News