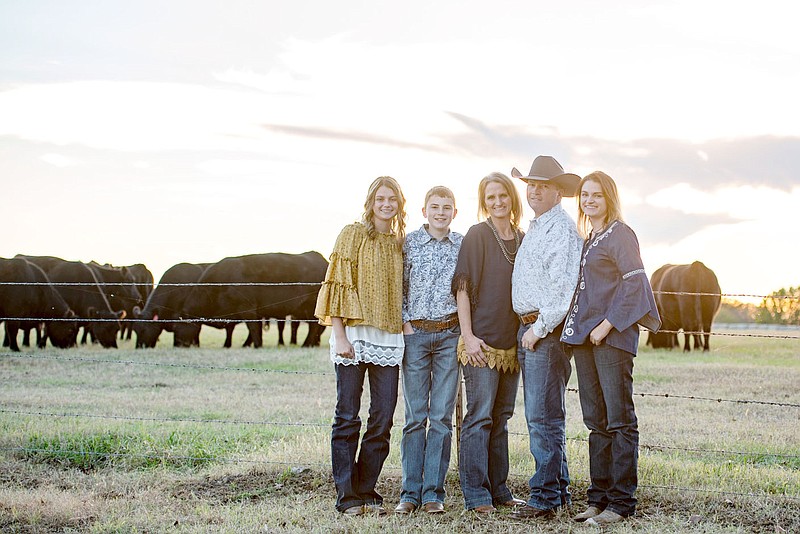 COURTESY PHOTO The Keaton family, Courtney, left, Rhett, Jennifer, Vance and Callie, are pictured on their farm in Anderson.

ANDERSON, Mo. -- Vance Keaton of Anderson runs a beef cattle farm with his wife and three children while also tackling a full-time job.

"(Farming) was something we liked and wanted to do. We like cow-calf operations the most. That's what we enjoy. Dealing with animals and seeing the baby calves each spring and fall," he said.

They raise Angus and Simmental cattle.

"We diversified 10 years ago and have some broiler houses on the edge of Oklahoma and in Stella, but our passion is beef cattle," he said.

Asked what it takes to be successful in farming, he answered, "Patience, willingness to make it your lifestyle. You've got to make sure that it comes first. You've got activities planned but, if a cow starts having a calf, it's probably at the most inconvenient time. You've got to take care of those animals. Budgeting and planning, knowing what you can and can't do. And you'd better have a love for it. It's no fun to bust ice when it's zero degrees, and it's no fun to buck hay when it's 120 degrees. But we enjoy the people we meet, and we enjoy the work that's done at the end of the day. Helping feed the world, that's a good feeling."

He said among the things he enjoys about farming are seeing how productive he has been by the end of the day, being able to do things as a family, and seeing his children be successful and make lifelong friends. He also noted there are small rewards such as seeing a newborn calf or watching a sunrise or sunset.

Challenges in farming include the weather, growing regulations, government oversight, markets and figuring out how to best market his product, he said. Weather is probably the biggest challenge, he added.

He added he believes that farmers need to be part of their professional organizations so their voices can be heard.

"I'm a firm believer in 4-H and FFA. They helped us develop into the adults we are," he said.