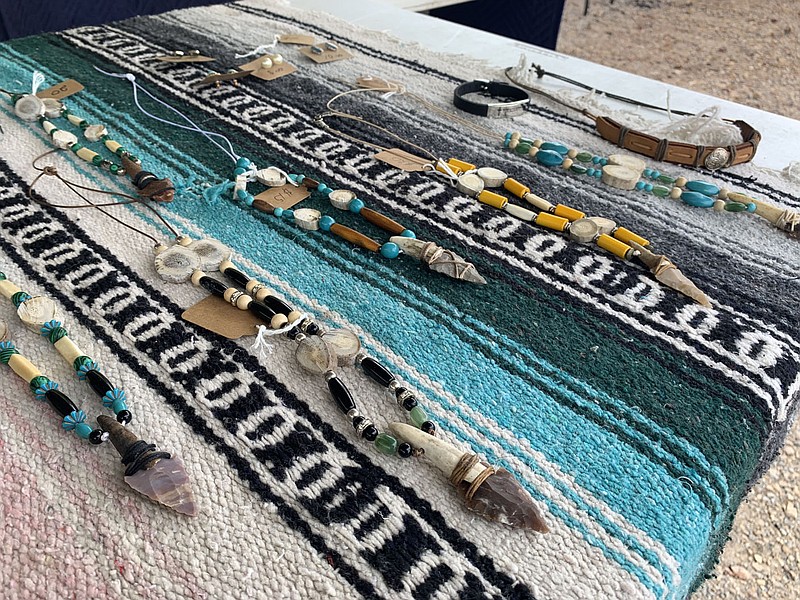 Sally Carroll/Special to the McDonald County Press Carlos Martinez creates jewelry crafted from antler buttons, arrowheads, beads and more. He sells his one-of-a-kind jewelry and other handcrafted items at the Farmers Market at Sims Corner on Saturdays.

PINEVILLE, Mo. -- Carlos Martinez creates each piece of his art to reflect his Apache heritage.

Martinez also creates walking sticks and etches mirrors, even creating his own frames.

His wife, Kelly, who creates leather purses, said her husband's creative talent is unmatched. "He has talent galore," she said.

Carlos is one-half Apache Indian, and hails from the Yuca Tribe in New Mexico. He purposefully creates each piece to stand on its own, reflecting artistry and different colors. His art showcases his own technique for preserving and promoting his culture.

Many shoppers have flocked to his handcrafted merchandise, which features feathers, rattles from a snake, leather, cow teeth and hip bones.

The couple, who live near Sims Corner, are now selling their art at the Farmers Market at Sims Corner on Saturdays.

Martinez has sold tons of items in Oklahoma, Texas, Missouri, Arkansas and Colorado. He often sells merchandise at powwows he attends, he said.

Most of the items he creates are inspired from dreams, which give him ideas, his wife said. Sometimes, he's simply motivated by seeing the potential of an item that can be transformed.

That happened when he saw a small block of wood with a chief's picture on it at a flea market for only $1. He then attached feathers all around it, with the block of wood as the centerpiece. The art piece made a statement, and the artist didn't want to sell it. Instead, he gifted it to his son-in-law, who now displays it in his living room.

Martinez, who also takes in custom orders, is motivated to create all kinds of pieces that people can celebrate.

His own design, the Apache Star, is comprised of numerous feathers, he said. He and his wife are fortunate that friends often supply them with the needed items for his artwork. They've also been known to collect feathers from a dead buzzard, if they happen upon one, his wife added.

The earthy, organic look to his art requires the artist to research and grow as an artist. It's work that the customers love, he said.

One weekend, a young man purchased a walking stick from them at the Farmers Market. He seemed very enamored with it, Kelly Martinez said

The next weekend, the couple took their grandchildren to Silver Dollar City to enjoy the day. Ironically, they ran into the very same young man who had purchased the walking stick. He told them he had received many compliments throughout the past week while using his walking stick.

It's that kind of amazing feedback that keeps the artist motivated to create more unique pieces. 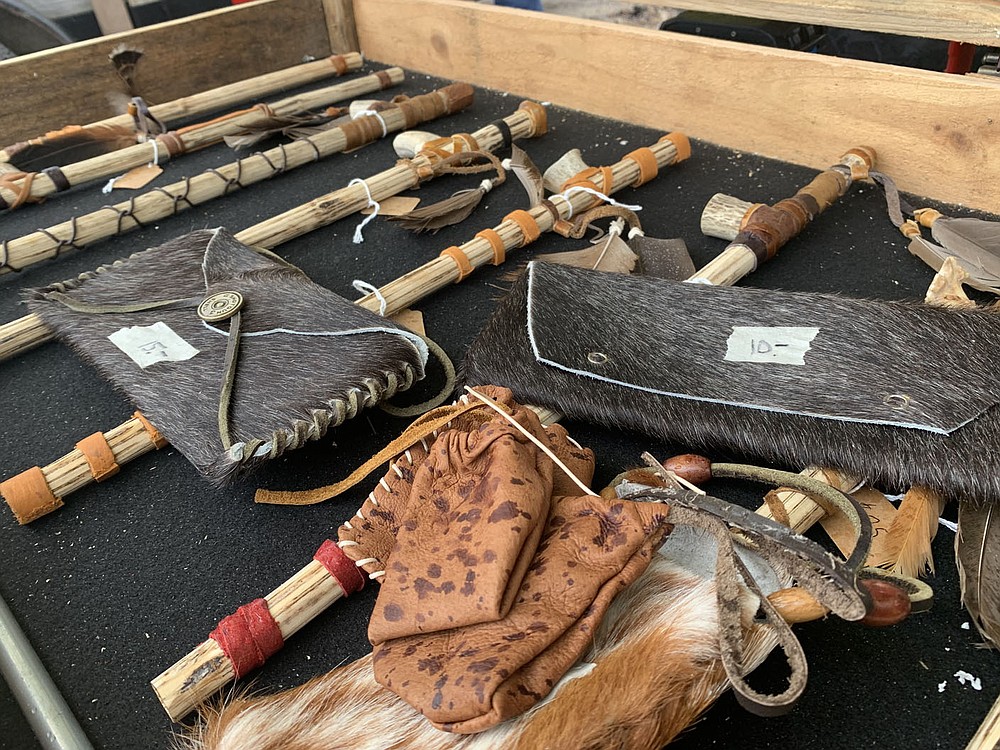 Sally Carroll/Special to the McDonald County Press Carlos Martinez creates handcrafted peace pipes, knives and jewelry to reflect his Apache heritage. His wife, Kelly, creates leather purses. They sell their items at the Farmers Market at Sims Corner on Saturdays. 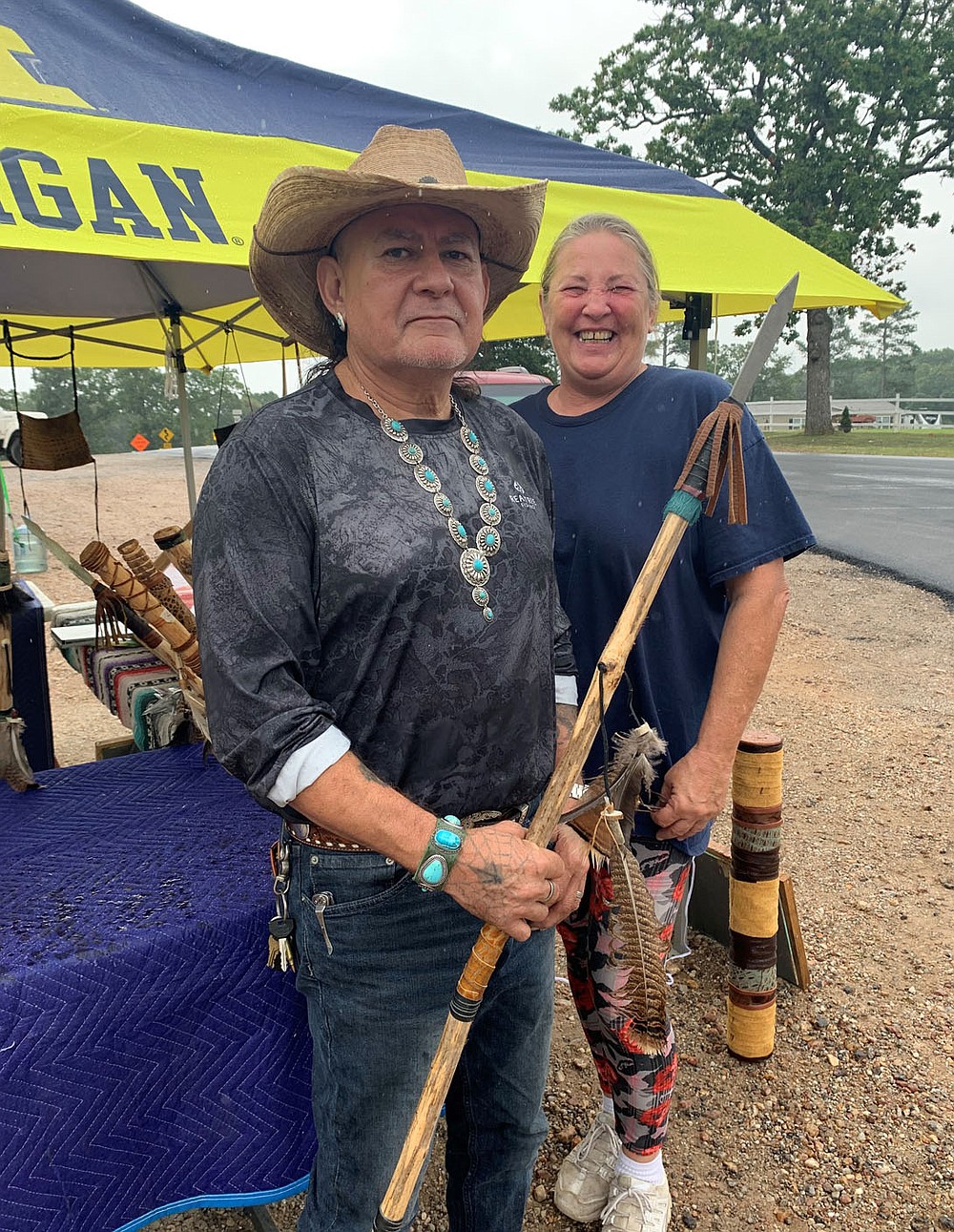 Sally Carroll/Special to the McDonald County Press One of the most popular items Apache artisan Carlos Martinez creates is the handcrafted walking stick. His wife, Kelly, said he has "talent galore."