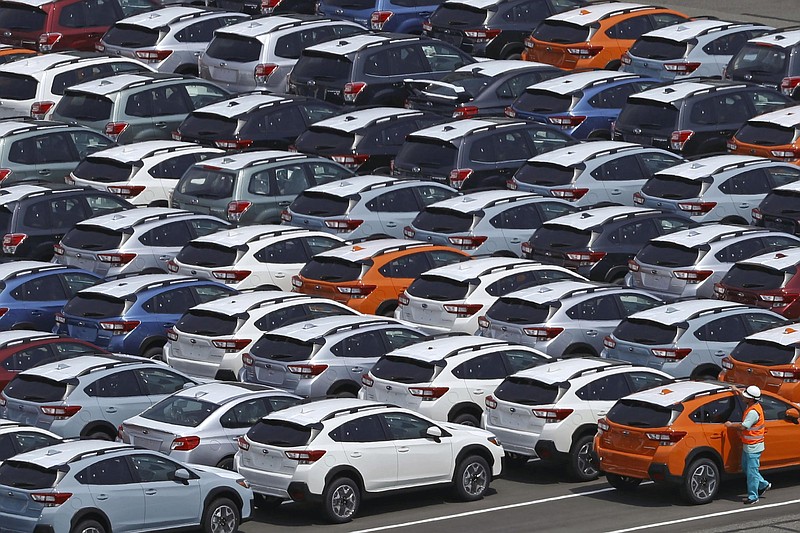 Vehicles wait to be exported at a port in Kawasaki, near Tokyo. Japan’s exports in June jumped 49% from the year before, marking the fourth-straight month of growth. (AP/Kyodo News)

Japan and South Korea continued to rack up solid export gains in a sign that the virus variants have yet to have a major effect on global demand even as the recovery in world trade inches closer to its peak.

Exports from Japan, the world's third-largest economy, jumped 49% in June from the dismal level of a year earlier, while the value of South Korea's overseas shipments in the first three weeks of July gained by a third.

While both figures point to a peaking of gains compared with last year's very weak performance during the pandemic crisis, exports continued to gain on a month-over-month basis, an indication that the recovery in global trade still has legs. Japan's shipments were up nearly 10% from two years earlier, the biggest gain from 2019 this year.

Still, economists cautioned that monthly export gains were also close to plateauing and would be offering less help to global growth in the second half of the year, with the impact of virus variants still difficult to fully assess.

"The recovery in the global economy is starting to look more like a swoosh than a V," said Cho Chuel, an analyst at the Korea Institute for Industrial Economics and Trade. "The virus variants will weigh on global commerce and temper the views of optimists who had raised their growth forecasts until recently."

The Japanese and Korean data showed that exports to China and shipments of cars and semiconductors continue to pile up gains. China already released figures showing its exports increased 32% in June, a slight acceleration from the previous month.

Continued growth in China, the region's economic bellwether, will be necessary to keep fueling the recovery. Second-quarter growth data suggests Beijing can meet its growth target of more than 6% for the year, and continue to drive global demand for commodities and industrial goods.

"Markets have started to get jittery over concerns of further outbreaks, but the economic data isn't showing a lot of impact from people refraining from activity," said economist Hiroaki Muto at Sumitomo Life Insurance Co. "The hard data from June shows the recovery is holding up."

South Korea expects record exports this year to drive economic growth to at least 4%, a bullish view that has supported Bank of Korea plans to forge ahead with policy normalization this year and to lead rate increases in Asia. But that outlook is becoming less certain as the spread of the more contagious variant thwarts plans to lift restrictions in many economies, including Korea itself.

In Japan, even with an acceleration of vaccinations, an uptick in infections has landed Tokyo in its fourth state of emergency and barred fans from the Olympics. A spectator-less games has subdued the mood for an event that was earlier hoped to serve as a psychological turning point for the world in the fight against covid-19.

"Asia overall is getting roiled by the new variant, and it's been difficult for the region to return to where it was before the pandemic," said economist Harumi Taguchi at IHS Markit. "Both in and outside Japan, the recovery pace is dependent on the vaccination pace."