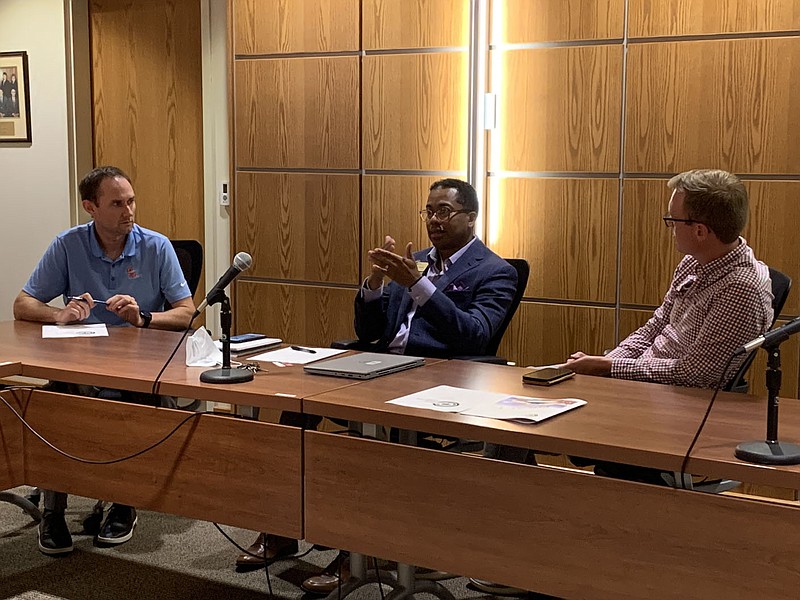 "There's a few adjustments to make, but we have a course," said Todd Kitchen, vice president of student services, at a Sports Committee meeting Wednesday.

The 1-mile course will allow for team training on campus, as well as the potential to host statewide high school meets, Kitchen said.

"That brings parents and runners to Northwest Arkansas," he said.

The course is on the northeast corner of campus and is 75% complete, Kitchen said. Some mowing and flattening of the course is all that's needed to complete it.

College trustees voted 7-1 in November 2019 to start a cross country program to compete in Division II of the National Junior College Athletic Association. It will be the college's first sanctioned sports team. It begins competition in the fall.

Eleven men and four women have been recruited to run, Kitchen said. The coaches have accomplished in six months what it takes many schools a year to accomplish for team recruiting, he said.

The college will offer welcome week activities the first week of school to continue to recruit student-athletes, he said.

"We want to boost those numbers a bit more," Kitchen said.

The season will run from August to November, according to the college's website. Meets will occur biweekly. The team is open to men and women of all skill levels, according to the website. Scholarships are available for qualifying student athletes.

Todd Schwartz, a Board of Trustees member, said more than $21,000 has been raised in support of the team to date.

"We're looking very well on fundraising at this point," he said. "We've reached about half of where we need to be."

Ryan Pulkrabek, an attorney with Walmart, said a 5-kilometer event and 1-mile adult fun run committee fundraiser is scheduled for 7 a.m. Nov. 20 on the Bentonville campus.

The date of the event is ideal, he said, noting it's before Thanksgiving and after the high school cross country season.

In other news, the National Junior College Athletic Association has put covid-19 protocols in place for the upcoming cross country season due to the delta variant of the virus, Kitchen said. Athletes will be required to fill out a covid-19 screening questionnaire prior to competing, he said.

Answering yes to any question may result in covid-19 testing and next steps for dealing with potential virus exposure, Kitchen said.

Information on how to join the Northwest Arkansas Community College cross country team is available at https://www.nwacc.edu/campuslife/registeredclubsorganizations/crosscountry.aspx.