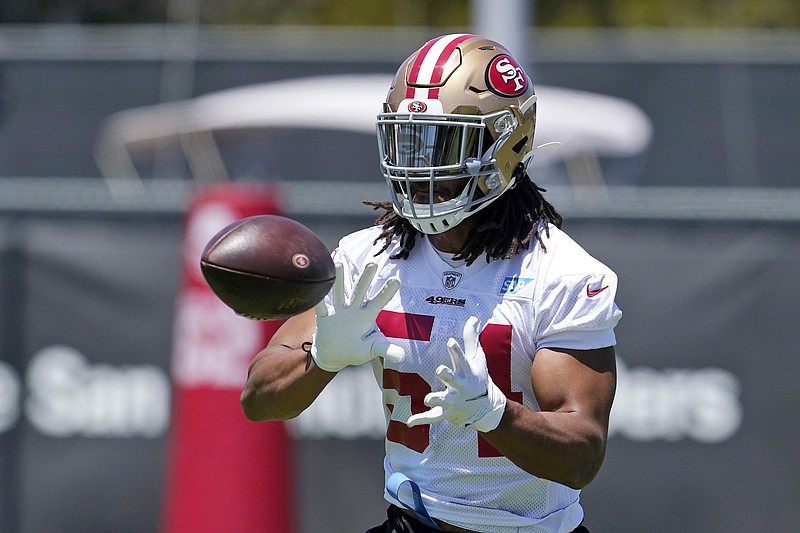 FILE - In this May 25, 2021, file photo, San Francisco 49ers linebacker Fred Warner reaches for ball during NFL football practice in Santa Clara, Calif. The 49ers agreed on a five-year contract extension with Warner that makes him the highest-paid off-ball linebacker in the NFL. A person familiar with the deal said on condition of anonymity that the extension that runs through 2026 is worth about $95 million with $40.5 million in guarantees. The person spoke on condition of anonymity because the team hadn't announced the deal yet. (AP Photo/Jeff Chiu, FIle)

The San Francisco 49ers agreed on a five-year contract extension with Fred Warner that makes him the highest-paid off-ball linebacker in the NFL. A person familiar with the deal said Wednesday that the extension that runs through 2026 is worth about $95 million with $40.5 million in guarantees. The deal tops the $18 million a year average for Seattle's Bobby Wagner, which had been the top at the position. In three seasons, Warner has 21 passes defensed, 3 interceptions, 5 forced fumbles, 3 fumble recoveries, 15 tackles for loss and 4 sacks.

Pittsburgh veteran linebacker Vince Williams announced his retirement Wednesday on the eve of training camp, just months after taking a pay cut to return for a ninth season. The 31-year-old Williams appeared in 121 games for the Steelers after making the team as a sixth-round pick out of Florida State in 2013. He carved out his career early as a special-teams ace, then became one of the more physical inside linebackers in the NFL, forming a close bond with Ryan Shazier before Shazier's career-ending back injury late in the 2017 season. The Steelers released Williams in a salary-cap move in March -- a decision that saved the club $4 million -- then re-signed him to a one-year deal a month later. Williams collected 20.5 sacks during his career.

The New York Jets signed wide receiver Elijah Moore, their second-round pick in April, to a four-year deal Wednesday night. Moore's contract is worth $8.9 million and includes a signing bonus of $3.86 million. ESPN reported the deal includes guaranteed money through the first three years. The move leaves quarterback Zach Wilson, the No. 2 overall selection, as the Jets' lone unsigned draft pick. Moore is expected to have a prominent role in New York's offense, particularly after he had an impressive spring during offseason workouts, rookie camp and minicamp. Moore was a star at Mississippi, where he followed up two excellent seasons with a record-breaking junior year. He set the school mark with 86 catches in only eight games before opting out the rest of the season.

The New England Patriots have signed defensive lineman Christian Barmore to a rookie contract and have now reached deals with their entire 2021 draft class. Barmore's agent, Klutch Sports' Nicole Lynn, posted a photo of him signing the new contract on Twitter on Wednesday. A second-round pick out of Alabama, New England is hoping the 6-5, 310-pound Barmore can be a key cog in helping revamp a run defense that allowed 2,103 yards last season, which ranked 26th in the NFL. Barmore had a team-high eight sacks for the Crimson Tide in 2020 and earned defensive MVP honors in Alabama's national championship win over Ohio State.

The New York Mets traded outfielder Billy McKinney to the Los Angeles Dodgers on Wednesday for minor-league outfielder Carlos Rincon and cash. The NL East-leading Mets also claimed right-hander Roel Ramirez off waivers from the St. Louis Cardinals. The Mets acquired McKinney from Milwaukee on May 25. In 39 games with New York, the 26-year-old batted .220 (20 for 91) with 6 doubles, a triple, 5 home runs and 14 RBI. He was designated for assignment on July 16. The 23-year-old Rincon hit .263 with 12 home runs and 48 RBI in 63 games at Class AA Tulsa. The 26-year-old Ramirez will be optioned to Class AAA Syracuse. He pitched in one game for St. Louis this year and one game last season.

The Baltimore Orioles placed left-hander Keegan Akin and outfielder Anthony Santander on the covid-19 injured list before Wednesday's game at Tampa Bay. Akin had been scheduled to start against the Rays. Alexander Wells, who was on the taxi squad, replaced Akin as Wednesday's starter. Outfielder Ryan McKenna, who had been optioned to Class AAA Norfolk on Tuesday, rejoined the team.

The Seattle Kraken chose Boston defenseman Jeremy Lauzon with the first pick in their expansion draft Wednesday night. They introduced pending free agent Chris Driedger as their first goaltender and passed on Montreal's Carey Price. Driedger agreed to terms on a $10.5 million, three-year contract to join Seattle. Driedger, the former Florida goalie who became the first player to show off the Kraken's home jersey, called it a "life-changing moment." Price's cap hit of $10.5 -- annually -- for the next five seasons, plus the 34-year-old's questionable injury history, led to Seattle passing on him.

Finals ratings up from 2020

TV ratings for the NBA Finals and playoffs posted sizable increases over last year. According to Nielsen, the six-game series between the Milwaukee Bucks and Phoenix Suns averaged 9.91 million viewers, a 32% increase over last year's series between the Los Angeles Lakers and Miami Heat, which also went six games. However, the average makes it the fourth-lowest since 1997. The Lakers-Heat series -- which was played in October in the Orlando bubble after the coronavirus pandemic pushed the season back five months -- averaged only 7.45 million. San Antonio's 2007 four-game sweep of Cleveland (9.29 million) and the Spurs' six-game victory over New Jersey in 2003 (9.83 million) are the other series to average fewer than 10 million since 1997.

The first increment of the $1.5 billion sale of the Minnesota Timberwolves to e-commerce mogul Marc Lore and retired baseball star Alex Rodriguez has been formally approved by the NBA. The Timberwolves issued a statement Wednesday confirming the transaction and welcoming Lore and Rodriguez to the organization. The deal, which also includes the WNBA franchise Minnesota Lynx, was first reached between current owner Glen Taylor and Lore and Rodriguez this spring and was structured to begin with an initial transfer of a 20% stake in the club this year. Lore and Rodriguez will then have the right to purchase an additional 20% share in 2022 and an additional 40% share in 2023, when they would become controlling owners of the basketball teams.