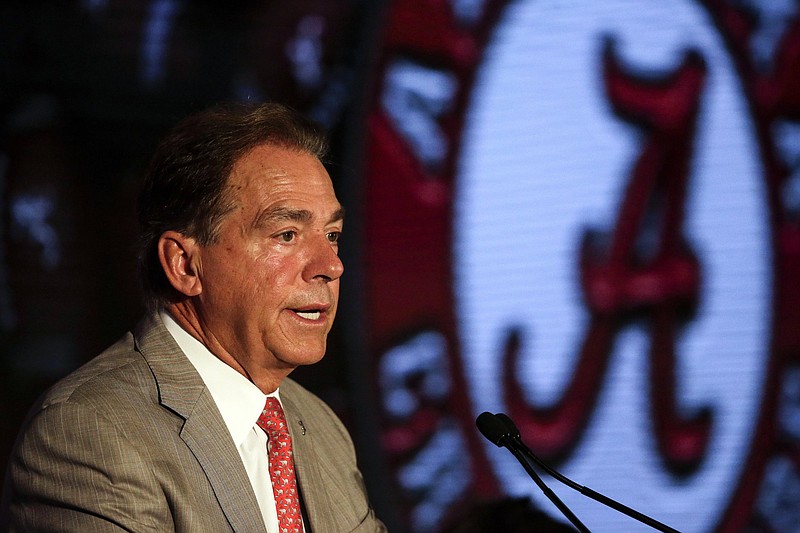 HOOVER, Ala. -- Alabama Coach Nick Saban, informed of the complimentary remarks made about him by Ole Miss Coach Lane Kiffin on Tuesday, returned them in his morning session Wednesday.

Kiffin worked three seasons as offensive coordinator under Saban from 2014-16, a period that produced three SEC titles, one CFP national championship and another appearance in the title game. Alabama's record in that span was 40-3 before Kiffin departed, between a win over Washington in the CFP semifinals and a loss to Clemson in the CFP championship game, to take the head coaching job at Florida Atlantic.

Two of those losses were against Ole Miss, and the other came against Ohio State in the first CFP playoffs. Saban credited Kiffin with being on the cutting edge of his change in offensive philosophies.

"Well, Lane did a fantastic job for us when he was the offensive coordinator," Saban said, adding he didn't think Kiffin got enough credit for the transition. "We made a tremendous change when Lane came in, and Lane had always been the same, kind of philosophy-wise, as we were in terms of pro-style football.

"And because of what Ole Miss -- and it's ironic that he's at Ole Miss now -- had done and beaten us several times running the spreads, running the RPOs, running the screens and things that are difficult to defend ... and we weren't utilizing some of those things, which I thought put us at a disadvantage, and Lane really hadn't done much of that stuff, either.

"So when he came in, I said, 'Look, we want to change this. You need to research this. You're smart. We can do this.' He actually did implement that and was the first one to sort of change how we did things on offense. It enhanced our opportunity to score more points."

Kiffin, who did not engage in regular media sessions at Alabama, has since tweeted things about and to Saban, such as references to Saban's famous "rat poison" remarks regarding positive media coverage. Kiffin even brought that up on Tuesday.

"I think there's been, because we're a little different, a lot of people have sort of wondered what the relationship was, but we never really had a bad relationship because there was always a lot of mutual respect for the kind of play caller he was, the kind of coach that he was, and the job that he did," Saban said. "I actually said and told the people when he went to Florida Atlantic that Lane will be a better head coach than even he is an assistant because he has those kinds of qualities. Obviously, he hasn't disappointed in the job that he did there or the job he's done at Ole Miss.

"So none of this is a surprise to me. And I didn't hear his comments, so I can't comment on those, but I can only say from my perspective how much respect I have for him as a coach."

Fisher said he is intertwined with the Bowden family based on his coaching path and their connection to Samford College in Birmingham, Ala.

Fisher said he had a long conversation with Bowden about a month ago.

"Coach Bowden has been an example to all of us," Leach said. "He's one of those guys that made us all want to coach when we were younger, made it exciting. Coach Bowden threw the ball before most people were inclined to."

Leach broke another record in his first appearance at SEC Media Days on Wednesday: Fewest words deployed in his opening statement.

Leach gave a 31-word statement: "All right. I'm not a big opening statement guy, and plus you guys are going to ask whatever you want to know anyway, so let's just go ahead and get started."

When a reporter began asking Texas A&M Coach Jimbo Fisher about a report in the Houston Chronicle that Texas and Oklahoma had expressed interest in joining the SEC, Fisher cut in.

"I bet they would," Fisher said, eliciting laughter. "We've got the greatest league in ball."

Texas A&M Athletic Director Ross Bjork said SEC athletic directors had not discussed expansion and that the Aggies would not be in favor of it.

"We want to be the only SEC team from the state of Texas," Bjork told SI.com. "There's a reason why Texas A&M left the Big 12, to be stand-alone and have our own identity. That's our feeling."

SEC Commissioner Greg Sankey dropped some knowledge when he announced the Vanderbilt helmet on a table beside the speaking dais was the helmet actually worn by first-year Vandy Coach Clark Lea during his playing days.

"I always dreamed of having my helmet wind up in the College Football Hall of Fame," Lea said. "So it being here shows I came up short of my dreams. But I'm glad to have my old headgear here at my first media days."

Vanderbilt defensive lineman Daevion Davis, asked whether he knew the helmet beside him belonged to Lea, used the question as a way to crack on his new coach.

"It's pretty ancient when you think about it," Davis said. "I just saw him walk in. Also, his head is huge. This helmet is ginormous."

Alabama Coach Nick Saban had fun with a reporter who asked him whether the college game might be changing with more teams employing "12" personnel, which is one back and two tight ends in the formation.

When the reporter mentioned two tight ends, Saban replied, "Two tight ends and two receivers or one? I'm just kidding. I know what 12 personnel is."

A reporter asked Mike Leach if he came close to being named Tennessee's head coach in the winter of 2017-18, when the Volunteers' search turned chaotic in looking for a replacement for Butch Jones, the current Arkansas State University coach.

Athletic Director John Currie communicated with numerous candidates but was fired after returning from a flight to Los Angeles to talk to Leach. He was replaced as athletic director by Phil Fulmer, the former long-time head football coach, who eventually hired Jeremy Pruitt.

"I talked to Tennessee, but that thing never, well, nothing ever got nailed down," Leach said. "Then pretty soon, they had a coup d'etat there. You guys can sort that among yourselves, but that's pretty well-documented. ... So, yeah, I didn't end up in the middle of the coup, so lucky for me."

Nick Saban's appearance at SEC Media Days on Wednesday was his 14th at Alabama and the 19th of his career, which is in second place among SEC coaches.

Only Steve Spurrier, who attended 23 SEC Media Days events as the coach at Florida and South Carolina, has been to more.

Mississippi State Coach Mike Leach, talking about the 2020 experience, said he was looking forward to full-capacity crowds, and that teams and coaches got tied of seeing "cardboard people" in the stands.

A few minutes later, a reporter who covers LSU, took advantage of the reference to ask about Leach's first game back in the league, a 44-34 victory over the Tigers that featured a league-record 623 passing yards.

"Speaking of cardboard people, do you think you and your offense maybe got a false sense of where you were after that LSU game, and what did teams do to adjust to it so quickly after that?" the reporter asked.

Monte Kiffin, 81, is working on the Ole Miss staff for his son, Lane, as a defensive analyst.

The elder Kiffin has had a long and distinguished coaching career, primarily as a defensive coordinator, in college and the NFL. He was defensive coordinator for Coach Lou Holtz in 1977-78 when Arkansas was a combined 20-3-1, and beat Oklahoma 31-6 in the 1978 Orange Bowl.

"My dad's doing well, thanks for asking," Lane Kiffin said on Tuesday. "He changed people's lives by how he coached them and how he cared about them. So it's awesome to have him around.

"He's still there, first one in the office every day. Pretty cool. Pretty cool example for young coaches."

Monte Kiffin has worked on his son's staffs at Tennessee, USC and Florida Atlantic. He will be inducted into the Tampa Bay Buccaneers' Ring of Honor this fall. He was the Bucs' defensive coordinator when they beat Oakland 48-21 to win the Super Bowl to cap the 2002 season.

"For us, there are no cheat codes to winning," Lea said. "You can't simply hack your way to sustained success. We have to go the long, hard way, but we're going to do it together at Vanderbilt, and that's what's going to make this special."